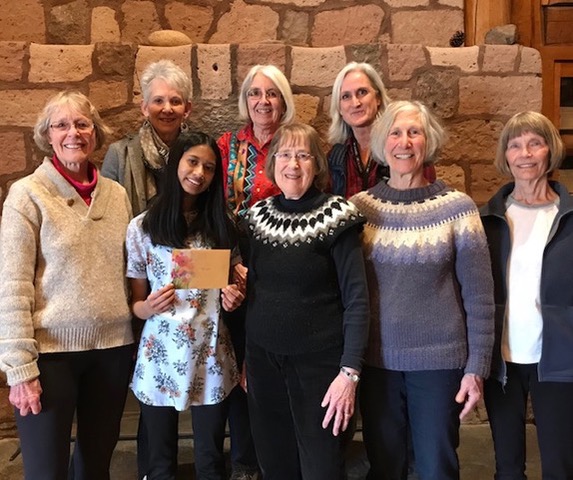 Phiippa Fung, a freshman at Los Alamos High School, is the winner of the League of Women Voters essay contest celebrating the centennial of women’s right to vote. She won the award of $400, and the League judges were delighted to acknowledge her grasp of the history that led to the ratification of the 19th Amendment.

The essay topic asked “What Were Challenges That Women Faced in Gaining Voting Rights? What Obstacles Do Potential Voters Have Today?”  The League’s history began on Feb. 14, 1920, when it was officially founded – six months before the 19th amendment was ratified to grant women the right to vote. It was created by suffragists who wanted the newly enfranchised women to cast educated votes.

But Philippa went beyond this simple history.  She told the League that as she got deeper into her research on those “challenges that women faced,” she was surprised to learn, “It wasn’t just men who opposed women’s right to vote for a hundred years; many women did, too. [Women fighting for the vote] is something different from what you might usually think of. That resistance was an important part of not getting the vote—you heard that men resisted, but you hadn’t heard about women resisting.”

Philippa said that understanding the history of women’s suffrage is a topic that’s still relevant in our lives today. “Most people want to vote, and with women’s suffrage, it’s cool how we’ve changed our point of view over the years.” But the importance of having a vote is still a critical civil rights issue.

As she researched these voting rights, she discovered that in 19 states felons who have served their full sentences still have no right to vote. “I think on balance, felons, under certain conditions (especially those who are improving their lifestyle)—should be allowed to vote again. I think every citizen of voting age should be allowed to vote.”

It’s not surprising that Philippa won the LWV Voting Rights essay contest. Along with multiple music competition awards, she won a Rotary Essay Contest when she was in middle school, and her sixth-grade design on the side of one of the County waste trucks reminds people to Reduce, Reuse, Recycle. She also plays the piano and viola, is active in her church youth group, and is a member of the LAHS Speech and Debate Club.

When asked how her brain works, she said, “It depends on what subject I’m doing—writing and memorizing stuff clicks more easily than math. I’m interested in current events and I like watching to see what happens. I enjoy seeing what other people think about current events. I think it’s cool to see how the system works. My favorite subject depends on the year—this year it’s history.” It’s no surprise that she also “likes writing a lot” and leans toward becoming an author of children’s books.

As all of us today stand on the shoulders of those who came before, the League of Women Voters of Los Alamos is honored to stand with Philippa Fung as she joins her generation to stride into the future that they, with our support, will create. As Philippa says, “We, as Americans, must push past these barriers to create free and equal voting rights for everyone across the country.”

Men as well as women can join the League of Women Voters of Los Alamos and continue the tradition of educating voters. For more information on the League, please see http://www.lwvlosalamos.org/

Women across the United States fought for decades for the right to vote, finally achieving this goal in 1920. They encountered numerous obstacles across their long journey, both from other women and from more preeminent national affairs. But such struggles did not end in the early 1900s. Since then, people groups such as African Americans and Native Americans have fought in turn for voting rights, and now, Americans convicted of felony are trying to cross a legal bar as they fight to regain their voting rights as well.

Once the battle cry was sounded and Americans realized that women were capable as well as deserving of voting rights, there were still countless hurdles that women fighting for suffrage had to face. First, many women themselves opposed their own suffrage for reasons such as were held by dissenting men too. They stood firmly in line with the belief that a woman’s place was in the home and community, not the national public. Some distrusted politics altogether and thought that, when given the right to vote, male politicians would take advantage of and manipulate them. Already, because of a woman’s involvement in their community, women did have a political sphere of influence.

Anti-suffragists claimed that this subtle reform was a solely feminine way of changing politics, and that the states depended on it, so there was no need to change. On a different note, many women opposed suffrage just because they enjoyed the domestic role of a woman and because they felt that it was a man’s job to vote and act in public positions. Society ran on the order of separate gender roles, and, if women gained the right to vote, it would disrupt this order. One anti-suffrage pamphlet said that, “it is a fatal mistake that these excellent women make when they conceive that the functions of men are superior to theirs and seek to usurp them.”

Furthermore, higher-class women were against their right to vote because they believed it would take away some of the political power and privilege that being wealthy and powerful naturally came with. According to an 1894 New York Times article, “to give women the suffrage would only increase the ignorant vote and bring refined women into contact with an element that should not be brought into their lives.”

Second, the issue of women’s suffrage lost its long-lasting interest when the Civil War began in 1861. Most suffrage activity was suspended and women waited for the war to end; however, others, such as Elizabeth Cady Stanton, immediately began to support the abolition of slavery because they calculated that it could lead to universal (and therefore women’s) suffrage. Besides that, individuals such as Frederick Douglass and Lucy Stone believed that the 1860s was the time for African American freedoms and privileges; adding women’s suffrage into the equation would ensure that neither happened. Women such as Stanton were determined to prove them wrong and established the Woman’s Loyal National League, which petitioned President Abraham Lincoln to broaden his emancipation of slaves into emancipation for everyone.

The Fourteenth Amendment, which was implemented as a result of the Civil War, only gave voting rights to male citizens, however, and the Fifteenth Amendment extended that right to African Americans (males). This left many women suffragists outraged, as they had been fighting for their right to vote for so long and – suddenly – America’s male former slaves had achieved it before they had. In short, because America was focused on the Civil War and giving African Americans rights (which is a right and good thing), women suffragists had a delay in gaining their own voting rights.

Today, many potential voters have obstacles too. Felons are one such example. From the beginning, felons lost the right to vote during and even after their prison sentence was over; now, however, the United States is rethinking this statute and many states have given ex-felons back their voting rights. Because the right to vote is fundamental for a country like the United States, which is grounded on democracy and equality, a felon who has paid the price for their actions should be allowed to vote again. Taking this right away both (1) violates guaranteed rights as an American citizen and (2) widens the racial divide that the United States has.

Unfortunately, racism is one of the many barriers that felons have to face as they look to gain back their voting rights, which traces back to the disproportionally high number of African Americans in the justice system. Today, even though African Americans only make up 13 percent of the population in the United States, they make up 38 percent of all the Americans who have had their voting rights taken away because they are a felon. Vera.org states that, “These laws [taking away felons’ voting rights] have a significant disproportionate impact on black people, who are overrepresented in the criminal justice system. An estimated one in 13 black Americans does not have the right to vote due to past convictions—four times the rate of other Americans.”

This systemic racism began in the Reconstruction Era, just after the Civil War ended. First, the Fourteenth Amendment made it clear that, while all male citizens could vote, those who had been convicted of a crime could not. Some states, as a result, formulated their laws so that they applied to crimes that African Americans supposedly committed more often, and not to crimes that Caucasians engaged in more often; states such as South Carolina, with a higher population of African Americans, also enacted harsher laws. Now, while many states are beginning to reform, felony disenfranchisement still exists and revision is incomplete.

In conclusion, throughout American history, different people have had challenges in gaining the right to vote. Women, for instance, faced opposition from other women as well as distraction during the Civil War. Even now, felons across America who have fairly borne the consequences of their criminality are facing obstacles as they fight for their rights. We, as Americans, must push past these barriers to create free and equal voting rights for everyone across the country.