White “Will Do A Fulltime Job For The Part-Time Pay” 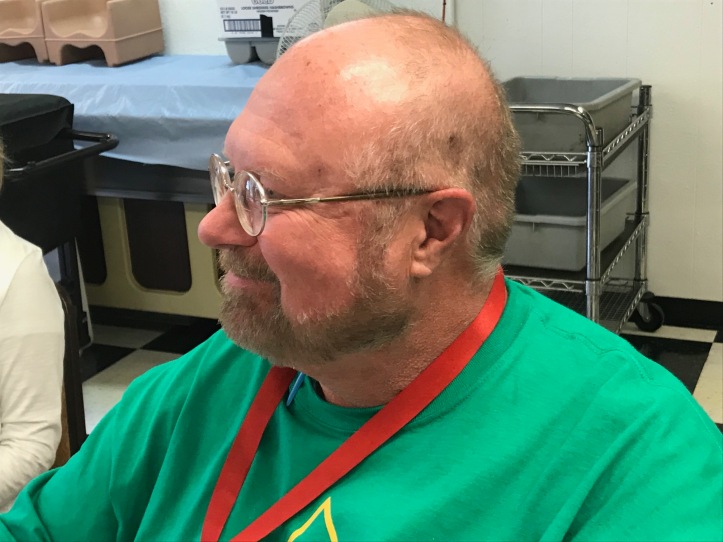 Independent candidate for Los Alamos County Sheriff  Greg White listens to one of his opponents at Saturday’s candidates’ forum at the American Legion. Photo by Maire O’Neill/losalamosreporter.com

Independent candidate for Los Alamos County Sheriff Greg White says he is set apart from the other contenders for the office by a couple of things.

“I’m also, and I think most importantly, other than my good friend Mr. (Joe) Granville, the only one who is doing anything actively to do something to help our community. I have been talking to people ever since I started collecting signatures months and months ago to even get on the ballot about the problem we have in our community of suicide,” he said.

White said unfortunately a week ago the community lost another valuable member of our society “to that terrible thing”.

“We have, if you ask any of the parents of teenagers, a terrible problem with this among our children and you can see on my webpage the reason why it’s such a heartfelt cause to me,” he said, adding that his webpage contains links to sources of help and that he places daily words of encouragement on his Twitter account.

“My webpage shows a side of me that has not been portrayed in the media,” he White said.

White said there were some comments Saturday at the American Legion candidates forum in which he also participated that the Office of Sheriff is not a social service organization.

“I think that’s one of the reasons my campaign motto is, “Experience matters’. Even here in Los Alamos, if you talk to any of the officers, they don’t sit in their patrol car all day waiting for there to be a bank robbery. They’re out in the community, doing things like we had the other week with the loss of a missing child and the anxiety and trauma that’s causing the parents. They’re often first responders to accidents and incidents where they’re accompanying people who have just experienced a traumatic event. They deal with the homeless, drug addicts, people that are chronically drunk, and the list goes on, ” he said. “If law enforcement is not a social service, I don’t know what is. They are always the first people who are dealing with a problem before these people are referred to another social service agency.”