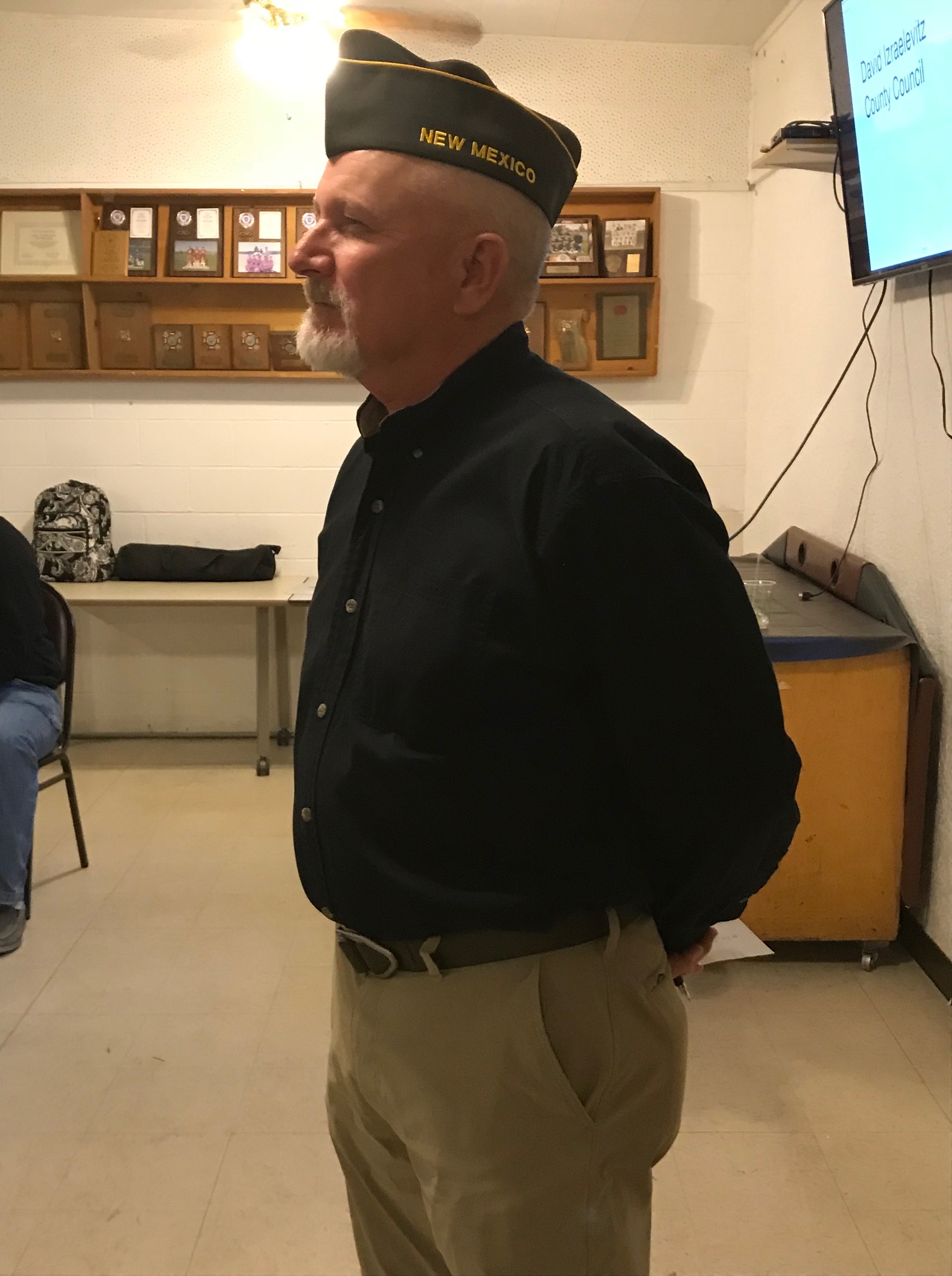 Veterans of Foreign War Post 8874 Service Officer Ed McDaris watches the proceedings Monday evening at the VFW candidates’ forum. McDaris was the moderator for the event. Photo by Maire O’Neill/losalamosreporter.com

House District 43 candidates Democrat Chris Chandler and Republican Lisa Shin both participated in another candidates’ forum Monday evening, this time at the Veterans of Foreign War Post which served to show the both their platforms and their campaign styles.

Chandler, whose name was drawn to speak earlier in the evening, said when she arrived in Los Alamos 25 years ago she immediately got involved in civic .

“I found that it was it was very easy to do so because the community was filled with people who want to support the town and make it a better place and I thoroughly enjoyed participating with other citizens to try to improve the community and lift it up,” she said. “The thing that I love about Los Alamos is it’s filled with people who are engaged. They have a lot of diverse interests, so they may be a physicist at the Lab but they might also be a mountaineer, or a woodworker or a gourmet cook and they organize groups to have discussions about all these wonderful, interesting things.”

Chandler said the community is filled with people who have a lot, but they give a lot.

Chandler said her platform centers primarily on trying to bring up the state and that that means “bring up all of us” – those in Los Alamos and those in less-advantaged communities in the state.

“Key issues to that goal are improving the state’s educational system so that every child receives an adequate education. We know that that is not happening now and we all have to work together in the legislature in a bi-partisan way to make sure we take the bull by the horns and turn that around right now,” she said, adding that next year is going to be a big year for education.

“We all have to focus on that and make sure that it’s a moonshot activity. What do I mean by that? It’s like putting a man on the moon. When everybody comes together, puts a laser focus on what needs to be done and cooperates to ensure that it happens,” Chandler said.

She said she would also like to improve healthcare which is also a very important thing for veterans who although they receive services through the federal government, experience gaps in that care and that she thinks there is an opportunity to improve healthcare for everyone. She said vocational and technical training is something that needs to be worked on and that it will help veterans.

“When you leave the service you need support and education and certainly vocational and technical education will help you,” Chandler said. “We are in dire need of substance abuse and mental health treatment facilities for everyone and that includes veterans. I know you all receive VA services but I’m not sure if they are adequate or timely,” Chandler said.

She said as a Los Alamos County councilor she has worked hard to listen to residents, do her homework, study the issues, process that information, turn it all around and come up with compromises.

And that’s how I’m going to do my work in the state legislature,” she concluded.

Shin also addressed the veterans present telling them the state legislature has a responsibility to ensure the concerns and needs of their community are addressed properly.

“Like the VFW, I am committed to ensuring the rights that are guaranteed by our constitution, promoting patriotism, serving our community and advocating for a strong national defense,” she said.

“As you might know, our president signed a $55 billion legislation to reform the Veterans Administration system so that veterans can get the care that they deserve. This is great news,” she Shin said.

She said both the VFW and the American Legion have applauded this legislation and that she is particularly excited about it because it reflects something she wants to do.

“A lot of these things can be implemented at the state level. It does address mental health, it does include $400 million to fight the opioid crisis which of course is devastating families and communities here in New Mexico. It also sets up mobile clinics which was really exciting to me. I would love to see an eye clinic as part of that VA mobile initiative,” Shin said. “It also lifts the restrictions on telemedicine and I’m really excited about this because I believe that really high-quality telemedicine is the future and we have to embrace it and this bill includes provisions for telemedicine for the VA. I am very excited about this.”

Shin said the legislation also includes scholarships for medical students and allows veterans have access to private doctors for their care.

“I think that is the way we should be going. Veterans deserve choices when it comes to their care. If there is a failing in the system in their area, why shouldn’t they go see a private doctor. I’m very excited about this,” she said.

“On one side we have more government, higher taxes and financial pain. On the other side we have less government, lower taxes and financial prosperity. I am the one who launched a successful campaign to keep property taxes low in this community and limit the reach of government. I signed a taxpayer protection pledge because I’m going to fight taxes,” she said. “I want the government to find more effective and efficient ways of doing things and I oppose the internet sales tax. We already get taxed on our Amazon purchases. We are not interested in getting taxed on every internet purchase. Many of us in our district do a lot of internet purchases. I’m also opposed to the gasoline tax hike. I don’t think that commuters will really appreciate the gasoline tax hike.”

Shin said a couple of months ago the County met to discuss the budget shortfall and that there was no talk of decreasing expenditures and seeing if things could be done in a more cost-efficient way.

“Instead they determined which taxes they could raise without the citizens’ vote. That is not my approach,” she concluded.

Asked about her position on education, Shin said she would love to see reading proficiency legislation.

“We need to make reading a priority in the state. Without that it is very difficult to have our kids succeed. If they don’t have the reading, they’re not going to get the vocational and vocational is one of the parts of my platform. They can’t get a really good job which moves them forward in life. I really feel we need to make this a priority for our state. It seems like there’s a battle of wills – the governor wants something and the legislature wants something else and the unions want something else and I think we all need to come together and say this is a priority. We need to do it. We may need to give up a little bit – give and take – but I think that reading proficiency is essential,” Shin said.

Chandler chose to address pre-K education because she said it addresses the needs of disadvantaged children who don’t have access to various enrichment programs, who don’t have parents who read to them, or teach them their alphabet.

“Without pre-K , you’re not going to succeed in a reading program. To get to a reading program you have to make sure that the child has the foundation to be able to process what they’re learning. What studies have shown is that this state has a number of kids who start school without the adequate foundation. So let’s start with the foundation and when they get that, then they’ll be able to absorb reading and math and all the other fundamentals our kids need,” she said.