Last week the volunteers of Southwest Nordic Ski Club marked the end of another ski season by collecting shade fencing and ski-specific trail signs to put away for the summer. A low snow year and COVID-related restrictions as well as nationwide gear shortages made for a season full of creativity and perseverance.

Despite challenges, club volunteers were able to put on some ski clinics for adults as well as practices and small events for kids ski team bubbles. The club saw a big uptick in interest in cross country skiing and a big need for used and rental gear in our area. Below is the season review in captioned photos. To learn more about the club, please visit the club page, club facebook page or email SWNSKIboard@gmail.com with questions.

Volunteers started the season by hanging up several hundred yards of shade fencing in the fall to allow snow to stay on the exposed portions of the trail longer providing both safer skiing and more water absorption for the soil to help renew vegetation post fires. Photo by Dina Pesenson

Club president and volunteer groomer, Clay Moseley, drives the club machine ‘Kermit’ while grooming the trails on an evening in January. Photo by Dina Pesenson

Kids team during a practice held on the beautiful trails of Enchanted Forest XC Ski and Snowshoe Area. EFXC is always a favorite place to ski and this season it was a life line for local skiers allowing beautiful skiing without crossing state lines especially in the weeks when our own trails were too low on snow. Photo by Dina Pesenson

Volunteer Kevin Reid, ready for a long day of tree clearing and grooming after a particularly windy night greatly relieved to find little to no tree fall and trail damage for once! Photo by Dina Pesenson

Liv Niklasson channeling her Scandinavian ancestry while enjoying some downhill runs Birkebeiner-style during a particularly snowy team practice off of Camp May Road. Photo by Dina Pesenson

Diego Leonard, right, skiing to first place in the Under 12 age group stacked with stiff competition of Rocky Mountain Nordic teams at the COVID-modified Mike Elliott U14 Festival.  Photo by Dina Pesenson

Olympic biathlete, Laura Spector, who recently moved to the area, giving the kids team some inspiration and tips before their BB Gun biathlon event at the Canada Bonita Meadow. Photo by Dina Pesenson 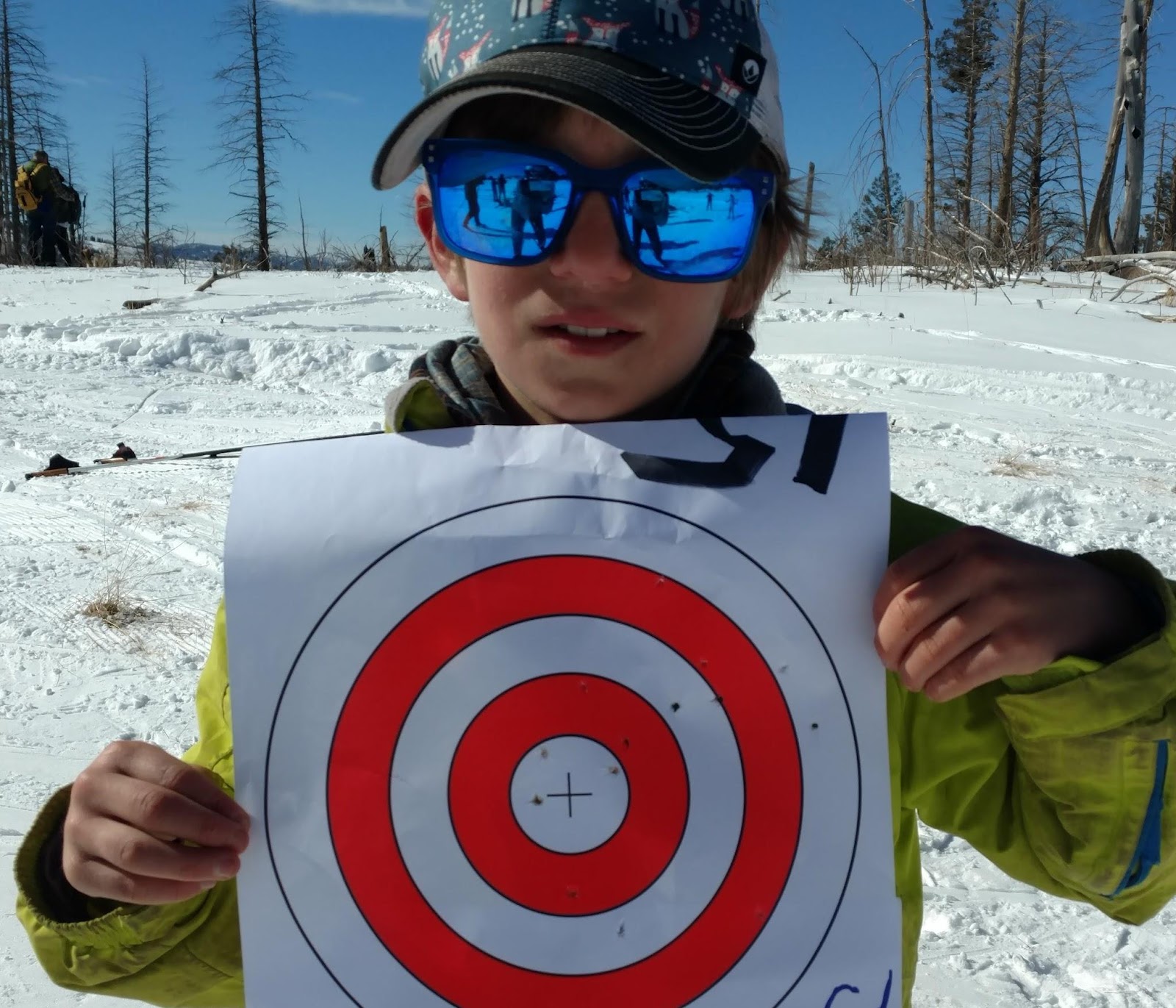 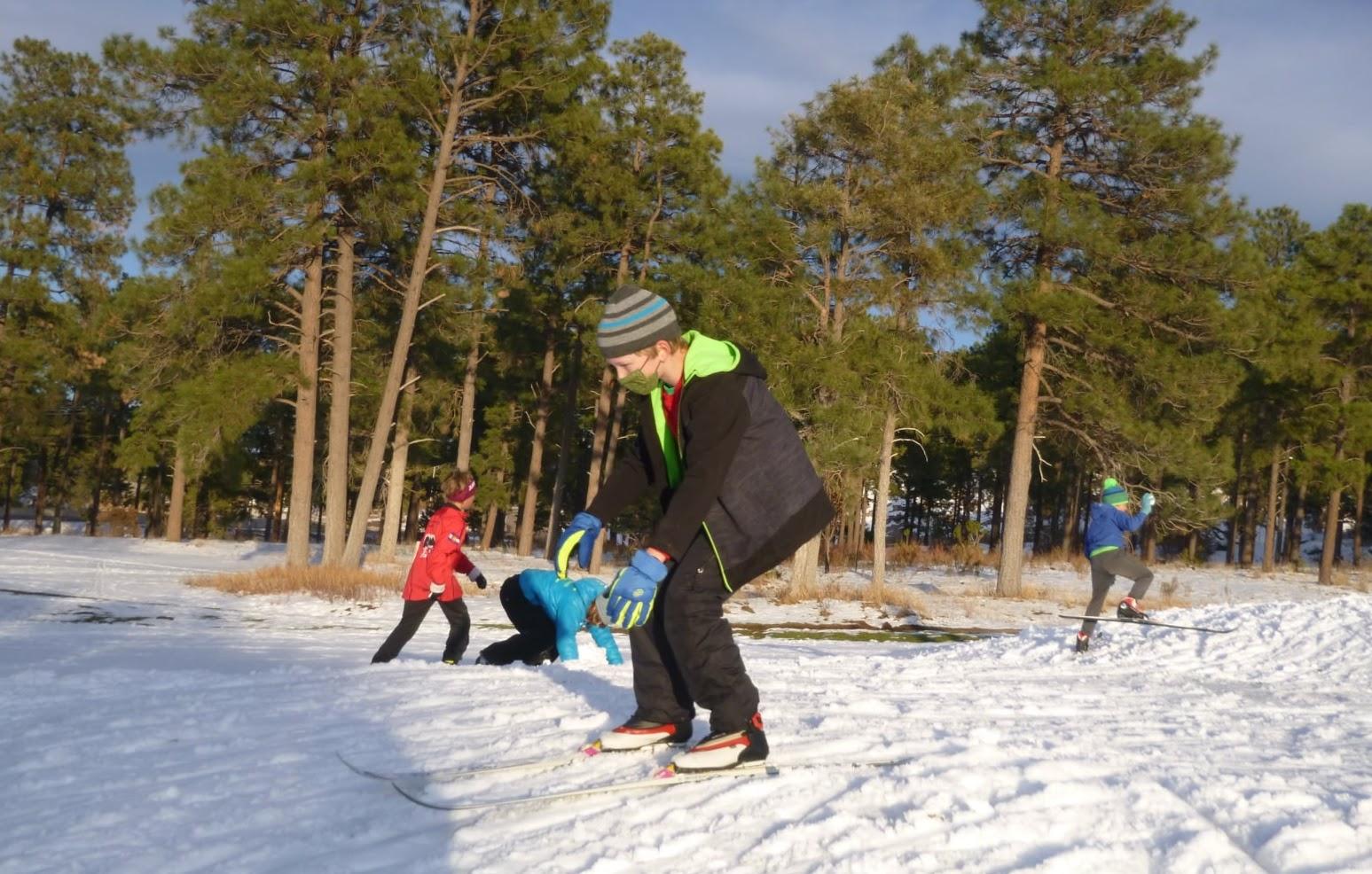 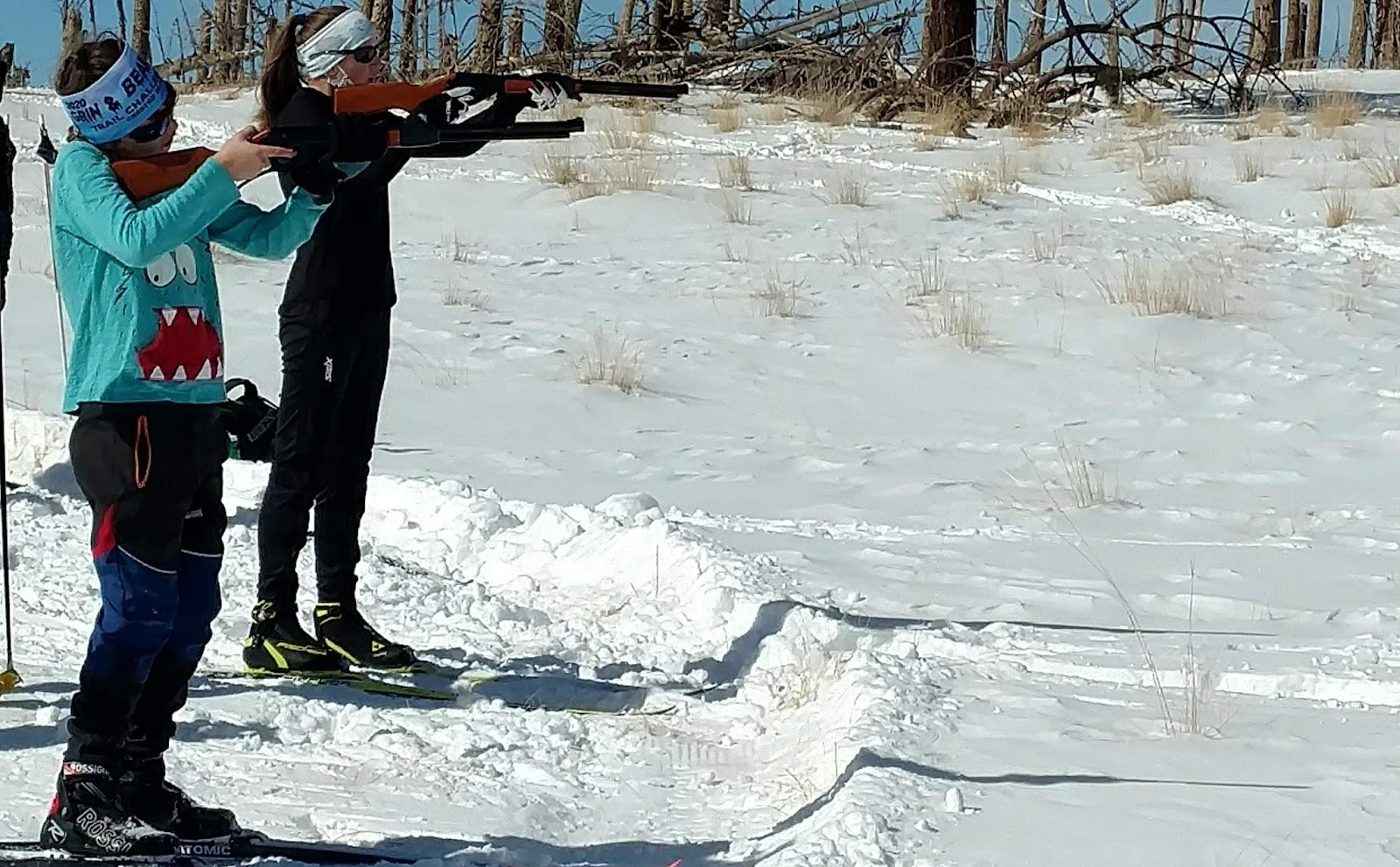 Harper Reid showing off her bull’s eye after the team’s BB gun biathlon at the Canada Bonita Meadow. Photo by Dina Pesenson 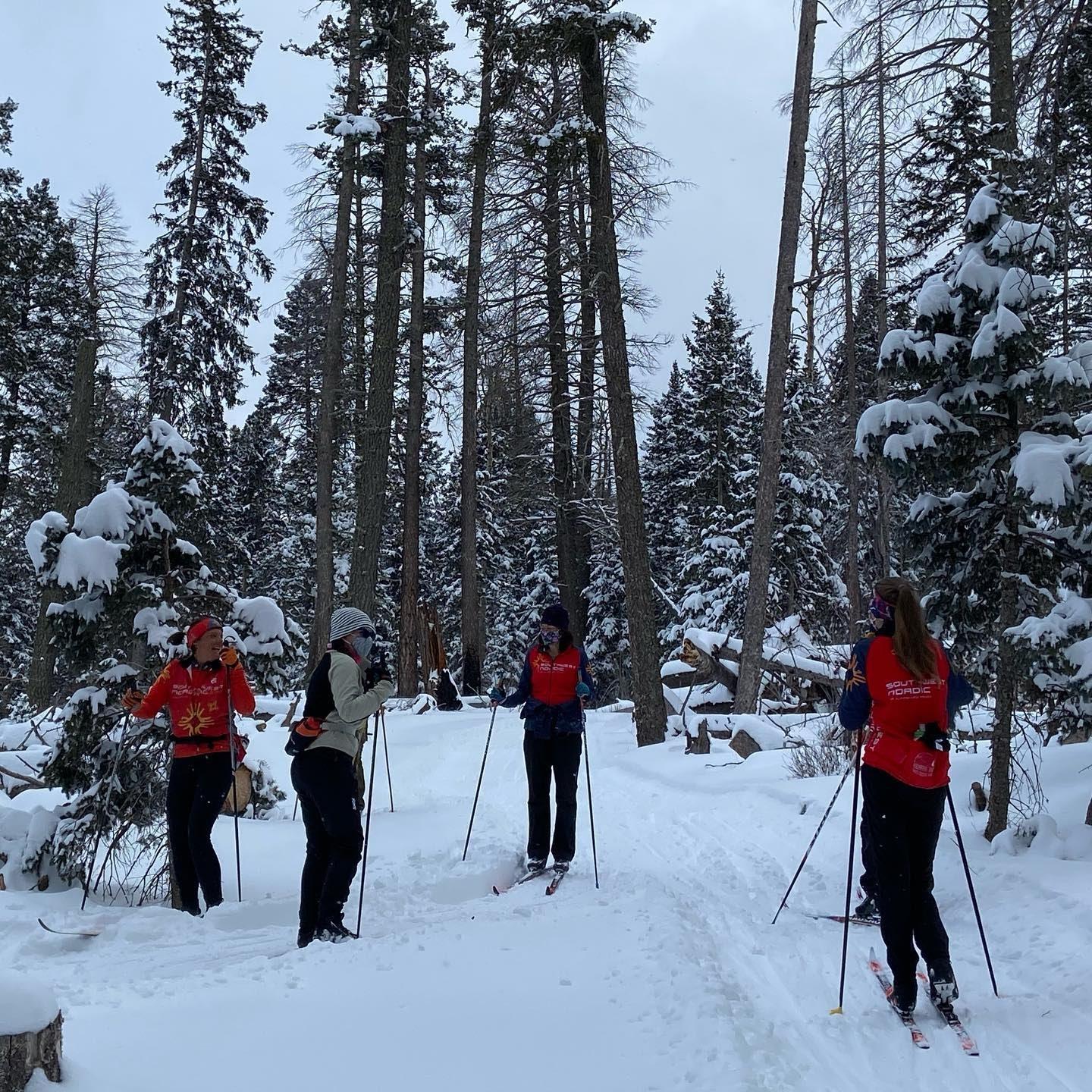 Skiers enjoying the late spring snowstorm that allowed for another few days of great skiing on Canada Bonita Trail at the very end of the ski season. Photo by Dina Pesenson 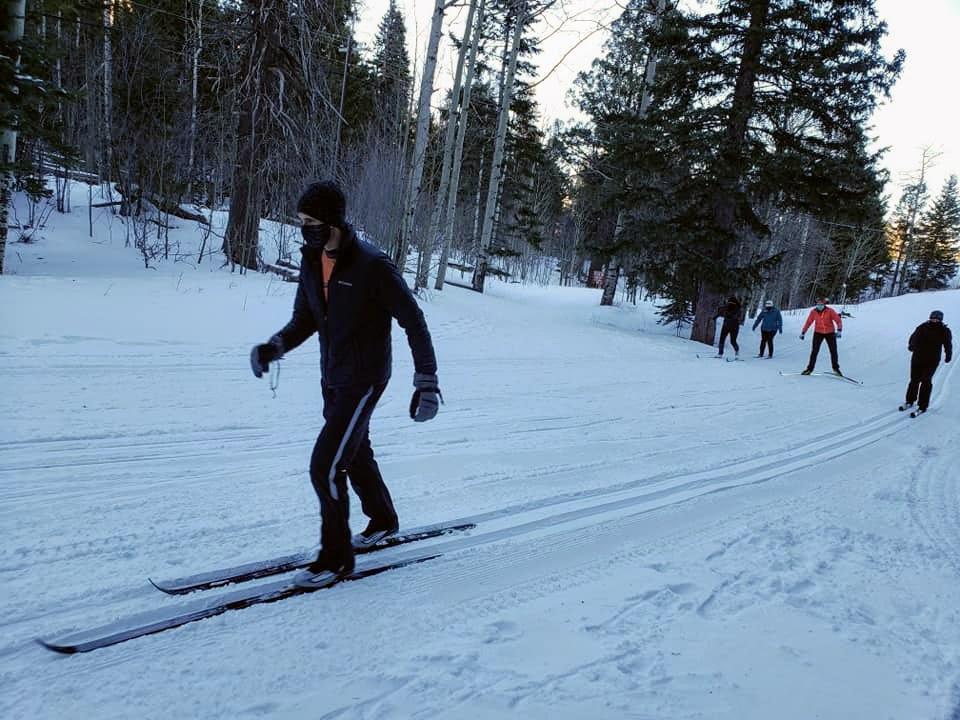 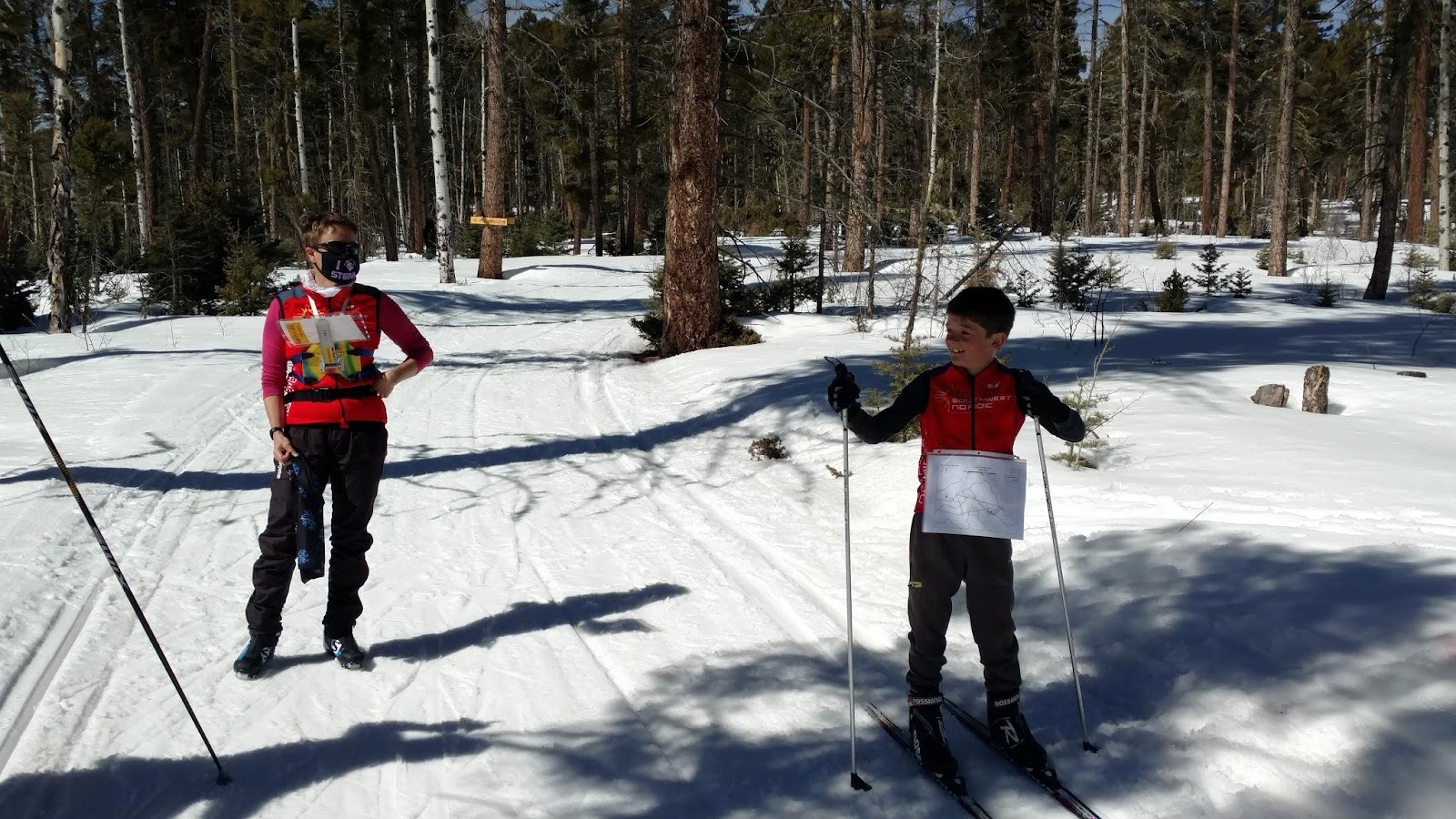 Club volunteer and ski team coach Sanna Sevanto about to send off Luke Gibson on his start of the ski orienteering team practice at Enchanted Forest XC Ski and Snowshoe Area. Photo by Dina Pesenson 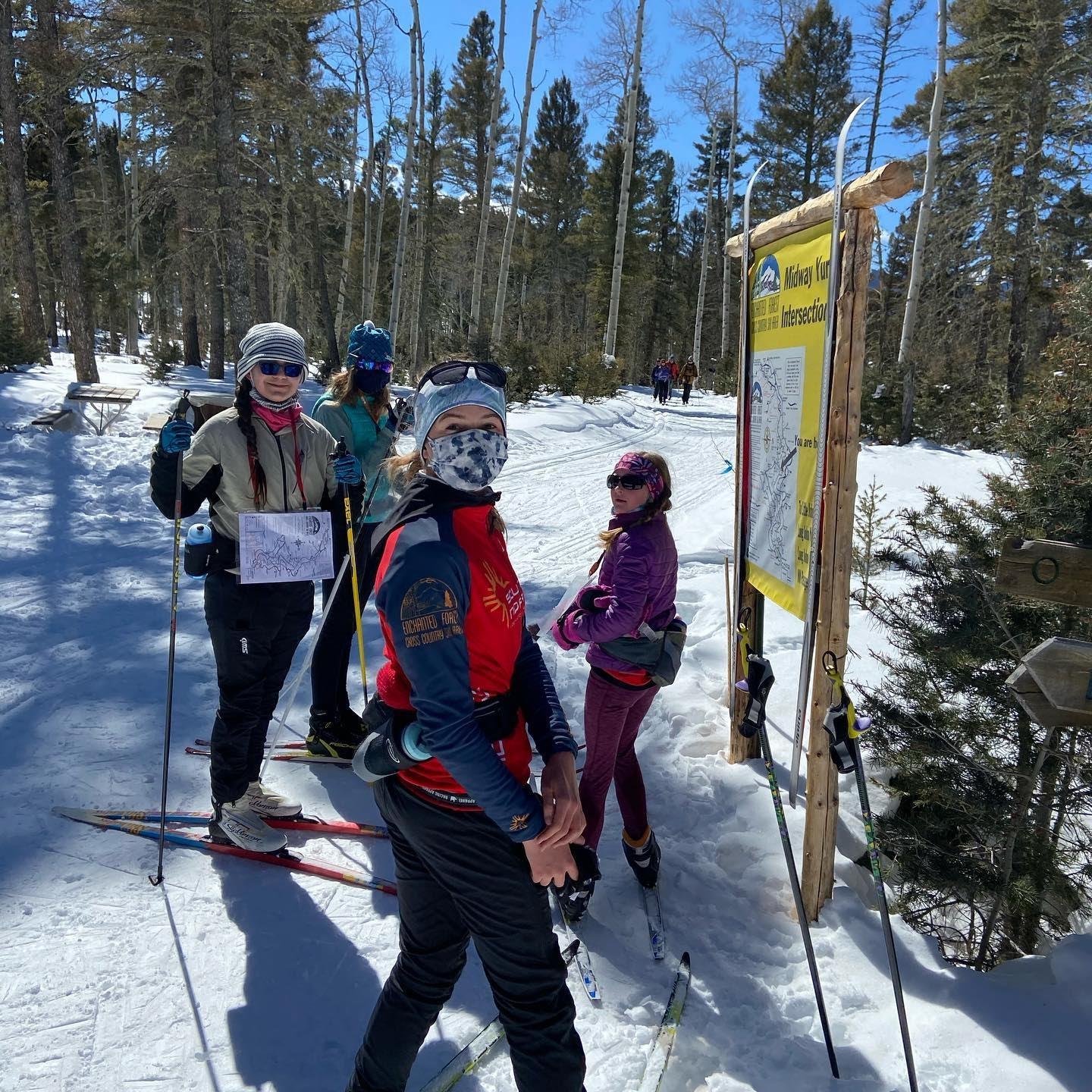 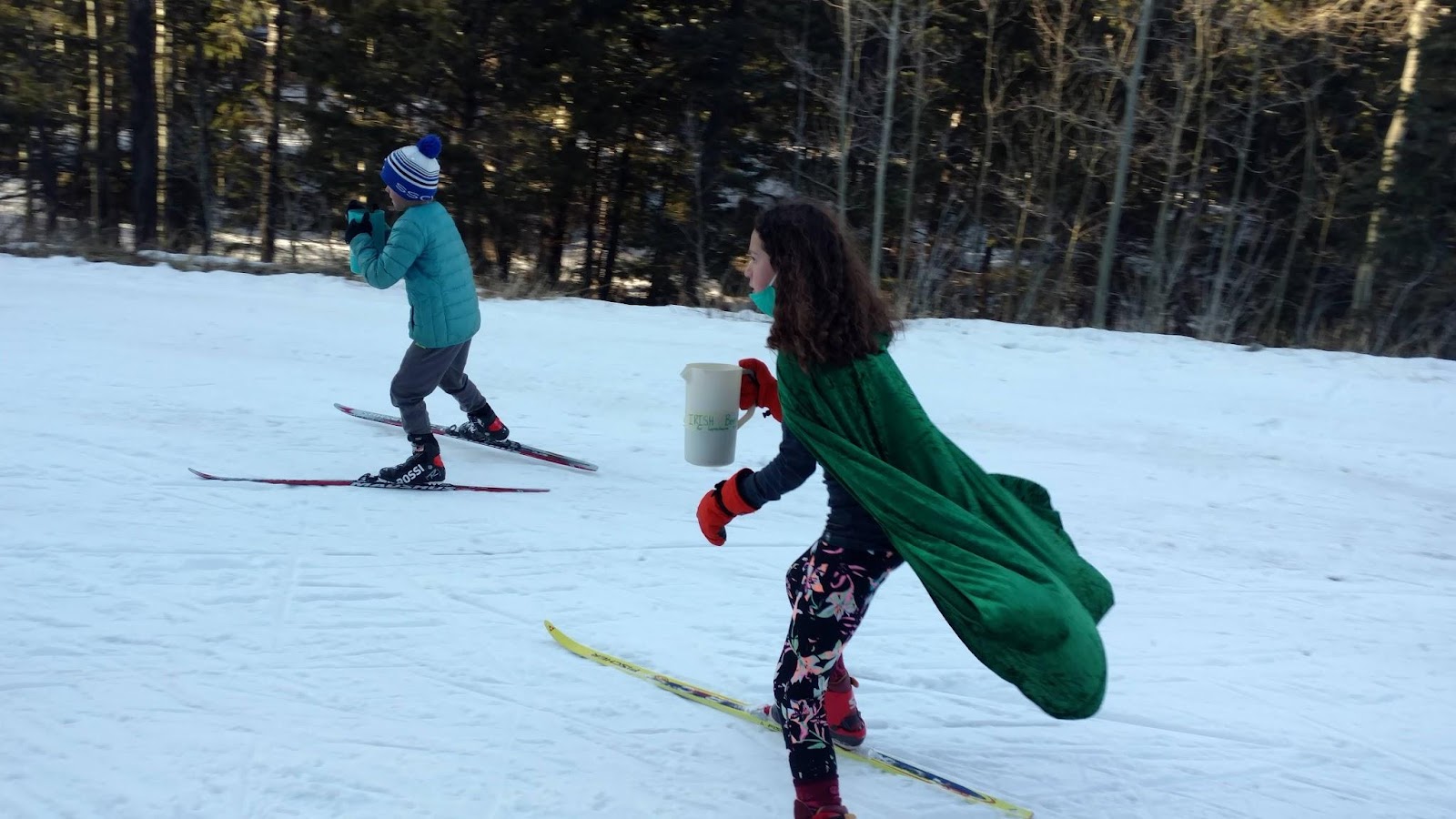 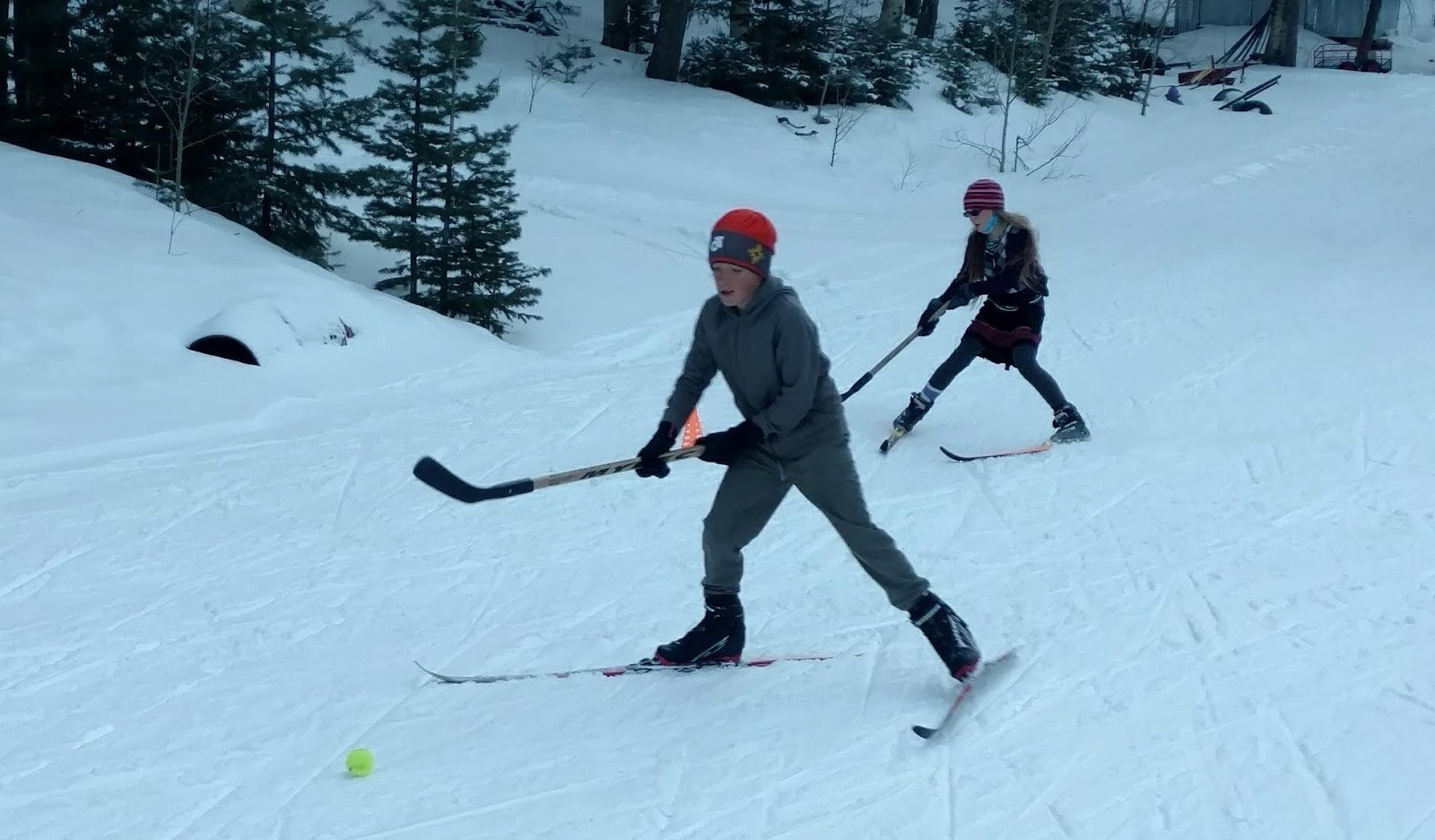 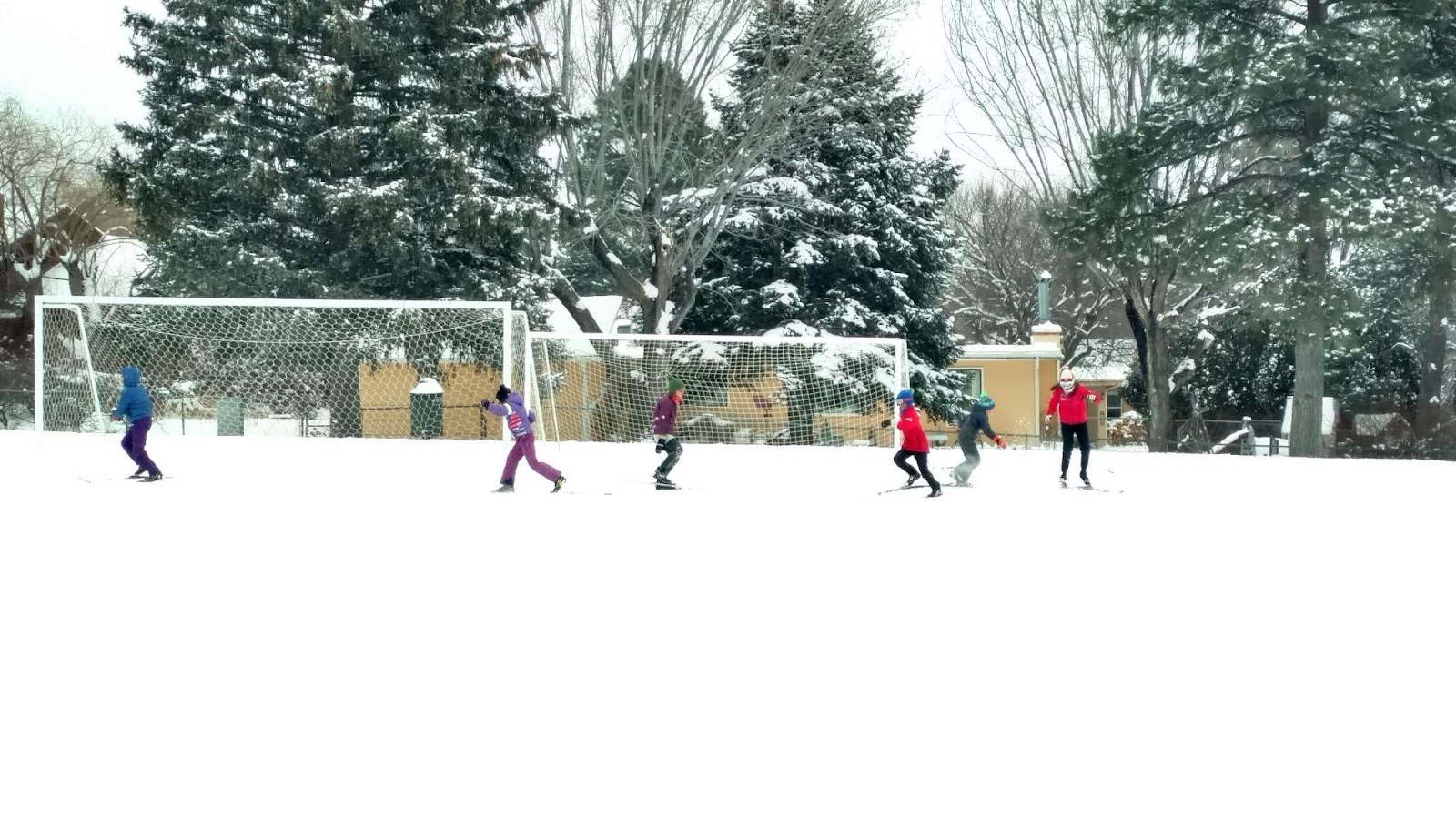 Zach Gibson coming into the finish of the Under 14 age group race at the COVID-modified Mike Elliott U14 Festival. Southwest Nordic Ski Club team had 6 kids participate in the event. Photo by Dina Pesenson 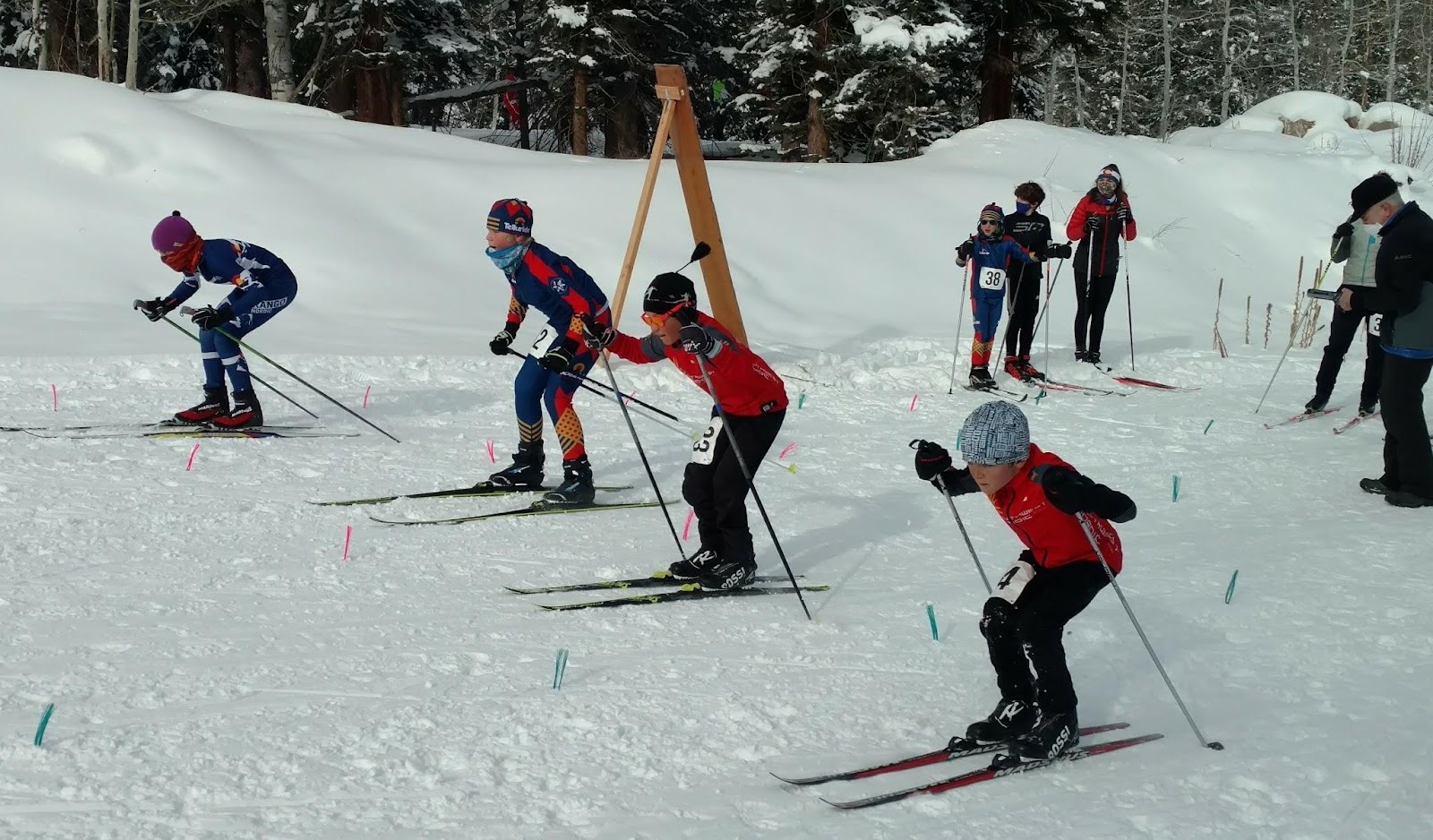 Quanah Moseley, second from right, and Luke Gibson, far right, at the start of a race. Photo by Dina Pesenson 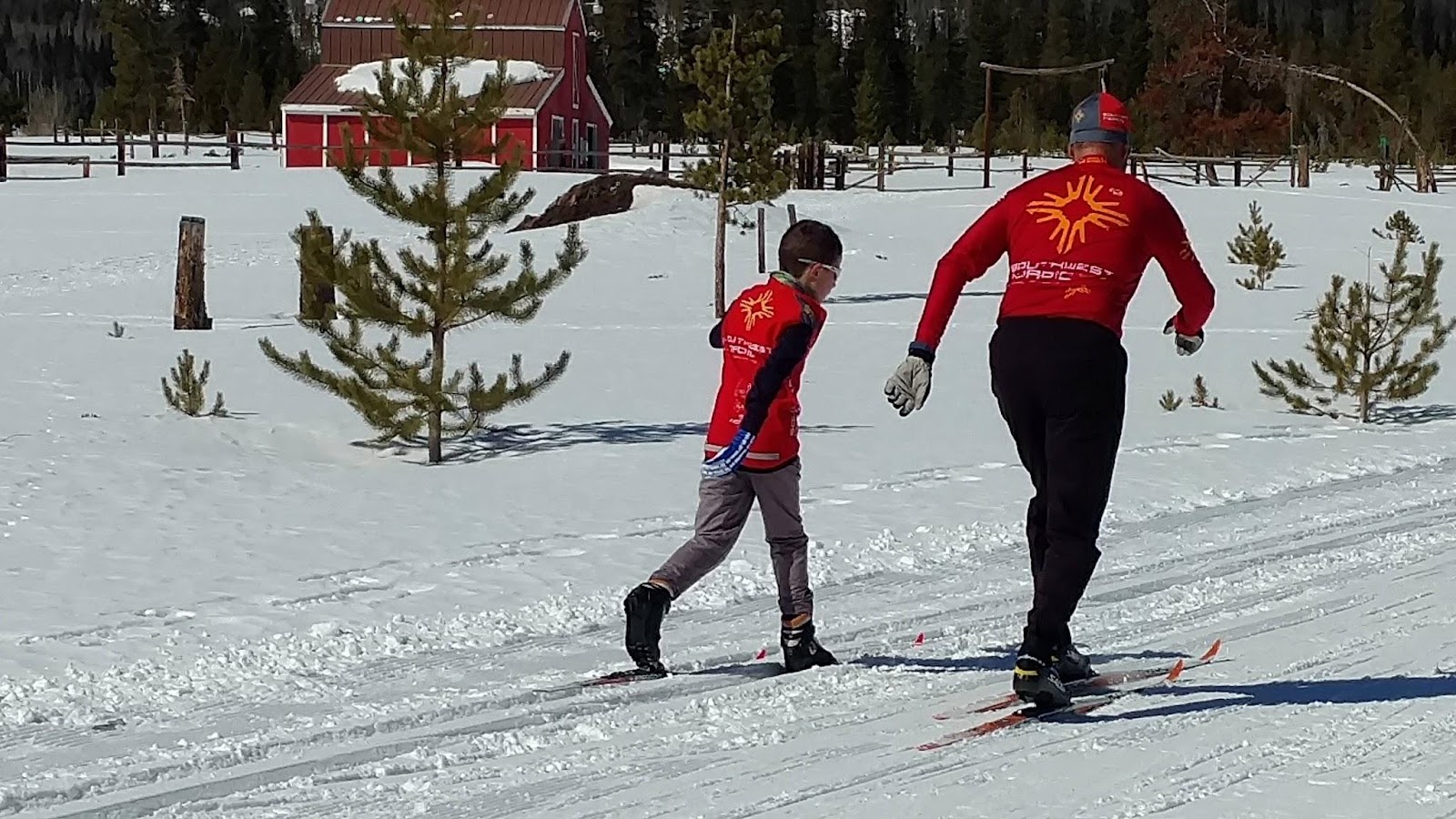 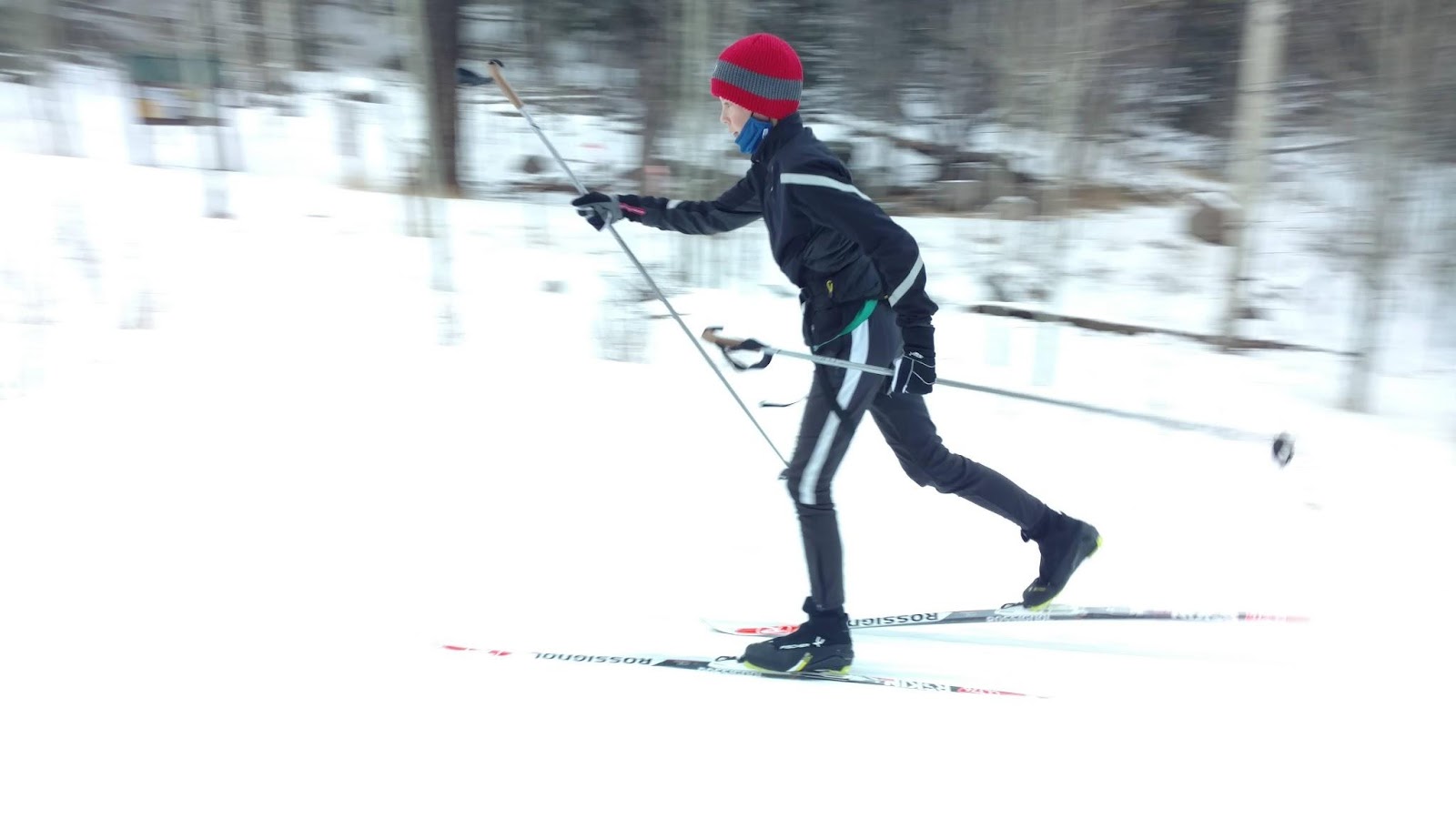 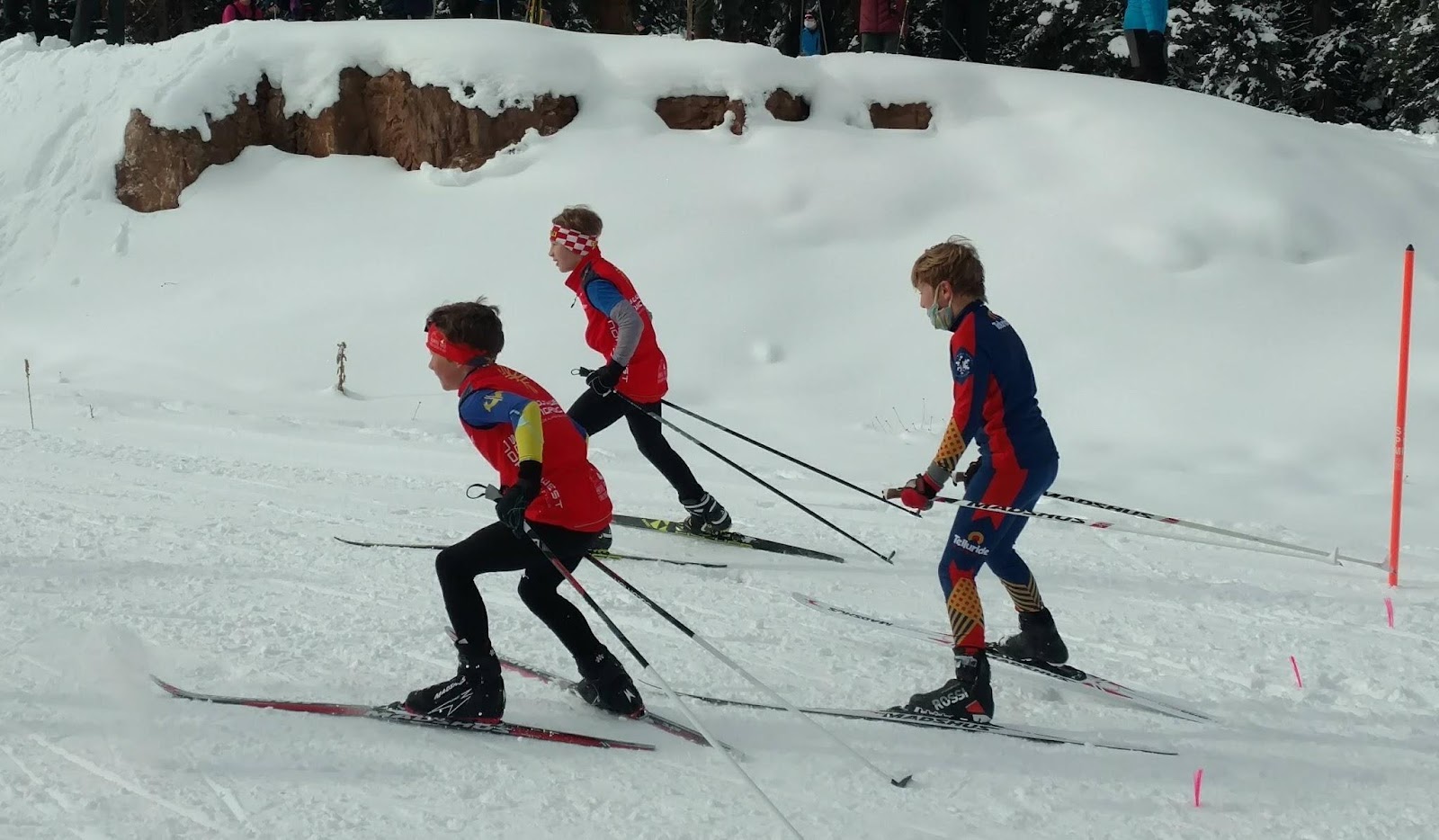 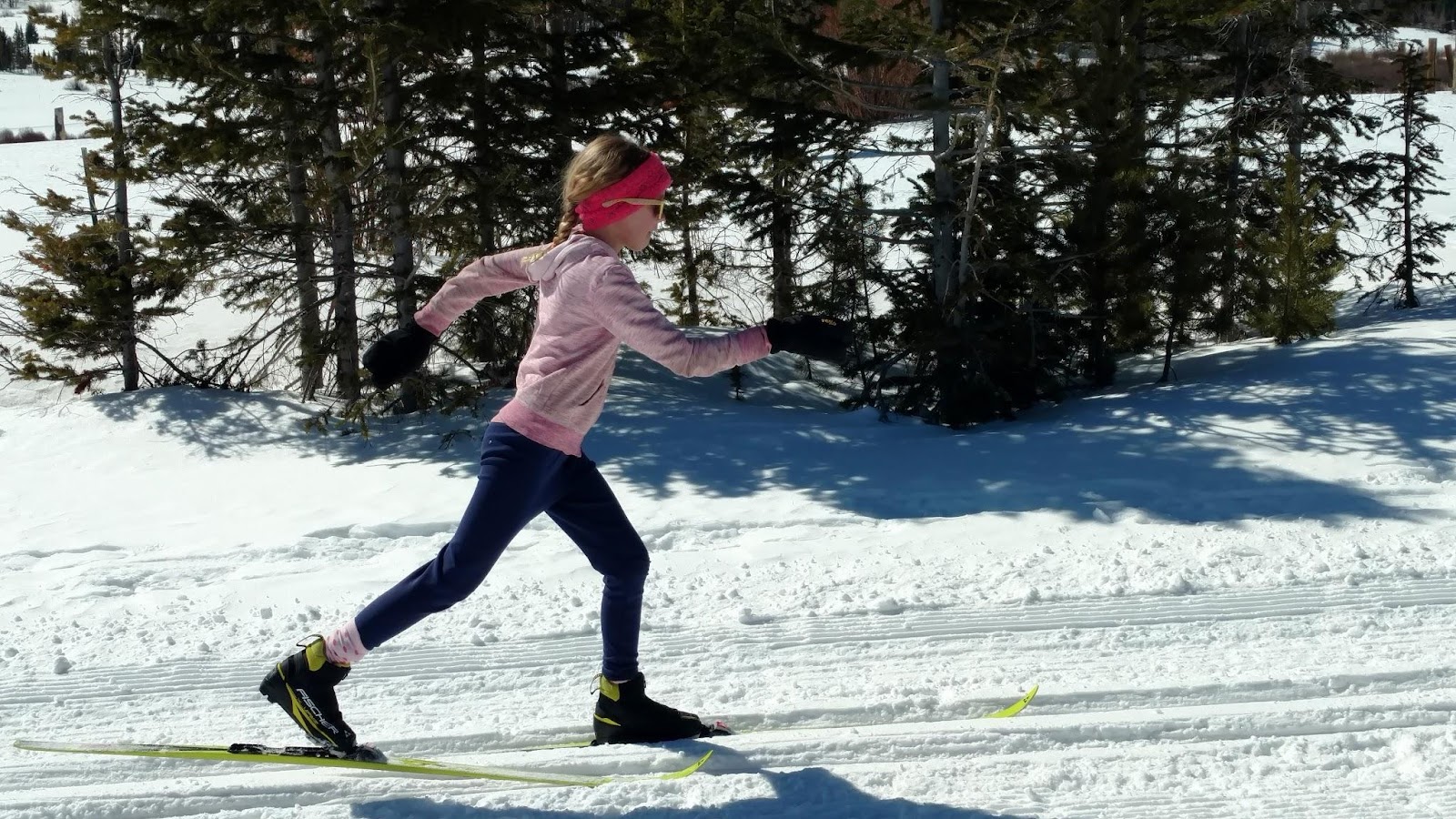