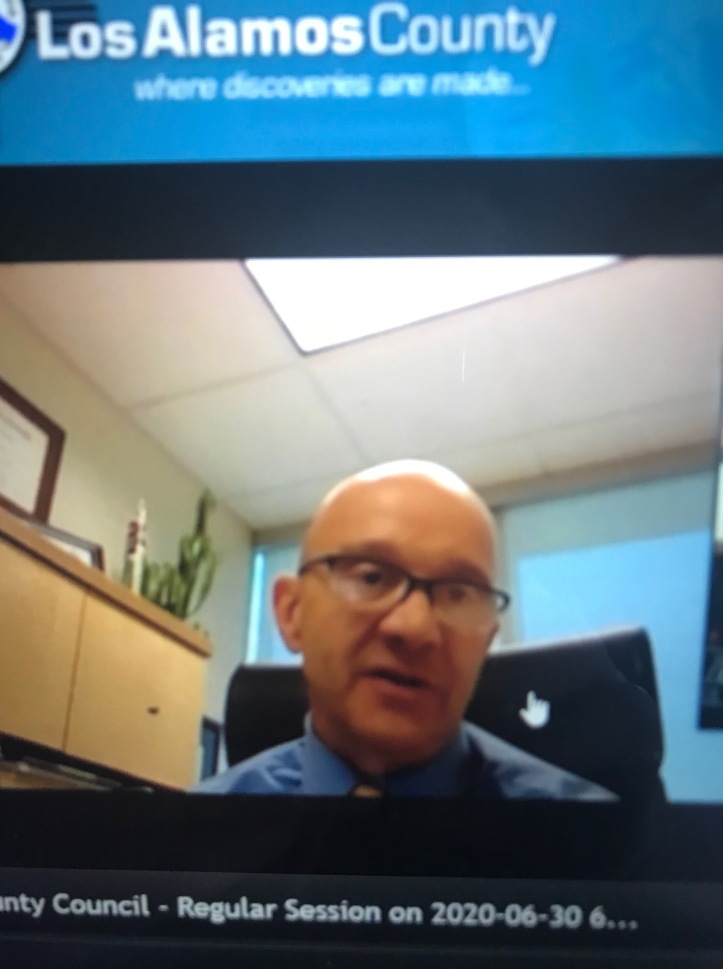 Los Alamos County Manager Harry Burgess briefed County Council members Tuesday evening on the situation with DP Road where excavation work has been unearthing contaminated materials since February on land that was transferred by the Department of Energy National Nuclear Security Administration to the County for public use.

Burgess also briefed the Regional Coalition of LANL Communities board June 19 under a June 19 RCLC agenda item when NNSA officials were unavailable. The DP Road situation has never been on the Council agenda and Burgess gave his update Tuesday evening as part of his regular County Manager’s report.

To date, nobody from DOE/NNSA or DOE/EM has spoken publicly of the situation other than former EM-LA Field Office Manager Doug Hintze who briefed Northern New Mexico Citizens Advisory Board members during their Feb. 26 meeting. See story here

As far back as Feb. 28, the New Mexico Environment Department notified NNSA and EM-LA field offices that it was “extremely concerned” about the discovery of the radiological contamination and potentially hazardous waste and “the potential threat to human health and the environment”. See story here.  Then on June 17, NMED gave NNSA and EM-LA 30 days to provide a schedule of preliminary screening plan activities. See story here.

Burgess reminded the Council that NNSA had stepped in at the County’s request and “offered to continue through one of their contractors the excavation that was necessary primarily for the lift station but also for various connecting sewer infrastructure. The lift station is for the Canyon Walk Apartments complex which is currently under construction. Burgess has previously indicated that the apartments have to have a certificate of occupancy by Dec. 31 or Bethel Development lose their current financing.

“They (NNSA) mobilized around the site and had almost completed all the work as I’m told, and then discovered additional enriched uranium is what I’ve been told. They had previously discovered uranium in the same excavation location and they were extending the west wall where that prior material had been excavated and uncovered. Whereas previously the substances have been all affixed to other materials such as glass or wood – in this instance the yellow powdery substance as it were, was actually not affixed to anything but was spread around. The picture I saw was like moss on a rock,” he said.

Burgess said NNSA immediately shut down operations when the yellow material was observed.

“They suspected what it was, given the prior discovery of uranium in that same location, however, they performed their analysis and came back with a confirmation of it being uranium. While they were doing their sampling, they did stop all the work and we also announced the discovery of this material,” he said.

Since that time given the analysis and now that they know what it is, Burgess said NNSA has determined that finding the material “does not significantly alter the work they were doing previously because they knew they were working in an area with potential contamination”. He said NNSA anticipates continuing the effort through the end of this week “with hopefully that being the completion of any excavation necessary for this infrastructure”.

He noted that NNSA received a letter from the New Mexico Environment Department requesting a plan for the ultimate cleanup of the site and gave them 30 days for that response.

“I know they’re working on that at present, however they also were attempting to address our necessary guidelines for the housing development that’s going in there and their schedule for obtaining a certificate of occupancy by the end of this calendar year. Although we did encounter some material, progress is still occurring at present with the intent to be complete with any dirt work by the end of this week,” Burgess said.

Councilor Antonio Maggiore later asked Burgess if because “the more they dig the more they find”, how could NNSA respond to NMED if they don’t know the size of the cleanup area.

“How do we know the size of the cleanup area doesn’t go under the proposed housing?  I have some questions about that. Do they know how big the area is, because it doesn’t seem to me that they actively know because they keep digging,” he said.

Burgess responded that the locations for digging have been dictated by the County and that they’re very specific due to the infrastructure needs.

“Things have to be in a certain place for gravity to make them function, so even the last two discoveries have been in the exact same location, the same hole, just different dates, as they dug a little bit farther they excavated more of the same contaminated material,” he said.

Burgess said NNSA has located material in three locations and that it appears that there have been two different types of materials that they have encountered, because “the first two excavations that uncovered material, were similar materials and very close to one another”.

“That being said, the history of the site indicates that this area where we’re excavating was never cleaned up, however adjacent to it there was a significant cleanup through 2010, 2011 to roughly 2016 or so. And they know exactly where they quit cleaning up. In fact the area where we discovered this material, during that cleanup effort, was sampled instead of having the dirt removed due to the historical uses,” he said. “So they do have some historical records showing what was used for what, however, it’s been inaccurate in this very location in that they chose to sample as opposed to fully excavate.”

Burgess said he could draw a boundary of what NNSA had excavated around the area of concern.

“It is somewhat limited by other known factors. But it was within Parcel A-16-in which cleanup was located and it appears that the areas they did not excavate are the areas where we’re finding this material. So I do think it’s somewhat more bound than the public may understand due to that history, but it’s in an area that was considered for cleanup but they used the sampling technique instead of scraping and taking everything away,” Burgess said.

“They’re going to do a trench exploration in alignment with the sewer line that we need to install. By doing this confirmation trench and sampling we’ll know for sure the extent of the waste limit and so far we’ve dug on the Bethel site to install some manholes and stub outs for the sewer line and there was no contamination in those areas,” Shelton said. “But just out of an abundance of caution they’re going to excavate the line of the trench, which is a north-south alignment just immediately east of the A-16-a boundary, and so that work is supposed to begin in the middle of July in advance of Bethel’s planned work in August putting in that sewer line. They’re doing some proactive steps to make sure the site’s clean.”

Councilor Maggiore noted that it is “refreshing to hear that DOE is being proactive in reaching out to community participants”.