Fencing along the boundary of a Los Alamos County property on DP Road has black plastic attached obscuring the view from the street. Photo by Maire O’Neill/losalamosreporter.com 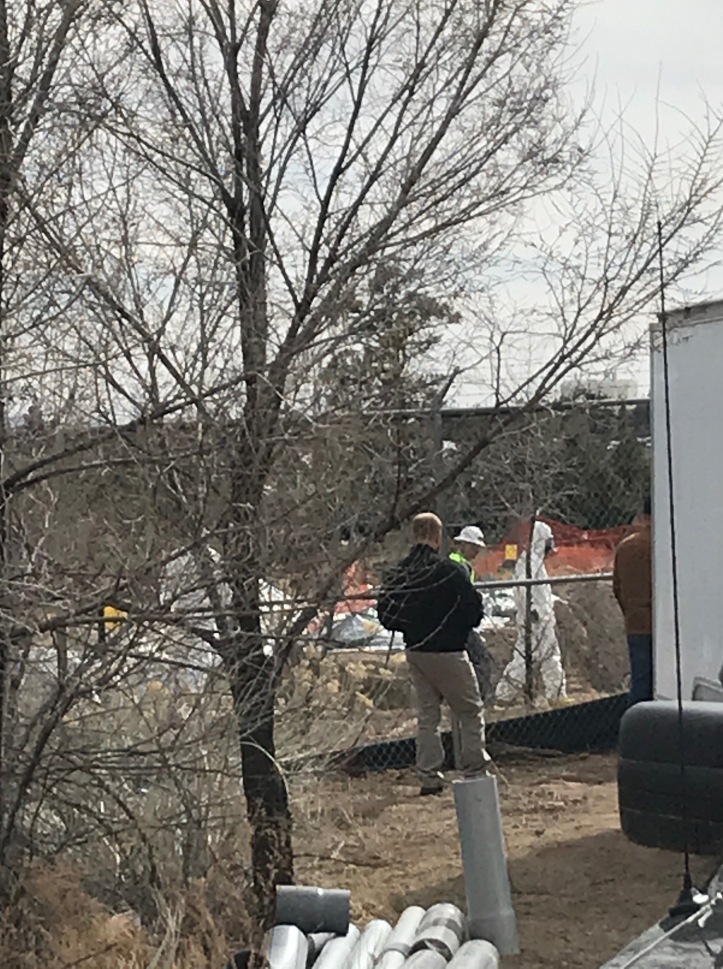 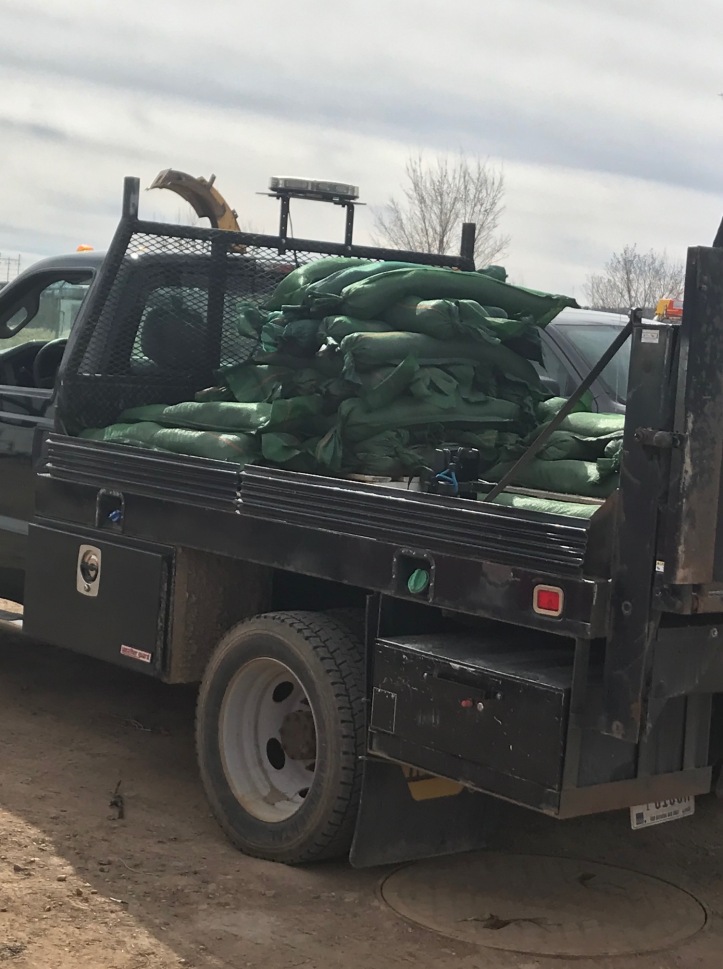 UPDATED Feb. 29: A truck loaded with what appeared to be soil sample bags is parked among several government vehicles at the DP Road property Friday afternoon. NNSA has advised that they are actually sandbags that are being used to hold down Visqueen and tarps at the site. Photo by Maire O’Neill/losalamosreporter.com

A week after Parker Construction excavated six items that were later determined to be contaminated by uranium and plutonium on Los Alamos County land on DP Road, Triad laborers were spotted working at the location which now has restricted access.

Members of the Northern New Mexico Citizens Advisory Board meeting at Ohkay Owingeh Wednesday afternoon were told by Los Alamos Environmental Management Field Office Manager Doug Hintze that a contractor working on County utilities on DP Road Friday, Feb. 14 was concerned because there was a crucible with LASL (Los Alamos Scientific Laboratory) on it among the items that were dug up, so he called a stop to the work.

Hintze said the Los Alamos Fire Department went out to the location Saturday, Feb. 15, surveyed the land and released it. He said the following Thursday, Feb. 20, the Department of Energy’s Radiological Assistance Program team was called out thee to survey and found some sheet metal pieces, a crucible, and a wood piece that had radioactive contamination.  On Friday, Feb. 21, Hintze said EM-LA tasked legacy cleanup contractor N3B to pick up the radioactive items, place them in containers and secure them at TA-21 until they can be disposed of.

“Right now, of course, there was soil that was disturbed out there and some of that soil was believed to be contaminated. We’re now working with the County because this is County land and so it’s not a matter of DOE going out there and doing whatever. So that’s the next step – to work with the County,” Hintze said. “We as part of the partners on the site, picked up those materials to get them out of the environment. The lead for this will be the (National Nuclear Security Administration) side who will start the discussions on what needs to be done.”

County Manager Harry Burgess told the Los Alamos Reporter Thursday afternoon what he knew or had heard, some of which he said was second or third hand to him. He said Brad Parker owner of Brad Parker Construction had come across the material Feb. 14 and given his experience, he knew enough to call the Los Alamos National Laboratory. Burgess said LANL did not respond to the call Feb. 14 or a subsequent call Feb. 15, because the land involved was County land. He said the first he heard of the issue was Saturday and that the County sent out police and fire personnel.

“LAFD has a hazmat team and radiological detectors and they swept the area with the equipment they had, determined there wasn’t a hazard and cleared the site. They released the site and Parker went back to work,” Burgess said.

He said on Thursday, Feb. 20, the Department of Public Utilities got involved, almost a week later. He said Parker was still expressing concerns, that he was digging and found some other things. DPU reached out to the Lab and they sent out their RAP team, Burgess said.

Burgess said he was initially notified of the situation by LANL Emergency Operations Center personnel who were looking for information.

“They weren’t ‘notifying me’ necessarily. They were looking to find out some history of the site,” he said.  He said he asked a few questions and was told that LAFD had cleared the site so that was the end of it in his mind until Feb. 20 when he got a call from the EOC.

“They had done the assessment. They had found some radioactive materials. They wanted to prevent entry into the site to protect it and asked for my concurrence to do that. They wanted to talk about how that would work. They sent a security person to the site but I told them that person was not to engage any member of the public, that he was to call LAPD if there was somebody on our property, and LAPD would take care of it,” Burgess said.

He said the parcel of land was transferred by the NNSA to the County in the last five years and that on the deed, they are liable for any hazardous or radioactive materials that may be there now or in the future.

Asked how the situation would affect the DP Road housing projects, Burgess said the parcel in question was not for housing specifically but that adjacent sites designated for housing.

“Right now, I’m not clear because we are doing assessment of the situation. We are meeting with NNSA on Tuesday, Mar. 3 to discuss our path forward. I have no idea of the cleanup protocols they would recommend. The sewer line that was being excavated is to service the development across the street so we’re pushing to continue if at all possible to put that in but we don’t know today what effect this is going to have,” Burgess said.

In response to a request for information, an NNSA spokesperson confirmed Thursday afternoon that at the request of Los Alamos County, NNSA’s Radiological Assistance Program Team responded Feb. 20 to County-owned tract of land on DP Road to evaluate legacy materials that were unearthed Friday, Feb. 14.

“Analysis of samples near the dig indicate uranium- and plutonium-contaminated materials at levels that do not pose a public health risk. Entry to the area is restricted and signs are posted designating the site as radiologically controlled. Since coming onto the scene to provide assistance, we have worked with the County to control access to the area and are continuing our assessment,” the NNSA statement says. “There is no public health risk related to this event. Plastic tarps cover the areas to stabilize the soil and materials while analysis continues. As an additional precautionary measure, we have re-activated a nearby air monitor and will install additional monitoring equipment.”

The County parcel is located next to TA-21 which formerly housed housed plutonium processing facilities and was where groundbreaking tritium research for energy, environment and weapons defense took place.