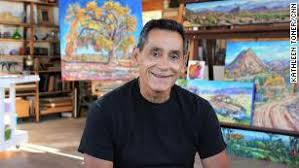 The City of Santa has also declared through a formal proclamation Nov. 1 as its own “Roger Montoya Art as Medicine Day”. Rio Arriba County previously declared Sept. 24 as “Roger Montoya CNN Heroes Day.”

“These proclamations and this appointment further affirm our community is at the core of our mission and the no one creates alone,” Montoya said.

Drawing upon his memories of his grandmother’s healing wisdom and ancestral remedies to nourish the community, Montoya drives home the point that these proclamations are from the heart of matriarchal healing. By bringing home his training and his using the community’s, historical wisdom, much like his grandmother’s, “we’re able to transcend the residue of trauma.”

“By transmuting the practice of art to activate healing not only in body, but in community, and beyond––when you nourish the community through art, you heal historical, cross-generational trauma, Montoya said.

Montoya has worked tirelessly to preserve the region’s cultural heritage through community advocacy, youth empowerment, combating poverty, food inequity, substance abuse, environmental concerns, homelessness, and the stigma of HIV/AIDS through “Art as Medicine.” Montoya is the co-founder of the Arts in the Schools Program, Moving Arts Española, La Tierra Montessori School for the Arts and Sciences, and is a founding team member of the Early College High School Dual Credit initiative.

Montoya, one in 24 CNN Heroes in the world, but is not one of the Top 10 Heroes yet! CNN will announce the top 10 finalists Wednesday, Oct. 30.  The final 2019 CNN Hero of the Year will be decided through on-line voting beginning early in November, with the winner to be announced Dec. 8 during a live TV event in New York.