BOM: The Next Generation Of High-Performance Explosives Developed By LANL And Army Research Lab 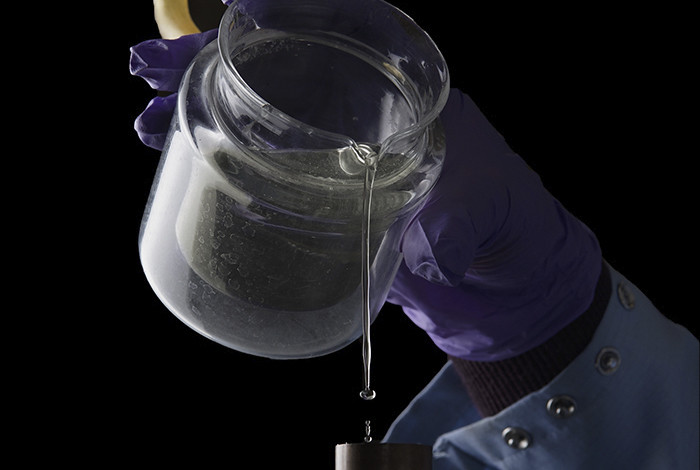 BOM is a new, powerful explosive developed by Los Alamos National Laboratory and the Army Research Laboratory. It is also a melt-castable explosive because it can be heated at low temperatures (84° C), turned into a liquid, and cast into explosive charges. Photo Courtesy LANL

For more than 100 years, trinitrotoluene (TNT) has been the go-to explosive for military, construction, demolition and mining uses. But during TNT’s long reign, concerns have arisen over its toxicity, safety and performance. The U.S. Environmental Protection Agency (EPA) has declared the removal of TNT a priority.

Researchers at Los Alamos National Laboraory and the Army Research Laboratory have met the challenge of developing a next-generation replacement for TNT. They created bis(1,2,4-oxadiazole)bis(methylene) dinitrate, or BOM, a higher-performing, safer and less-toxic replacement for TNT.

“BOM is 50 percent more energetic than TNT, so it is well-qualified to replace TNT as a high-energy-density explosive,” said David Chavez, project leader in the High Explosive Science and Technology group. “BOM is considered a greener and safer explosive because it’s less toxic to people and the environment than TNT.”

Watch a video on BOM, describing its structure, performance, and characteristics that make it a next-generation explosive. (This video is the second in a series of eight videos showcasing 2019 R&D 100 Award technologies. See more LANL science videos here.)

The chemical structure of a molecule determines the molecule’s behavior. In some ways, the structures of BOM and TNT are similar. They are made out of the same elements (carbon, oxygen, hydrogen and nitrogen), and those elements are bonded in a way that provides explosive energy.

However, there are also critical differences in the chemical composition and structure of the two molecules. BOM has far more oxygen and nitrogen, making it far more explosive than TNT. This results in two effects.

First, the abundant presence of oxygen within the BOM molecule aides in the combustion of the “fuel” elements of the molecule, carbon and hydrogen. BOM has enough oxygen to burn all of its fuel elements. TNT is not as explosive because it has a higher proportion of fuel elements and lacks enough combustion elements (oxygen) to burn all of its fuel efficiently. It is this ratio of fuel elements to combustion elements (or the oxygen balance) that makes BOM 50 percent more explosive than TNT. BOM is able to extract more energy out of each molecule than TNT because of this better ratio.

Second, BOM has more higher-density atoms (nitrogen and oxygen) and fewer lower-density atoms (carbon and hydrogen), enabling the overall crystal density of the material to be much higher than in TNT. This is very important because the explosive performance of a material is directly proportional to its density. Together, these differences in composition and structure serve to enhance BOM’s properties as a high-energy-density material.

BOM is also a melt-castable explosive. By definition, melt-castable means that the solid material can be melted into a liquid and then cooled to a solid in a mold. This is useful for simplifying casting operations, such as in loading explosives into munitions like mortar and artillery shells. Steam heat is enough to melt-cast BOM, which keeps manufacturing costs low. If desired, solids can be added to BOM to alter its performance.

BOM achieves the EPA goal of removing TNT and the toxicity that TNT introduces to humans and the environment. BOM accomplishes this through synthesis (how it is manufactured) and structure (how it behaves).

To manufacture TNT, toluene is combined with nitric and sulfuric acids in a handful of steps. This synthesis process is toxic for the workers who could inhale the constituents and the end product, TNT. The production method produces toxic “red water” and “pink water” that run off into the water supply and soil.

BOM is manufactured in four simple steps without caustic chemicals, acids or high temperatures. The synthesis does not produce toxic waste like TNT does. In particular, BOM is free from nitrated aromatic byproducts, which are highly toxic and the main reason the EPA wants to remove TNT. Overall, BOM is a “greener” option—it is better for people and the environment than TNT.

Even after BOM is synthesized, it continues to be less toxic during processing. When solid BOM is melted into a liquid for processing, it possesses lower vapor pressure than TNT and other common explosives. This lower vapor pressure is a byproduct of the molecule’s structure and makes it less of an inhalation and health risk to users. The reduced vapor pressure decreases the hazards associated with occupational health exposure and hazards associated with inhalation toxicity.

In summary, BOM is a viable candidate to replace toxic TNT, is less toxic to produce, less toxic to use and higher performing in explosivity. Fifty percent more energetic than TNT, BOM significantly exceeds the industry benchmark while maintaining user safety. With these characteristics, BOM has the potential to replace TNT not only in military applications but also in in demolition, mining, underwater blasting, construction and hydraulic fracturing.