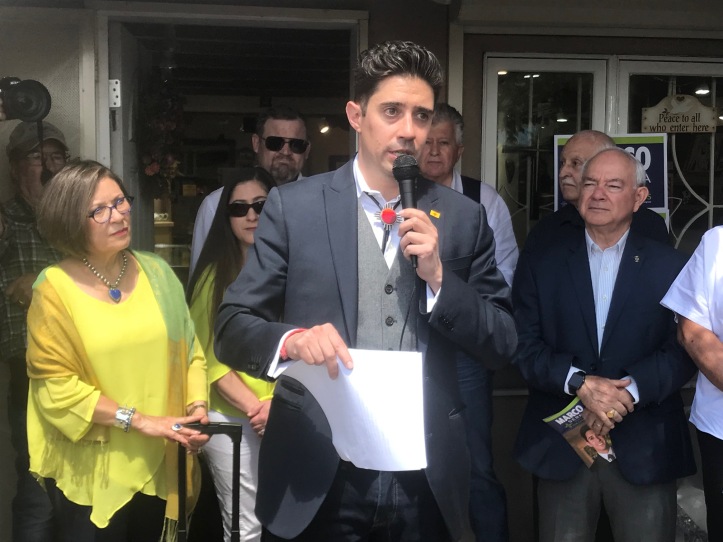 Barbara Serna watches as her son Marco Serna formally announces his run for the 3rd Congressional District seat Thursday at her jewelry store in Espanola. Photo by Maire O’Neill/losalamosreporter.com

Flanked by his parents, relatives and supporters from the Espanola community and beyond, First Judicial District Attorney Marco Serna formally announced his bid for the 3rd Congressional District seat. Current Rep. Ben Ray Luján is running for U.S. Senate in 2020.

Serna explained why he chose the location for the event – his mother Barbara Serna’s jewelry store, Alicia’s Fine Jewelry, on Paseo de Onate.

“What makes this location so special is what it represents to me and why I am running for Congress. First, my parents and sister are here, along with family, friends and supporters,” he said, adding that the store was where he had learned from his childhoold the importance of hard work, small business and the community.

Serna also spoke about the opioid epidemic and its effects on the Espanola community. He said as District Attorney he had made it his number one priority make sure that diversion programs were paramount in prosecuting nonviolent drig offenders. He said the program has been so successful in Rio Arriba County that he gets goosebumps thinking about it.

“I know everyone here knows some that suffers from addiction has suffered from addiction or has passed away because of their addiction. That is unacceptable in my opinion. We need more funding we need more services and I will take that fight as your next congressman to DC to protect our community,” Serna said.

Serno graduated from St. Michael’s High School in Santa Fe and received a Bachelors Degree in Criminal Justice and Public Administration from the University of Arizona in 2005. He earned his Juris Doctor Degree from St. Mary’s University School of Law in 2008.

He worked as an assistant state attorney general prosecuting Medicaid fraud and elder abuse cases and later served as an assistant district attorney in Valencia and Sandoval Counties where he prosecuted domestic violence and DWI misdemeanor offenses. He was elected First Judicial District Attorney in 2016.

Serna joins a long list of Democrats who have filed as candidates for the congressional seat including former CIA operative Valerie Plame, attorney Teresa Leger,  Rep. Joseph Sanchez of Alcalde and Gavin Kaiser of Santa Cruz.