Izraelevitz Discusses His Approach To His Councilor Responsibilities 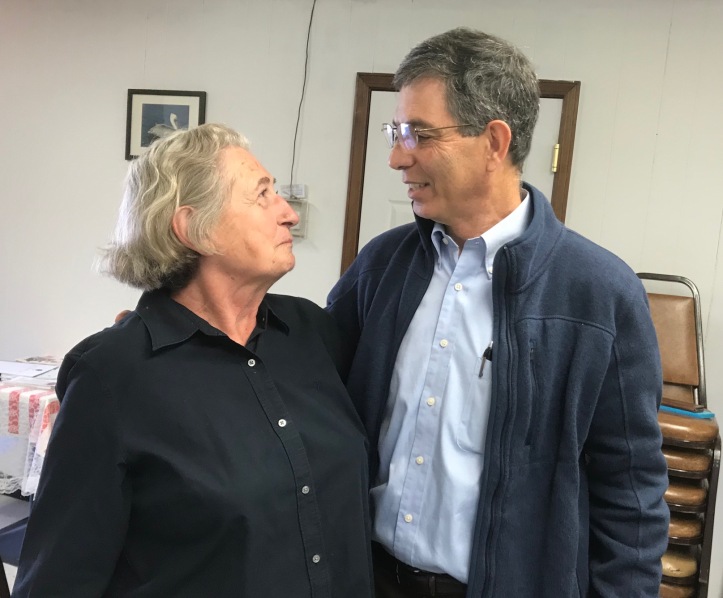 Los Alamos County Council Chair David Izraelevitz who is seeking reelection to his Council seat said Monday night at the Veterans of Foreign Wars candidates’ forum that he was very blessed to raise his wonderful children in the community and that it is one of the many reasons why he serves on the Council.

Izraelevitz, who has served as councilor for seven years, is the only incumbent running for reelection. He said he has seen a lot of dramatic changes during his time in office including the new Smith’s Marketplace and at Ashley Pond.

“The thing I am most proud of is that finally after 40 years of talking about it we have a well-managed, well-supported Teen Center in Los Alamos County which is something we have needed for a long time,” he said. “Basically, I am running on my record. I hope that if you look at what has happened in the last seven, eight, nine years you will see the positive differences that the community has gone through.”

Izraelevitz cited what he sees as the three major responsibilities of being on council. He said the first one is advocacy for the citizens.

“We talked about providing basic services, safety, keeping the roads in good repair, looking over the facilities and so forth and I feel that that’s a fundamental responsibility that every councilor has. But a secondary important responsibility is communications,” he said. “Communication is actually more involved than just being out there and going to the Farmers’ Market and writing a letter every once in a while in the newspaper. It’s having a conversation with the citizens to explain also what are some of the legal and financial restraints that Los Alamos County is under. There are some things that we can do and we should do but it’s also important for the community to understand that we have some legal constraints and financial constraints.

He said for example the Council can’t subsidize County utilities and is limited in the things it can do.

“Like Kroeger – we can’t go in there and tell them we want Smith’s to become a bowling alley. We have to follow the processes and so forth. So it is a communication to explain what it is as a legal entity that we can do,” Izraelevitz said.

He said, finally, a very important and difficult role for a county councilor is strategic planning.

“Unfortunately that’s something that we have to look at 10, 15, 20 years ahead of time and councilors will not be here 10-20 years from now. So, in a sense that responsibility is diffuse and it’s easy for councilors to talk about the short-term and lose track of the long-term. I see that as a very important responsibility because most citizens are thinking about their own daily lives, raising their children or their jobs and it is the job of the County Council to think about those things,” he said.

As some of the long-term issues facing the Council, Izraelevitz said the Laboratory is, has been and will be the financial engine for the County.

“There’s no question whether we talk about tourism or economic diversification, it’s the Laboratory that’s going to keep Los Alamos running. How you keep Los Alamos going is you need to make it an asset rather than a liability to recruiting. The Laboratory is hiring a thousand people a year. We need to provide housing, schools, amenities, but we also need to provide careers for those trailing spouse because generally they may not move to Los Alamos if the whole family cannot find some rewarding lifestyle,” he said in conclusion.

At last week’s American Legion candidates’ forum, Izraelevitz talked about those three responsibilities and how he approaches them saying he is very fact-based. He said he talks a lot with County staff and County Manager Harry Burgess because he wants to know the “facts on the ground”.

Izraelevitz said he believes in progress.

“Fundamentally if we don’t have excellent schools in Los Alamos, Los Alamos will wither and die because the key hires at the Laboratory, those who are going to design the next great thing, they are well-educated and they expect their families to have an equal if not better education than they did,” he said.

Izraelevitz said the County Council has worked very hard with “this big cloud that’s hanging over us which is the taxability of the Laboratory”.

“We will try everything that we can and we will see what happens to try and impress on Triad and on the Department of Energy NNSA the importance of these tax receipts. All of those things that we have been so proud of over the last 10 years, those just will not happen if we do not have those taxes because essentially half our tax income will go away if Laboratory goes to non-taxable. The math is there with our tax base if you look at our numbers,” he said.