The launch was the first in a series of tests, all with the aim of developing methods and technology that will strengthen national security and help train the next generation of technical staff at LANL. This first test brought together several groups from LANL, including members of global security, weapons, and science and technology. 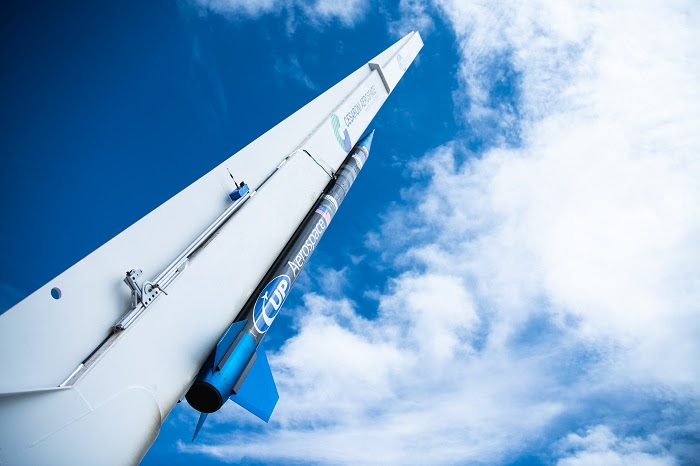 UP Aerospace SpaceLoft Rocket on its rail at Spaceport America

The test was a resounding success. The instrumented payload on the rocket relayed flight data to an orbiting DOD satellite, also developed by the LANL, and provided valuable information throughout the entire flight.

Congress passed the Stockpile Responsiveness Program in 2016, with an objective for the national labs to “transfer knowledge, skills, and direct experience to newer generations of designers and engineers,” through developing “technologies and flight testing” for the nation’s deterrent. Normally, these tests are made over the Pacific Ocean. And to test a new piece of technology on a rocket takes years of planning with the DOD and can cost more than $100 million. But by partnering with private companies, the Lab can conduct these tests much more frequently and at a fraction of the cost within the State of New Mexico. The flight at New Mexico’s Spaceport America, on August 11, cost only $1 million and occurred only 15 months after the initial concept. 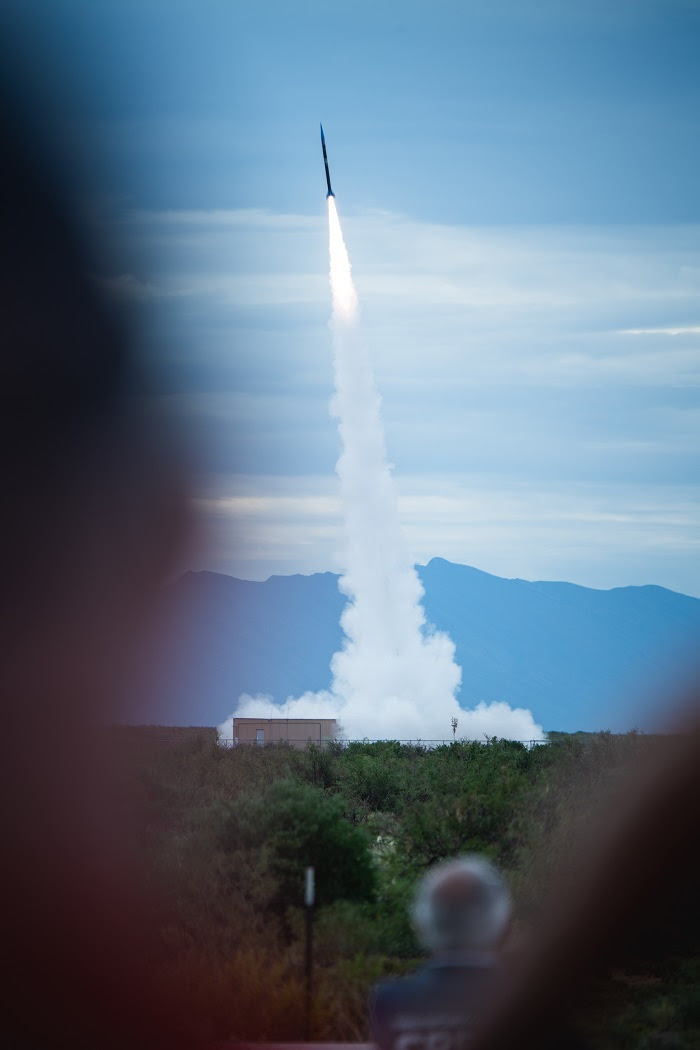 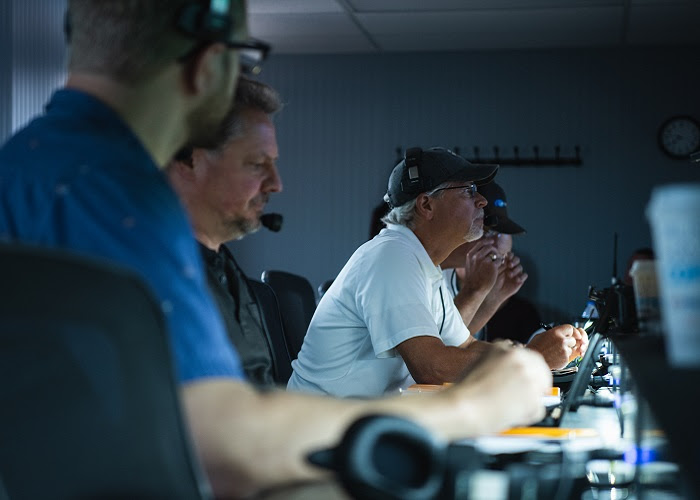 UP Aerospace, based in Colorado, handled all of the details for the launch — everything from flight logistics, rocket allocation and assembly, down to launching the rocket. This first test used a SpaceLoft rocket developed by UP Aerospace, an 800-pound vehicle that can pull 15 Gs and fly more than 60 miles into the atmosphere, reaching Mach 6 in 12 seconds. It then reenters the atmosphere and crashes safely into White Sands Missile Range, where it is recovered. UP Aerospace has been in operation since 2004, and has overseen launches for a variety of governmental agencies, including NASA.

“UP Aerospace is very pleased and honored to provide launch services to Los Alamos National Laboratory, and aid in the success of the ReDX re-entry flight vehicle mission,” said Jerry Larson, the president of UP Aerospace. “We are very proud that as a small company we executed this complicated mission in less than 11 months from contract start. This mission demonstrated that a small company like UP Aerospace is capable of meeting complex stringent requirements in a very short period of time, at low cost, enabling new technologies to be developed in a very rapid cadence.”

“This new partnership between our long-term customer UP Aerospace and LANL is exactly the kind of synergy we all hope will continue to happen due to Spaceport America’s presence,” said Scott McLaughlin, Executive Director of the New Mexico Spaceport Authority. “Since 2006, UP has launched 14 rockets from the spaceport, with this being their 12th to space. Congratulations to both LANL and UP for this unique and very successful mission.” 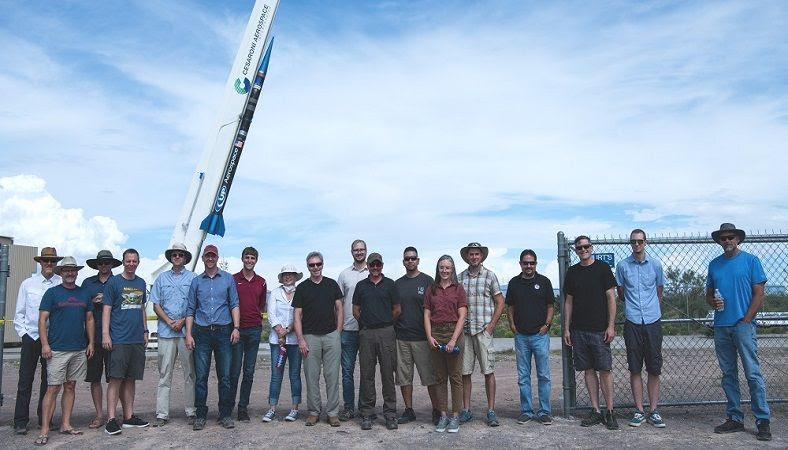 August’s launch, the 15th for UP Aerospace at Spaceport America, was the first in a series of tests, all with the aim of developing methods and technology that will strengthen our national security and help train the next generation of technical staff at LANL. This first test brought together several groups at the Lab, including members of global security, weapons, and science and technology.

For the past year, a team of engineers designed and built a payload specifically for UP Aerospace’s rocket that would relay flight diagnostics — temperature, acceleration, and rotation — to a Lab-developed cubesat in low Earth orbit. There was only a four-minute launch window to allow communication with the satellite, which would then store the data and relay it on a later orbital pass to a ground-monitoring station Lab employees set up on a small table near mission control.

“We nailed the launch down to the second,” said Justin McGlown, an R&D engineer with ISR-5, who worked on the mission from its inception. “Even though this test seemed simple, we had to make certain the rocket’s trajectory lined up with the position of the satellite as it crossed the horizon, and that both could communicate with our ground station for this very short window. But within a minute of launch, we were receiving data. It all came together just as planned.”

Over the next five years, the Lab plans to conduct ten similar tests, each progressing in technical complexity. The goal is to use these cheaper launches to quickly develop new technologies until they are ready for full-scale tests in rockets that more closely simulate real-world conditions. Ultimately, this new partnership will speed the Lab’s progress in maintaining the nation’s stockpile and save money.

“SRP is allowing our new staff to learn and develop the experience they will need to meet the Lab’s national security mission requirements,” said Matthew Tucker, a program manager with the Lab’s Office of National Security and International Studies. “We need to significantly decrease the amount of time it takes to go from concept to prototype in order to be prepared to respond to emergent threats. And one thing we identified was that flight experiments for us are really expensive and time consuming compared with other countries. The lab was an early adopter of commercial orbital launch for the satellite program, and we are excited to now be developing a commercial suborbital launch capability for the weapons program. Spaceport America and UP Aerospace have been wonderful to work with and provide numerous advantages compared to organizing a test over the Pacific Ocean. This test showed how powerful the partnerships and capabilities are right here in New Mexico, and we look forward to many future flights.”

###Spaceport America (https://www.spaceportamerica.com) is the first purpose-built commercial spaceport in the world. The FAA-licensed launch complex, situated on 18,000 acres adjacent to the U.S. Army White Sands Missile Range in southern New Mexico, has a rocket friendly environment of 6,000 square miles of restricted airspace, low population density, a 12,000-foot by 200-foot runway, vertical launch complexes, and about 340 days of sunshine and low humidity.

Some of the most respected companies in the commercial space industry are tenants at Spaceport America: Virgin Galactic, HAPSMobile/ AeroVironment, UP Aerospace, and SpinLaunch.