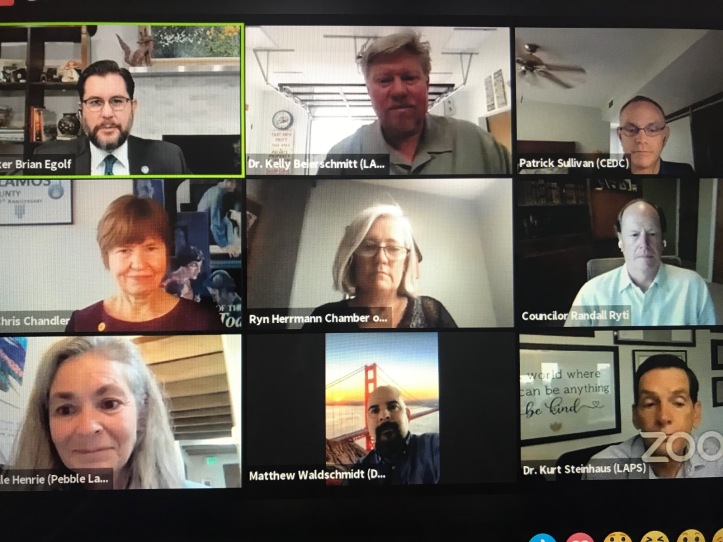 House Speaker Brian Egolf and Rep. Christine Chandler recently hosted an economic recovery virtual listening event during which they discussed with local representatives what the legislature could do to improve the business climate in communities throughout New Mexico and help innovative businesses thrive and grow.

Egolf said Chandler has hit the ground running and is doing a fantastic job in the state House of Representatives.

“She has taken on some big, big pieces of legislation and has definitely established herself as a leading authority on many issues in the house. The people of Los Alamos are very lucky to have her representing them,” Egolf said during the call. “She is dogged in her defense of your community. So anytime she smells a whiff of something that’s not going to be good for Los Alamos fire and brimstone come raining down on my head and I have to tell her that everything’s just fine.”

Chandler said interactions with business owners are very important to legislators as they attempt to craft legislation that supports business and particularly business in the COVID environment.

“We’re going to have a lot on our plate next session and hearing from this group and others across the state is going to help us make informed, helpful, intelligent decisions for the business community,” she said.

Asked about the current business climate and how local businesses are adapting to online retail and remote sales, Sullivan said Los Alamos is a little bit different to other communities with the Laboratory here.

“If you take a look at just the numbers of our gross receipts tax revenues, because of the Lab, you will not see a significant decrease in the County’s revenues of GRT but that does not show the real story of how our business community has been affected here. There’s been a significant impact on our business community both in terms of the restrictions on occupancy limits and who can be open and how they can be open,” Sullivan said. “And the fact that the Laboratory wisely has sent most of their staff into a work from home status – removed perhaps two-thirds of the Lab’s population that are typically here during the day. So our restaurants and our retail sector, are very much struggling right now, just like they are all over the country.”

Sullivan said the community has lost a handful of businesses on a permanent basis. He said some fhem were 100 percent COVID-related and for some of them COVID was sort of the last breaking point in their ability to stay open.

“The ones that are still open have done an incredible job, much as the schools had to do, in adapting quickly. Our businesses have too, in terms of altering their business model, altering the way they interact with their customer base, being innovative, putting things online, offering home delivery and curbside pick-up. We’ve had businesses do live-stream Facebook events to show the merchandise in their store to get people in. They’ve done an incredible job and the best job they can,” he said.

Sullivan said one of the things that he believes is very much worth exploring is legislation that would perhaps allow the governor to make some changes to the anti-donation clause in a time of crisis.

“If you have a natural disaster of flood or fire, if you have severe business continuity disruption like a pandemic, the rules for anti-donation may be relaxed or changed. Perhaps that’s a declaration by the governor or some other body that allows the municipalities in that area to work more closely with their businesses,” he said.

He suggested something like a PPP program at the federal level that is a permanent and can be rapidly deployed anywhere in the country to very quickly get cash in the hands of businesses in the form of a grant.

“The anti-donation clause here has made it difficult for many municipalities that perhaps had the ability to help businesses in some capacity and it’s hindered their ability to do that. It could be as easy as lending our 10 by 10 tents for outdoor dining and there being a concern that that violates anti-donation. That could be very beneficial to explore moving forward- is there a legislative ability to have changes made to that statute in a time of crisis – that would be the number one thing that could happen legislatively to help communities recover,” Sullivan said.

Egolf said that’s a really creative and very good idea. He said it would be especially good if there was a way to do it without having to amend the constitution because there are constitutional amendments to the anti-donation clause and the legislature could see if we could fit that within one.

“I’ve had a lot of folks say to me that there are still funds available through the PPP and other programs but these business owners are just saying it’s just not possible for them to do this at this time. They’re not sure in many cases if they’ll be open in a year to make these payments. It’s gut-wrenching to hear these stories over and over again every day,” she said.

Hermann said a huge challenge for a lot of businesses and workers right now is childcare.

“I think if there’s anything that can be done to help with that right now it would help just about everybody. One of my businesses had three different classes going on right there in her wine room at her restaurant during the lunch time while she was trying to conduct business. We’ve got to try and come up with something to help some of these people when it comes to childcare,” she said.

Councilor Ryti brought up the issue of broadband noting that the schools worked very hard to make sure everyone has access, even setting up individual hot spots.

“If we’re going to be shifting to working home which seems to one of the outcomes of the pandemic, that’s one of the things we will need. We are looking locally at what we can do to have better access to broadband,” he said, adding that the anti-donation issue also comes into play in that local governments can save money for a rainy day but then can’t spend the money if they are lucky enough to have it.

Ryti said the community has seen the effect locally unfortunately of businesses that have had to close. He said the bulk of GRT revenues come from the Lab but that what people think of as the community is local business owners.

“We’ve been actively trying to support that community as much as we can. There are some good reasons why we shouldn’t just be allowed to give money away to whoever we want but on the other hand there should be some ability for public private partnerships,” he said.

Ryti said Local Economic Development Act (LEDA) grants are of a scale and a type that doesn’t fit a lot of businesses but more the larger efforts such as new recruitment of technology companies. He said frankly some of the business owners don’t want to go through the LEDA paperwork.

The ant-donation issue has been discussed by Los Alamos County Council as part of a dialog on how to help struggling small businesses during the pandemic. County Attorny Alvin Leaphart said there have been a lot of problems with the Anti-Donation Clause and that the legislature is not simply able to change it, that it would have to be an amendment to the constitution and approved by the voters in a general election.

Leaphart told Council the courts in New Mexico have not provided a lot of case law and that it would be beneficial if the courts would weigh in also and make some rulings on some facts that are applicable to situations like the pandemic.

Sullivan has told Council that what would work would be something like a revolving loan fund that would not necessarily violate the clause, with very low interest and deferred payments. He said the issue is where does the money come from and that he hears time after time that communities are going to add a line item in their budgets each year to fund a revolving loan or a master grant fund. The amount that would be put in would be a city by city decision and it would be a reserve fund for situations like the pandemic.

“Money can be deployed very quickly and it’s either in terms of a grant or low interest loan. It is not put through the same types of constraints as getting federal money or state money. It’s much faster deployed and much quicker used by the businesses. So that’s the type of thing I think is worth thinking about. Do we as a community have the financial bandwidth to consider something like that? If we do, is it actually the best use of our funds? The number one thing we heard was I’d rather have the cash in hand,” Sullivan said.