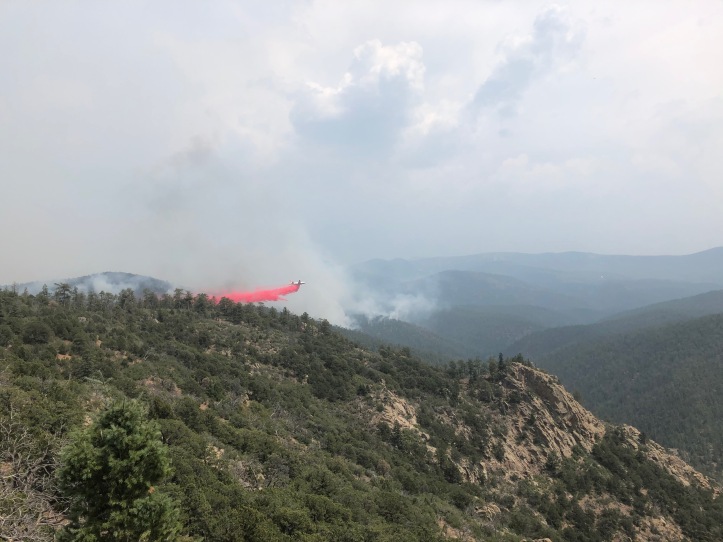 The Medio Fire has burned some 2,432 acres as of Monday morning and is 5 percent contained with 187 personnel at the scene.

Fire officials said Monday morning that the public should expect to see an increase in air traffic, smoke, and fire activity today as a result of planned burnout operations.

Firefighters are planning to begin burnout operations along the southern, western, and northern edges of the fire today to moderate fire intensity as the main fire approaches containment lines, officials say. These complex burnouts may require several days to complete.

Santa Fe National Forest Espanola District Ranger Sandy Hurlocker told some 500 participants in the virtual community meeting for the Medio Fire Sunday evening that he is thankful for the good progress made during the last couple of days. He thanked several agencies including Tesuque Pueblo, Nambe Pueblo, the Bureau of Indian Affairs Northern Pueblos Agency, Santa Fe County, the City of Santa Fe, Santa Fe County Fire Department and the National Guard.

Incident Commander Carl Schwope said firefighters appreciate the signs of support from the community posted along the their way home in the evenings. He noted that there are no evacuations currently in place but that a number of residents in the Pacheco Canyon Road area are in ready status. The Structure Protection Group is working with homeowners along the western portion of Forest Road 102 to implement protection measures and mitigate risks to these residences.

Schwope confirmed during the meeting that the team is getting the resources it needs to fight the fire. He said the Medio Fire is not the highest priority fire but that doesn’t mean it has been neglected. Because it’s a federal fire, most of the resources are federal with cooperation from local agencies.

Schwope said the fire is going to take a while to contain. Part of the fire will be herded into the Pacheco Burn Area where it will run its course. The southern part of the fire is expected to be contained in 6-10 days with another four days for mop up.

Incident Meteorologist Royce Fontenot said temperatures Sunday were near 90 degrees with 15 to 17 percent humidity which gives a favorable environment for fire behavior. He noted that slightly cooler temperatures of 83-84 degrees are expected at the base of the fire through Wednesday but things will probably warm up again later in the week. Thunderstorms are expected and while rain would help, thunderstorms soar the fire’s behavior and provide safety concerns because of erratic winds and lightning.

Fontenot said a high pressure area over the Four Corners is bringing in smoke every afternoon from fires in California, Colorado and southern Nevada, so the smoke from the Medio Fire combines with the smoke from the other fires and that is the haze people are seeing in the area.

Buck Wickham, Section Chief of the Southwest Area Incident Management Team said the team is working to herd the fire into the Pacheco Burn area. The fire has made a push towards the Rio Nambe Trail. So far it has avoided the Tesuque Tribal trust lands. The plan is to burn out the Road 102, the Pacheco Canyon Road.

On Sunday afternoon, Wickham said three aircraft brought loads of fire retardant which were dropped along the western flank of the fire. He noted that fire retardant is only a holding feature that slows down a fire and that the fire can eat through it. He said the three planes came from Durango, Colo. and Mesa, Ariz. and that there is a lot of competition for retardant drops but he hopes to have more. Fire retardant moderates the fire intensity and allow time for crews to complete critical burnouts. Burnout operations along the eastern edge have been successful in removing fuels and reducing risk to tribal trust lands and the Santa Fe ski basin area.

Asked about helicopter flying west from the fire, Wickham said they are National Guard helicopters using Nambe Reservoir as a dip site and are carrying some 600 gallons of water per trip to cool off the fire edge on the southeast side.

A virtual map for the Medio Fire is now available at https://arcg.is/08qOyT0 and shows  This interactive map is designed to help the public stay informed on the up-to-date location and spread of the fire and shows an updated perimeter map and the fire line status. It also shows fire-related closures and restrictions on the Santa Fe National Forest.