SuperCam Designed, Built And Tested At LANL Is Ready To Head To Mars With Perseverance Mission 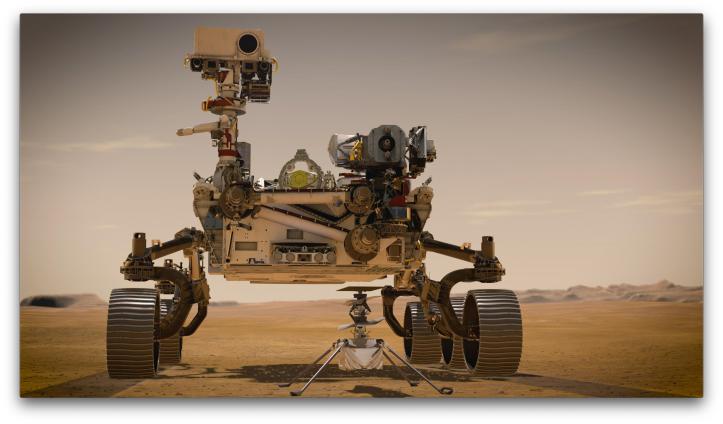 The Mars 2020 Perseverance Rover will seek signs of ancient life and collect rock and soil samples for possible return to Earth during a mission which will last at least one Mars year which is about 687 Earth days. Photo Courtesy LANL 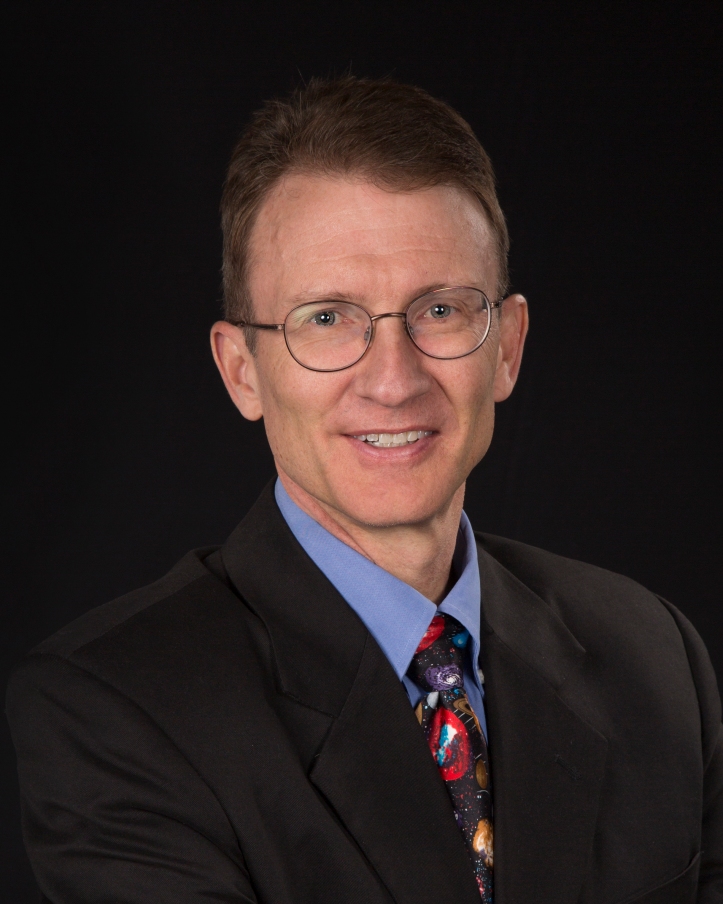 Roger Wiens, a Fellow at Los Alamos National Laboratory, is the principal investigator for the SuperCam project. Photo Courtesy LANL 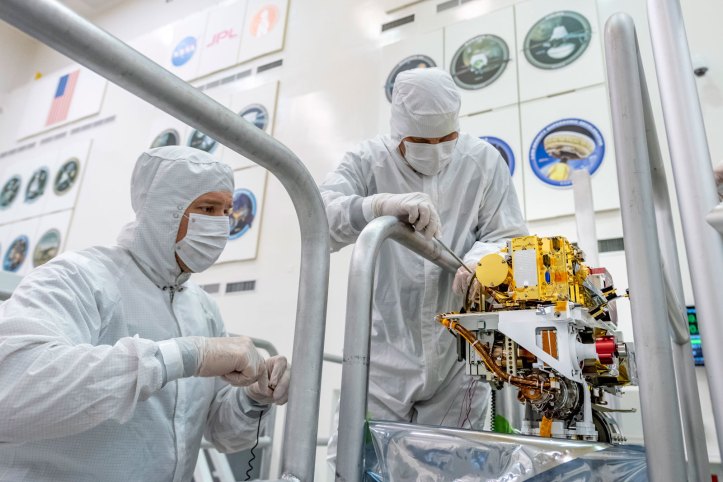 Scientists work on the SuperCam instrument attached to the Mars 2020 Perseverance rover which launches from Cape Canaveral later this month. Photo Courtesy LANL

SuperCam is a follow-on to ChemCam, which is currently working on Mars and has been operated from Los Alamos every other week from since 2012, Wiens said. ChemCam, a suite of remote sensing instruments, went to Mars on the car-sized Curiosity rover that landed there on Aug. 6, 2012 to investigate the Martian climate and geology and assess whether Gale crater has ever had environmental conditions to support microbial life.

“SuperCam is a significant step up from ChemCam. They look a lot alike and SuperCam carries out the same chemical analyses that ChemCam does. SuperCam also takes images like ChemCam but there was a desire by the science community to study not just the chemistry of the rocks and soils within 25 feet of the rover, but to also understand the mineralogy – the mineral makeup of these rocks,” Wiens said. “Those are two very complementary pieces of information and so we heard them, and we added not one, but two mineralogy techniques into the instrument package and we succeeded in making SuperCam almost exactly the same size and weight as the original ChemCam.”

The chemistry technique used by both ChemCam and SuperCam is laser-induced breakdown spectroscopy (LIBS) where the laser zaps the rocks or soil and makes a little plasma. From that little burst of light which is captured by a small telescope on the mast of the rover, spectrometers can determine the elemental composition of the sample as well as physical properties like hardness.

“We are using the laser in SuperCam’s case in two different ways. Beyond the LIBS technique that we’re still using, we now have a way to change the wavelength or the color of the laser. Instead of infrared, we can use a green beam, and in that capacity, we can study the mineralogy with a technique that is called Raman spectroscopy,” Wiens said. “We use this Raman spectroscopy to tell us not just if the rocks have carbon but if they are actually a carbonate mineral, like limestone or dolomite for example, or if they have sulphur – it’s not just that they have sulphur, but whether it’s gypsum – the kind of mineral that makes up White Sands in Southern New Mexico. That tells us a lot more about how the rocks were formed and what the climate was like when the sediments were laid down and when the rocks solidified.”

He said besides the Raman spectroscopy for mineralogy, infrared spectroscopy is used – taking the sunlight that is reflected off the rock and dispersing it into the spectrum of infrared colors.

“It turns out that there are some infrared absorption bands that occur when the light is reflected off the rock if there are carbonate minerals in the rock or if there are clay minerals or other water-bearing minerals,” Wiens said.

Wiens noted that the project’s partners at the French Space Agency wanted to put a microphone on board SuperCam but NASA didn’t initially accept that proposal for it.

“There has to be a really strong scientific justification for everything that goes to Mars, and we had some ideas. There was a student in France who was trying to understand the sound of the laser beam zapping the rock. We had used the zapping sound a little bit to tune the focus of our telescope that projects the laser beam. It turns out the sound can tell you if that laser beam is well in focus or not. It’s much louder when it’s in focus and has a nicer zapping sound. It also turns out that if you have a hard rock, and you shoot it a bunch of times, it’s going to sound about the same every time you shoot it, but if you have a soft rock, the laser beam starts to burrow in and the sound starts to change as you create a cavity or pit from the laser beam,” he said.

This means that scientists can tell without ever driving up to a rock whether it’s hard or soft by shooting the laser at it and listening to the change in sound.

“Then we went back to NASA and said, ‘Hey, we really think this is useful!’ So they accepted the idea that we would add the microphone and we did. So we will get to listen to whatever one hears on Mars, which will probably mostly be the wind and perhaps dust devils, the sounds of the rover, and that of the laser plasmas. We’ll find out–maybe there are other things we can listen to,” Wiens said.

LANL also has a fairly significant part in one other instrument on the rover, known as SHERLOC – the Scanning Habitable Environments with Raman & Luminescence for Organics & Chemicals instrument – which is mounted on the rover’s robotic arm.

“SHERLOC is a long acronym, but it’s a nice acronym, because you can imagine sleuthing for organic materials on Mars, which is what this instrument is going to do. We’re happy to be part of that instrument as well,” Wiens said.

As with other people this spring, the Mars operations teams had to find a new way to work during the Covid-19 pandemic. “At this point we’re all operating from our houses. In fact, we’re sending up commands to ChemCam from home today (Wednesday, July 22).”

The Los Alamos team trades off every other week with a team in France to operate ChemCam. That same arrangement will be taking place with SuperCam. “We’re partnering with the French Space Agency on SuperCam’s operations too. After the Perseverance rover’s landing in February, we will probably be trading off every other week sending commands to SuperCam as well as ChemCam, so that will keep us busy.” he said.

Wiens said the two rovers operate robotically because the travel time of signals to Mars is too long – up to 20 minutes each way. He said instead of joy-sticking a rover as you would with a drone or some other remotely operated vehicle on earth, it has to be operated robotically.

“We send it commands and let it do its thing with those commands until the next day, or sometimes longer. For example, today we are sending up commands to keep the Curiosity rover busy for five days. On Monday our French partners will give it the next set of commands,” he said. “It’s a challenge, because you can imagine trying to drive a rover by sending it a set of commands and then expecting it to drive all on its own. And the same thing with picking targets on Mars for our laser.”

Wiens said the rover actually has software that will take its own pictures of the surface of Mars, pick its own targets and then shoot them. The team uses that automatic targeting about one fourth of the time.

“That helps if the rover is driven somewhere and we haven’t got pictures back on earth yet to target ChemCam at that new site. The rover does it for us. We can get our ChemCam data faster that way,” he said.

SuperCam, which is often referred to as a “Swiss Army Knife” of instruments, will leave Earth with the Perseverance rover aboard an Atlas V-541 rocket from Space Launch Complex 41 at Cape Canaveral Air Force Station in Florida. The sensor head which is mounted on the rover’s long-necked mast weighs about 12 pounds and the electronics mounted in the rover’s body weigh 10.6 pounds.

Wiens holds a PhD in Physics from the University of Minnesota and is a Fellow at Los Alamos National Laboratory. He holds an honorary doctorate from the University of Toulouse, France and was knighted by the French government for his work in “forging strong ties between the French and American scientific communities” and for “inspiring many young, ambitious earthlings.” He is the author of “Red Rover: Inside the Story of Robotic Space Exploration from Genesis to the Mars Rover Curiosity”.