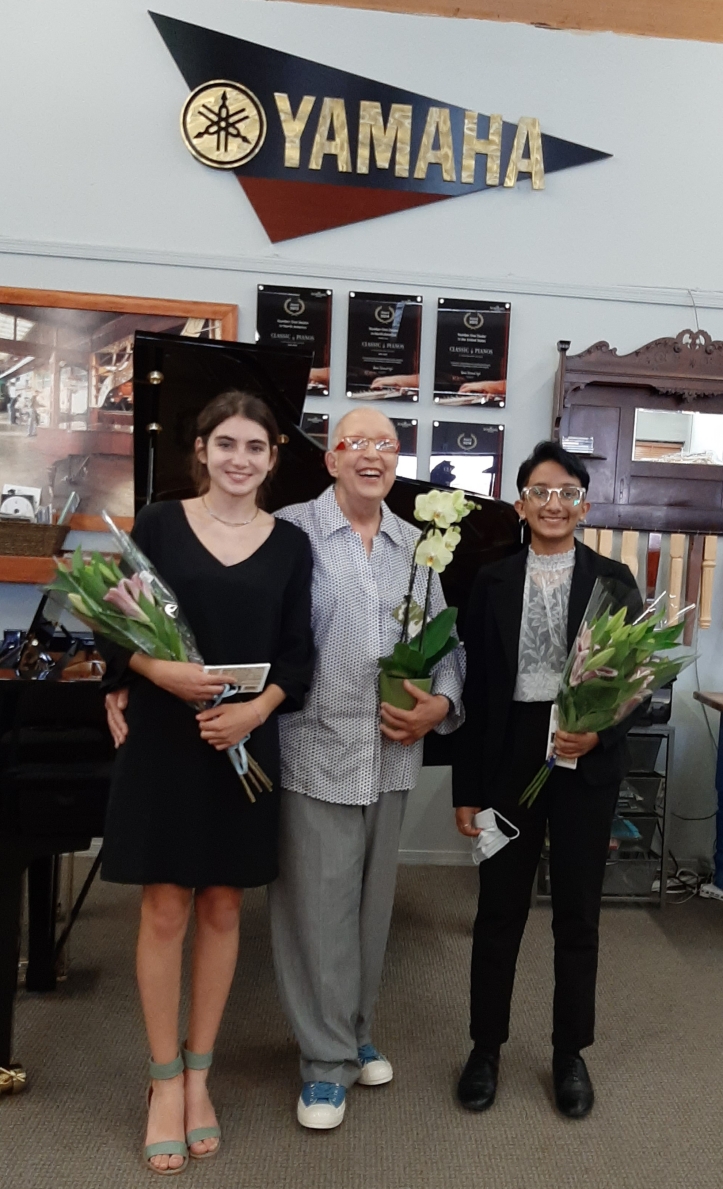 Before heading off to college, 2020 Los Alamos High School graduates Sruthi Garimella and Sonya Svyatskaya achieved yet another significant life goal. The recent grads performed a shared, solo piano recital that was truly a capstone moment to their piano study. Originally scheduled to be a public recital at Fuller Lodge, due to the Covid-19 virus, the concert was subsequently hosted in Albuquerque through the generosity of PianoWerkes. Owner Neal Hickson provided the young artists with the newest model of Yamaha’s concert grand. Although their June 28 performance was necessarily limited to only their families and piano teacher, the recital was recorded on video, available at https://www.youtube.com/watch?v=MkIWA5LSt4I&feature=youtu.be

Garimella and Svyatskaya have both been devoted to classical piano study for more than 10 of their 18 years. Garimella began her earliest study in Albuquerque with Russian-trained distinguished pianist, Tatyana Bayliyeva. Then at age eight, when her family permanently relocated to Los Alamos, she became a student of Dr. Madeline Williamson of Los Alamos Piano Studio. Svyatskaya began her studies with Williamson at the age of eight and her two brothers, Lenny and Natan Svyatsky, are each continuing their piano studies with Dr. Williamson.

The young artists’ teacher stresses that only a minuscule number of piano students ever accomplish a graduating Senior Recital, especially if piano performance is not their intended career. Whereas both pianists are probably headed for careers in scientific areas, both let Williamson know at the beginning of last summer that their goal was to perform this recital. Williamson candidly told them that it would require far more work (practice) and commitment beyond what they could possibly imagine, but Garimella and Svyatskaya persisted to their ultimate achievement. Williamson notes that both their repertoire—and their demonstrated technical and musical expertise—is on par with what one could expect of collegiate piano performance majors. The pianists alternated performing in the recital, determined by historical period of the works, ranging from Baroque to Contemporary eras.

Svyatskaya performed Bach’s Prelude in D minor, BWV 851; the Allegretto movement of Sonata in B flat major, K 570 by Mozart; the virtuosic Chopin Waltz in C# minor, Op. 64, No.2; and her beloved Russian repertoire, Rachmaninoff’s Op. 23, No. 4 Prelude in D major; and two works from Tchaikovsky’s The Seasons, Op. 37-b, The Lark (March) and Autumn (October).

Garimella presented the entirety of Beethoven’s Op. 13 Sonata, the Pathetique; two works, Prelude and Tango from España Suite, Op. 165, by Albeniz; and a set of her favorite French repertoire that included, Ibert’s La menuse de tortues d’or (The Leader of the Golden Tortoises) from his Histoires; the first Gymnopedie of Erik Satie; and concluded the joint recital with three works from Poulenc’s 1932 set of Fifteen Improvisations (No. 1 Presto ritmico; No. 12 Hommage a Schubert; and No. 15, Hommage a Edith Piaf).

Williamson’s goal for all of her students is to help them develop to their fullest potential in piano. Both Garimella and Svyatskaya have personified the best in outstanding young pianists not only through their solo recital, but as active participants in all of New Mexico’s piano competitions. Both have been First or Second Prize Winners multiple times in the State Honors Competition, the Santa Fe Sonata Contest, and the esteemed Dennis Alexander Piano Competition. Additionally, in 2018, Garimella was awarded the Mary Israel Outstanding Artistry Award at the Dennis Alexander competition. Williamson hopes that her studio motto of Music Lasts a Lifetime is one that will be exemplified through her students, also stressing that such a high level of pianism can never be accomplished without active parental involvement, support, and commitment. The young artists’ parents are Rao & Madhavi Garimella and Natalya Sherman & Daniil Svyatsky.

This fall, both pianists were awarded substantial merit scholarships to their chosen university. Garimella will be attending the Rensselaer Polytechnic Institute in Troy, NY; whereas Svyatskaya will enter the University of California at San Diego.