Sparking A Career: Student From Los Alamos Prepared To ‘Tackle Almost Anything’ 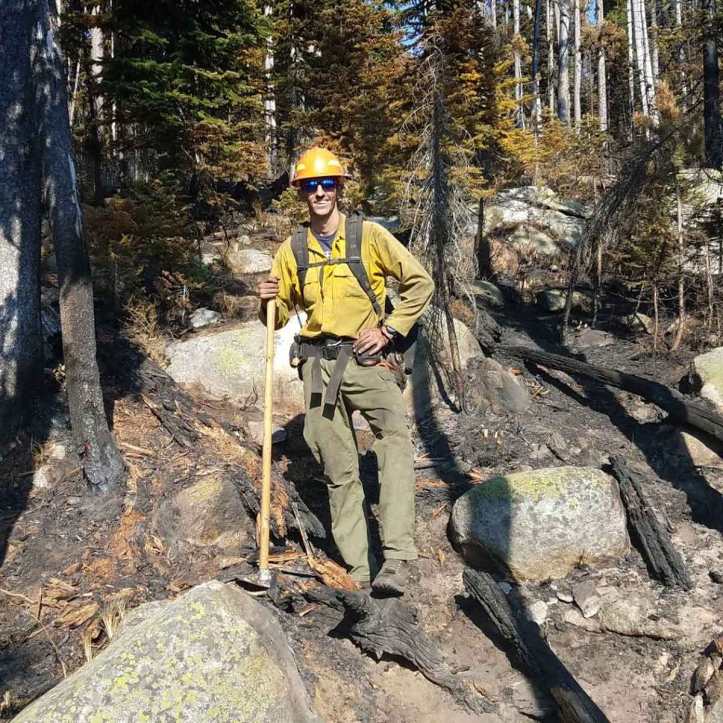 Dillon Alexander spent his childhood exploring the juniper woodlands and ponderosa pine forests near his home in northern New Mexico. Now, he graduates with a degree in fire management from the College of Natural Resources at the University of Idaho, building on a fascination that began in his youth in 2000.

It was the magnitude of these events, as well as the fire suppression response, that made a lasting impression on Alexander. Combined with his love for the outdoors, an interest in a career in natural resources was sparked.

“I was searching for wildfire programs that offered a bachelor’s degree in fire management and quickly stumbled upon the Fire Ecology and Management program at the University of Idaho,” he said. “I immediately knew that I had found the right place to pursue my higher education.”

Alexander relocated to Northern Idaho to gain experience in the field while also establishing his residency. He accepted an entry-level wildland firefighting position with the Clearwater-Potlatch Timber Protective Association (C-PTPA) in the rugged backcountry of Clearwater County, near Headquarters. The mission of C-PTPA is quick, safe initial wildfire attack on the more than 900,000 acres of industrial timberlands they protect. After working for a year, Alexander became an Idaho resident and began courses at U of I and his pursuit of a double major in the Fire Ecology and Management and Forestry programs.

“Because of the past experiences I’d witnessed with fire, I wanted to further understand the ecological role of fire and the management actions that can be effective in restoring the ecological health of the wildlands across North America, especially in Idaho,” said Alexander. “The University of Idaho offered me that opportunity.”

Alexander became involved in forestry-related clubs and organizations at U of I, including the Student Association for Fire Ecology (SAFE) and the Society of American Foresters, which pushed him outside of his comfort zone and allowed him to make connections professionally and socially. Alexander also worked at the U of I Experimental Forest as the fire program leader and participated in a prescribed burning trip to the Disney Wilderness Preserve near Orlando, Florida.

The SAFE club has a tradition of taking students to the East Coast during Spring Break to learn about ecologically-based fire management by performing prescribed burning with The Nature Conservancy. Alexander attended in 2019 and helped lead the trip in 2020. The experience, he said, enhanced his skillset.

“It was valuable for me to experience ignition patterns and witness fire behavior in a fuel type that is much different than I am used to working in,” he said, adding that becoming involved in clubs and organizations was one of the best decisions he ever made.

When Alexander first arrived at U of I as a prospective student, Heather Heward, SAFE faculty advisor, said she knew he would make an impact on the program.

“His willingness to participate in the experiences offered and to take on leadership positions to make those experiences happen has been a tremendous asset,” said Heward. “Dillon brings people together and makes it fun.”

Alexander has accepted a position as the assistant fire warden with C-PTPA after graduation, where he will assist in fire and hazard management, administrative duties and supervision of seasonal employees.

“I am excited to begin my career with C-PTPA,” said Alexander. “I enjoy the variety of work, including fire suppression and forestry-related tasks. The association has an awesome history and is filled with great people. It is an excellent place to work.”

Alexander said his Vandal experience prepared him well for his future career.

“It’s enhanced my skills in professional communication, collaboration with other professionals, writing and interpreting prescribed fire plans, computer modeling and mapping and developing a concrete understanding of fire management and forestry practices,” he said. “My University of Idaho education has prepared me to be successful.