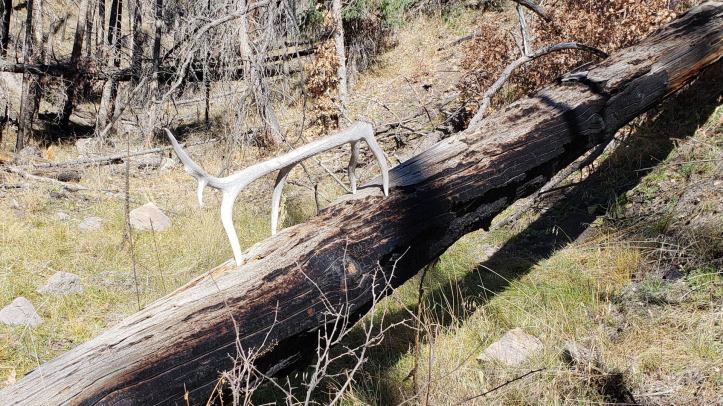 One of many sheds to be found throughout the area. Photo Courtesy NPS

One of the signs of spring in the Jemez Mountains is deer and elk shedding their antlers.  People like to collect these ”sheds”, which is fine on private land or areas administered by the Bureau of Land Management or the US Forest Service.  However, it is illegal on the Valles Caldera National Preserve or Bandelier National Monument and ​other National Park Service areas.

The National Park Service was established in 1916 and administers NPS lands using the 36 Code of Federal Regulations.  The 36 Code of Federal Regulations prohibits the removal of any park property, which includes antlers, bones, or skulls, as well as rocks, flowers, and artifacts like arrowheads,  potsherds, or old bottles and cans, etc…  Anyone caught collecting, disturbing or removing antlers or other items protected by law in Bandelier or the Valles Caldera Preserve can be fined, or even barred from the area for life.

Most national park units are considered “living museums,” where everything in the park is important to the story that is told there or to the natural functioning of the park’s ecosystem.  Shed antlers left on the ground provide an important source of minerals for many small animals. Antlers are bone and are mainly composed of calcium. Humans need calcium to keep their bones and teeth strong and growing normally; so do wild animals. Humans eat a variety  of foods, like milk, cheese, ice cream, and leafy green vegetables, to get the calcium they need. For wildlife, calcium is harder to obtain. Small mammals, like mice, voles, chipmunks, and ground squirrels, get calcium by gnawing on shed antlers and animal bones. Antlers left on the ground help these animals survive.

Although the gathering of a few antlers is thought to have little real impact on a park, with thousands of visitors coming to an area, or perhaps a few people illegally gathering quantities of antlers for commercial purposes, the effect can be large.  As one park official said, ”The unchecked collection of hundreds of pounds of antlers can make a difference to wildlife that depend on them, and their absence takes away from the wild character of the park that visitors come to enjoy.  Physically and philosophically, it does make a real difference.'”