Rotarians Hear About Himalayan Stove Project At Their Feb. 25 Meeting 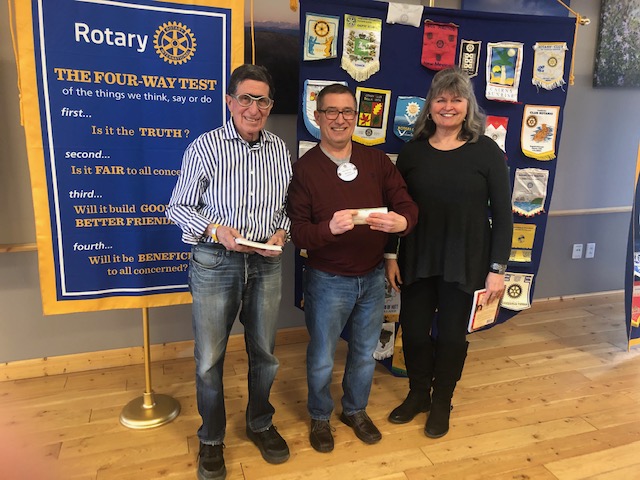 George Basch, left, founder of the Himalayan Stove Project, and Pam Miller, executive director, accept a check for $1000 from Rotary Club President Phil Dabney at the Club’s regular weekly meeting Tuesday at Cottonwood on the Greens. The donation will provide stoves for seven families in Nepal. Photo by Linda Hull 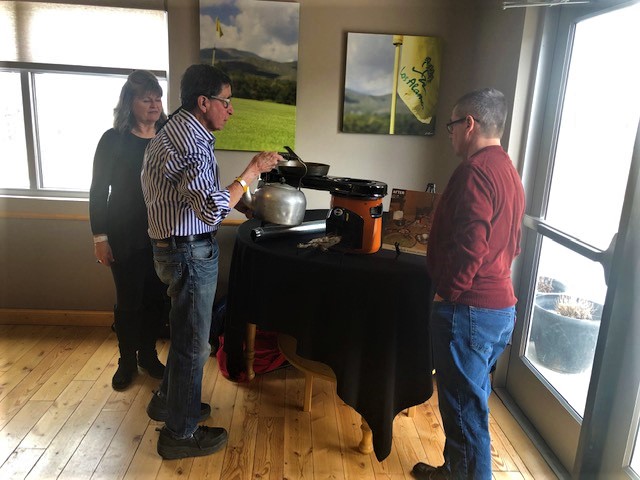 On Tuesday, Feb. 25, George Basch, a Taos Rotarian and founder of the Himalayan Stove Project (HSP), spoke to the Rotary Club of Los Alamos with HSP Executive Director Pam Miller.

As their website states, “The Himalayan Stove Project is a humanitarian and philanthropic program dedicated to preserving the Himalayan environment and improving the health of the people living there by donating and distributing free, clean-burning, fuel-efficient cook stoves. These transform the lives of individuals and families who now cook with traditional, rudimentary stoves or over open fire pits inside their homes, consuming excessive amounts of precious fuel and polluting the indoor air to dangerously unhealthy levels.”

A number of years ago, when corporate life no longer suited him, Basch turned to his lifelong love affair with the Himalayas.  He visited Nepal for the first time in 2001 and served as base-camp support for the team of Erik Weihenmayer, the blind American climber who summited Mount Everest.  In memory of his son, Basch established the Paul Basch Memorial Foundation and began searching for a meaningful project.  After a chance encounter with a fellow trekker in Bhutan, who casually mentioned a fuel-efficient stove, the concept of the Himalayan Stove Project was ignited.

To date, the HSP has transformed the lives of over 6,000 families in Nepal, and, coupled with earthquake relief efforts in 2015 and 2016, has changed the lives of 50,000 people in Nepal. A fuel-efficient, clean-burning stove delivered directly to a family in the Himalayas costs $150.

Basch is a member of the Explorer’s Club; in 2017, he received its Citation of Merit for the Himalayan Stove Project. Miller, with significant experience in major American corporations, including Procter & Gamble and Verizon Wireless, brings enthusiasm and commitment to her leadership role in HSP. To learn more about the Himalayan Stove Project, go to www.himalayanstoveproject.org.