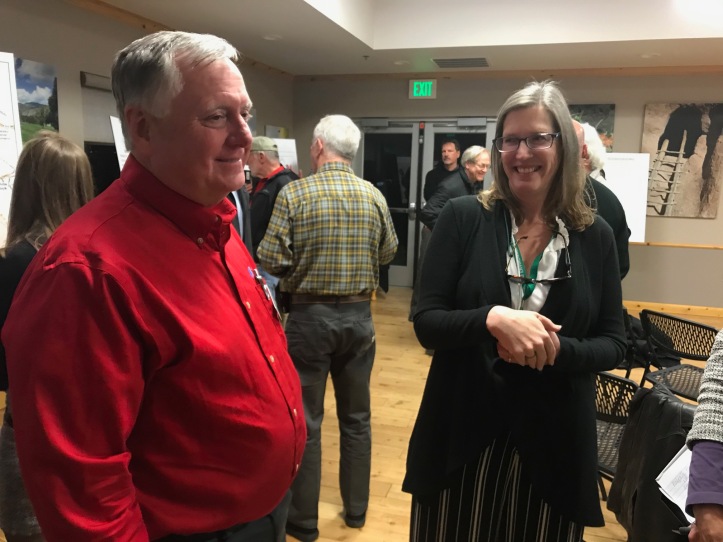 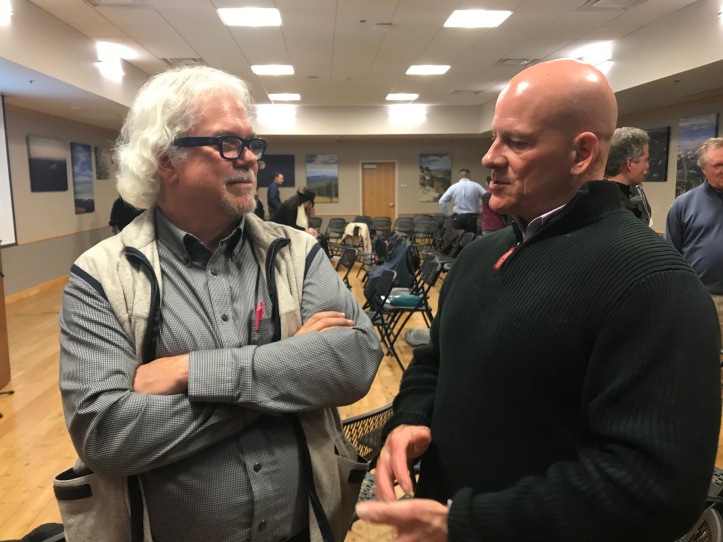 The budget includes a $100 million proposed cut from the $220 million EM-LA has received for cleanup for the past three years. Hoffman said what normally happens is that elected officials will get engaged in the issue of the reduction in funding.

“Until the outcome of that comes, we will enact our budget that is appropriated for us. It’s pretty straight-forward and that’s how we do it every year. We’ll do the same thing as we always do and focus on the two lines of effort that we currently have to complete our mission – solid waste and environmental remediation. In the environmental remediation category we strictly the 2016 Consent Order agreed with NMED,” Hoffman said.

He said the community forum was being held because the legacy cleanup mission is evolving.

“It’s dynamic and that means we’ve got some decisions to make and we’re reaching out to you all to participate with us. It’s not going to be the old days of us ‘deciding and defending’, we’re going to engage with you with participation along the way and you can help us. That different way means some skin in the game from you all and we appreciate you taking time out of your evening to be here with us,” Hoffman said.

Glenn Morgan, president of N3B-Los Alamos, the cleanup contractor for the Lab said he was glad to have such a great turnout. He said that at the last community outreach meeting, N3B had basically conveyed three things.

“First, we’re committed to transparency. There’s nothing classified on this contract, so we’re having open forums to get the participation and engagement of the community and the stakeholders. The second thing we said was that we’re going to need you in the decision-making process,” Morgan said. “Our job as the contractor here is to make sure that you have the requisite level of knowledge to be an active participant in those decision-making processes.”

He said that when the proposals are eventually sent to the New Mexico Environment Department, they will already have been worked out for the most part. Morgan noted that the plan is to engage the stakeholders and the public at different levels.

“We can go as deep as you want to. We have the technical expertise to take it as deep as anybody wants to go,” he said, adding that N3B has participated in public meetings more than 30 times on the cleanup issue.  “If you have a community group, invite us to come and we can talk about anything you want to. Our goal is to participate at a different level than you have seen in the past.”

N3B Executive Officer Joe Legare asked, “Why do we do this? Why do we do public engagement?”

“Honestly, when this all started in the 70s and 80s, even the 90s, we did it because we had to. It was the law,” he said. “Many of us evolved and decided the process is important. Contractors change in and out but the community is here to stay. The real epiphany was that we actually make better decisions when we involve the community, the pueblo, the neighbors, the local, state and federal governments, so that’s why we do this.”

He said obviously N3B has a notion of what  the law is, what the framework is and what’s regulatorily required but that there’s a lot of flexibility within that.

“By having the community engagement, we can make the best possible decisions with all of the opportunities and all of the constraints that go along with this,” Legare said.

He noted that as N3B work its way through their baseline, their schedule, they need to make decisions.

“In some cases the framework is important. The basis is always to protect human health and ecology, protect groundwater and surface water. So whatever that final decision is, it has to do that, it’s foundational,” Legare said.

He said 10 years ago, public involvement normally happened pretty low down in the decision-making process. By involving stakeholders and the community, when the regulators roll decisions out for public comment, people are aware of what’s coming.

“We all say, ‘yeah we’ve seen that, we’ve talked about it in detail, we understand this approach and with all of my interests considered, I favor this approach’. That’s our goal,” Legare said.

He noted that many of the prior community engagement meetings have been at a higher level.

“This meeting marks the transition now to the opportunity to dig in at future meetings to the extent that you’re interested in these projects and want to shape the final decisions,” Legare said.

“We got feedback from the first round of our community forums that you wanted a chance to speak and so we’re going to do that this evening,” he said.

Speakers included Beata Tsosie Pena from Santa Clara Pueblo said she appreciated the inclusion of community member in the process moving forward. She said there are lots of ideas and solutions that combine indigenous knowledge with western technology, that combine bio and micro remediation and restorative methods that “aren’t just putting molasses and vegetable oil in the plume”.

“It’s like looking at a whole site-wide restoration of our natural systems to strengthen these sites so that they also heal themselves. These sites are also indigenous sites – ancestral Tewa land. We would like to see that recognized and acknowledged at these meetings to make them more relevant for our communities,” she said. Tsosie-Pena said testing in agricultural fields in Espanola for RDX is needed as well as studies on a broader scale outside the boundaries of Los Alamos.

Los Alamos County Council Chair Sara Scott said she appreciated the continued message of engagement and interaction with the community about how some of the decisions proceed.

“When I look at the schedule (for future meetings) I see outreach to different groups – technical working groups – with the goal that you have of evaluating and defining with community input on cleanup alternatives. When will the community know it’s time to sit down and look at the data?” she asked.

Lockhart responded that technical working groups will deal with the details and that the County will be kept apprised.

Scott Kovac asked how worried EM-LA and N3B are since the other sites seem to have stronger agreements with DOE such as Idaho and Hanford.  He asked if the proposed $100 million cut in cleanup funding changed anything about what EM-LA and N3B are presently doing.

EM-LA Field Office Manager Doug Hintze said it is the beginning of EM-LA’s process for how they put in a congressional budget request.

“Of course that’s the executive branch and then congress is the one that’s appropriating. If you look at the last three years, DOE-EM for Los Alamos requested $195 million roughly and we received for the last three years $220 million. As opposed to looking at the request here as ‘woe be us’, it’s an opportunity for all of us to go back to our congressional delegations to make sure, (we don’t lobby  – we’re the executive branch) but it’s your opportunity to go out there and make your opinions known about the importance of this work and so forth,” he said.

Hintze said the President’s Budget is just the beginning of the process.

“We have not told our N3B partners to stop work. If we stop work now in anticipation of next year and then Congress appropriates the funding, it’s harder to start back up. This is the time that people start getting worried because it has the potential to affect jobs and so we’re trying to make sure we can stabilize and make the best decisions based on the actual funds that are enacted,” Hintze said. “Right now I would say that no, we haven’t changed our operations this year but you can guarantee, it doesn’t take a rocket scientist, if you’ve got $100 million cut out of a $220 million budget there would be impacts into the year coming up.”

He noted that ENM-LA doesn’t have significant drivers like a big facility that needs to be built like Hanford, Wash.

“How quickly we do cleanup depends on the funding we receive. That’s why you’re out here to make sure as we go forward you understand what we’re trying to do here so that you can go back to your congressman and say ‘hey, we need the money to continue to do these, and these are our priorities’. Our job is to execute whatever is enacted and so we’re starting to make plans,” Hintze said.

Both Hintze and Morgan said they are working to keep the workforce focused and not distracted.

“We’re trying to make sure that we maintain that safety posture because that’s the most important thing we have – our workers, the environment and public safety,” Hintze said.