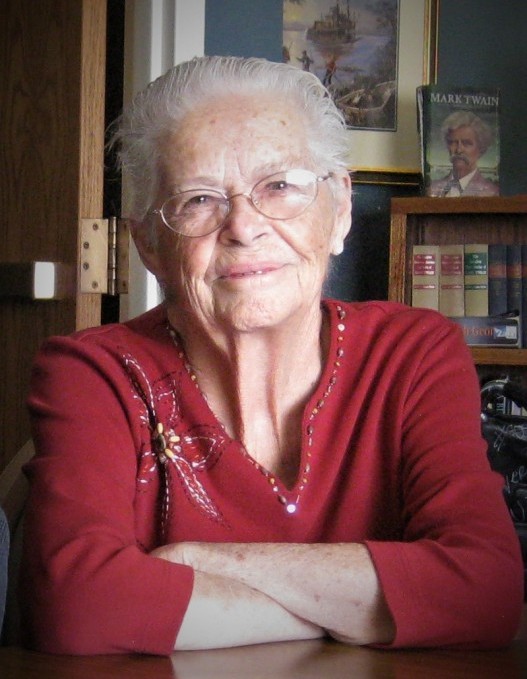 Joyce Reiss Bradberry had a philosophy that life should be enjoyed while still being constructive, worthwhile and filled with faith.  The fourth daughter of George and Bertha Hagans, Joyce was born in Denison, Texas and it was in these formative years, surrounded by love and joy, that she established her faith in God and developed a service-oriented life.  Joyce died on Jan. 24, 2020 at the age of 90 years, 1 month and 6 days.

Joyce came to New Mexico in 1961, joining her sister Mary Rambo in Silver City.  She quickly affiliated with the Tyrone, NM chapter of Eastern Star.  She met and married Levi Bradberry who preceded her in death in 1996.  She lived in Bayard, New Mexico for about 50 years.

Joyce was involved in community affairs.  She served as secretary of the Bayard Chamber of Commerce and was an active member of the Grant County Chamber of Commerce.  She served as president of the Silver City Business and Professional Women’s Club, which helped establish the Bayard Public Library, and was Charter President of the Pilot Club of Grant County, a women’s service organization.

She worked for Kennecott Corporation in the Public Relations Department in communications and publications.  She developed the ability to prepare and deliver talks or speeches.  Many times, she would forget the exact word or phrase, and rather than acknowledging her failure to remember the exact words, she would re-write the talk on the fly.  Rarely at a loss for words, she could always handle any situation with dignity and grace.

One of Joyce’s crowning accomplishments was her election to Worthy Grand Matron for the State of New Mexico in 1980.  During her term she visited all 59 Chapters, traveling from corner to corner of New Mexico.  She encouraged others to create joy and understanding, to be kind and to promote love of God, Country and the Order of Eastern Star.

Joyce loved hummingbirds.  She had numerous feeders for them in the summers, a hobby that continues in several of her family’s homes.  The hummingbird was her Symbol during her term as Worthy Grand Matron.  As she said, “The hummingbird is a symbol of intelligent industry,” confirming her philosophy of living a constructive and worthwhile life.

Joyce’s final resting place will be with her husband, Levi, in Fort Bayard National Cemetery.

The family appreciates Sombrillo for the years of care and Los Alamos Visiting Nurse Service for Hospice assistance. In lieu of flowers, donations in her memory can be made to Los Alamos Retirement Community (Sombrillo), Los Alamos Visiting Nurse Service or to the Eastern Star Chapter of your choice. The family of Joyce Reiss Bradberry has entrusted their loved one to DeVargas Funeral Home & Crematory of the Española Valley. 505-747-7477 – www.devargasfuneral.com