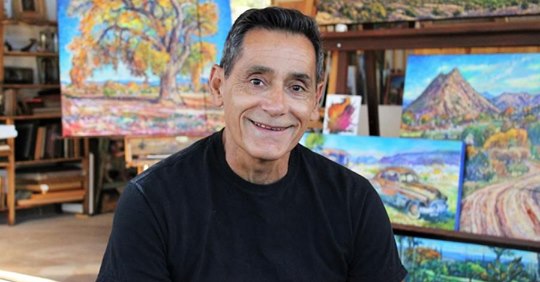 Roger Montoya traveled to New York this week for the announcement of the CNN 2019 Hero of the Year. Courtesy photo

Voting has closed for the 2019 CNN Hero of the Year but the excitement continues to rise in Northern New and while Roger Montoya, founder of Moving Arts Espanola and one of 10 finalists from across the nation, travels to New York for the Dec. 8 announcement, there is lots of action going here at home.

Montoya is being hailed by friends and supporters on social media. One person wrote, “Roger, you are our hero no matter what and you have our hearts and faith and we are as good as it will ever get. The  CNN award is just a cherry on the amazing cake you already have. I have always thought of you as a hero since the day I encountered your magic. Let’s hope all the prayers and votes add up, but you are already a winner to so many. More than that you are the best medicine our communities and youth could have ever asked for”.

Buffalo Thunder Resort is hosting a giant free watch party and welcoming 1,000 people from throughout the community to their ballroom to watch the awards show, the 13th Annual CNN Heroes All Star Tribute hosted by Anderson Cooper and Kelly Ripa, streamed live from the American Museum of Natural History in New York City. Coordinators are Ralph Martinez and Andrea Lucero.

The pre-show party is slated to begin at 4:30 p.m. (doors open at 3:30 p.m.) and will include food and refreshments compliments of Espanola Moving Arts, the Pueblo of Pojoaque and Buffalo Thunder. As friends and family await the announcement of the winner, pre-show performances by young Northern New Mexicans will highlight rising stars in leadership, the arts, academics and sports. The confirmed line-up of the pre-show includes: Moving Arts Espanola, New Mexico School for the Arts, regional basketball and cheer squads from Pojoaque, Espanola and McCurdy schools,  Espanola YMCA Teen Center Robotics Champions and Espanola’s favorite musical stylings by ‘Grupo Divino’.

The live broadcast of CNN 2019 Hero of the Year begins at 6 p.m. Just before the show, Montoya will send a streamed message.  Jon Bon Jovi, Anthony Mackie, Caleb Mclaughlin, Storm Reid, and Andy Grammer are among the celebrities that will be part of the show.

The winner of the competition will receive $100,000 to continue their work. The 10 finalists including Montoya will each receive $10,000.

The honorees will also receive free capacity-building training from the Annenberg Foundation, a leading supporter of nonprofits worldwide. They will participate in a customized version of the Annenberg Alchemy program in Los Angeles, Calif., which offers leadership development to help strengthen organizations for long-term success.

In addition, CNN has partnered with GoFundMe Charity™ to enable people to donate to the 10 finalists. As of Wednesday, Montoya was leading the group with donations of more than $25,000. Supporters can make online donations to the Top 10 CNN Heroes’ nonprofit organizations, including Montoya’s, directly from CNNHeroes.com.

STACI ALONSO (Las Vegas, NV) Alonso’s nonprofit, Noah’s Animal House, located on the grounds of domestic violence shelters, allows women to keep their beloved pets close as they get back on their feet.

FREWEINI MEBRAHTU (Mekelle, Ethiopia) Mebrahtu along with partner, Dignity Period, is fighting the cultural stigma around menstruation in Ethiopia by educating students and producing reusable pads that help girls stay in school.

MARK MEYERS (San Angelo, TX) Meyers and his nonprofit, Peaceful Valley Donkey Rescue, are dedicated to rescuing abused and neglected donkeys and giving them a new lease on life.

RICHARD MILES (Dallas, TX) Wrongfully convicted for a crime he did not commit at age 19, Miles served 15 years in a Texas prison. Now he and his nonprofit, Miles of Freedom, help the formerly incarcerated restart their lives.

MARY ROBINSON (Mountainside, NJ) Robinson’s nonprofit, Imagine, A Center for Coping with Loss, provides tools, support and a place to heal for children grieving the loss of a parent or sibling.

AFROZ SHAH (Mumbai, India) What started as a personal journey to clean one beach turned into the world’s largest volunteer beach clean-up. The Afroz Shah Foundation is on a mission to protect the ocean by clearing trash from beaches and waterways and through education.