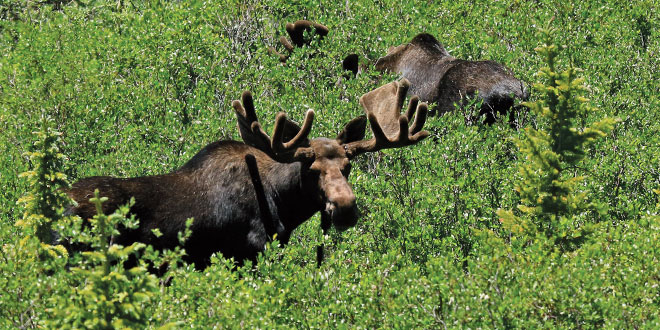 Moose have called the Rocky Mountains home for millennia but have never been found as far south as New Mexico, until recently.

Since the 1990s, moose have occasionally been spotted in northern New Mexico around the Taos, Chama and Tierra Amarilla areas. When they do roam across the border, the sightings make it into local media. Over the past two years, locals captured a photo of a lone moose seen strolling along State Road 522 near Costilla, and an earlier photo of two cow moose spotted in a field in Chama.

“Most people think it’s an elk,” said Taos Supervisory District Sergeant Gabe Maes, who has been stationed in northern New Mexico since 2007. “That is the first reaction for most folks. It’s an unusual sighting for the area.”

The natural range of moose, which spans from Alaska across Canada and reaches down to New England and northern New York in the east, extends as far south as Wyoming, Colorado and eastern Utah in the western United States.

The native range of moose has never included New Mexico; however, over the last several years, a few members of the species have ventured south across the Colorado border into the northern part of our state.

“Though these are rare occurrences they do seem to happen especially on dry years,” said Sergeant Ben Otero, who supervises the areas of Chama, Cuba and Taos with the Department of Game and Fish. “The moose seem to follow the river down and come to the irrigated fields for the green alfalfa and water sources.”

In fact, there were never any reproducing populations of moose in the southwest, said Jennifer Frey, a professor in the Department of Fish, Wildlife and Conservation Ecology at New Mexico State University. Moose are native to the northern Rocky Mountains but not the southern Rockies, which includes the San Juan and Sangre de Cristo Mountains. The type of moose in Colorado is a smaller subspecies, Alces americana shirasi—than the moose in Alaska, she added.

“In New Mexico, the moose we have in the state are undoubtedly wanderers, males or females,” said Frey. “These occasional records of moose in New Mexico are probably not reflective of a breeding population and are just occasional individuals.”

Based on media reports, the first recorded moose sighting in New Mexico was in 1995 when one was found near Taos, said Jim Stuart, non-game mammal specialist at the New Mexico Department of Game and Fish, citing media reports. Until the late 1970s, moose were only vagrants in northern Colorado, periodically heading south from Wyoming.

In the 1970s, Colorado Parks and Wildlife transplanted moose from Utah and Wyoming into the North Park area of that state to establish a population for future hunting opportunities, according to the agency’s website. In the early 1990s, Colorado transplanted additional moose to the San Juan Mountains, where the animals eventually established in the southwestern part of the state near the New Mexico border.

Colorado Parks and Wildlife notes on its website that “since the transplants, our moose have thrived and expanded their range into good habitats,” adding that the state’s moose population now approaches 3,000 animals.

Frey suggested animals could simply be following the vegetation through the San Juans. “Anywhere there is a continuous corridor of vegetation, that makes a natural dispersal corridor,” she said.

Still, it is unlikely the animals are, or would ever, expand their range south in droves.

“None of these represent an established population in New Mexico,” said Stuart, who refers to moose in New Mexico as “vagrant” animals. “They’re presumably wanderers coming out of the San Juan mountains. It’s sporadic, we’re not seeing them on a regular basis. Possibly these are young moose dispersing to find mates or to establish a territory. At present, northern New Mexico can be thought of as the fringe of the occupied range that is centered in the San Juans of Colorado.”

Moose are particularly drawn to areas with beaver dam streams, lots of cover and dense riparian vegetation, Stuart notes. “We’ve got some of that in the San Juans and Sangre de Cristos, but we may not have enough to sustain a population,” he said. “But we might still have individuals come out of Colorado, just a few that can find those spots and survive here for a while. It’s possible they eventually wander back into Colorado where the habitat is more suitable.”

Colorado, which has more riparian habitat, has more of the raw material to support a population of moose, explained Frey.

“I don’t think the presence of moose [in New Mexico are] trying to establish a population in this state would be a good idea,” Frey continued. “In New Mexico, we already have a problem with our riparian and wetland systems being degraded. There is effort to try to restore riparian vegetation in our streams. Having such a species here would be counter-productive at this point.”

If members of the public believe they have spotted a moose, Maes noted, “Let us know at the Game and Fish Department because we are interested in identifying these sightings and instances when they come down into New Mexico.”

Alexa J. Henry is the editor of New Mexico Wildlife magazine. She can be reached at Alexa.Henry@state.nm.us