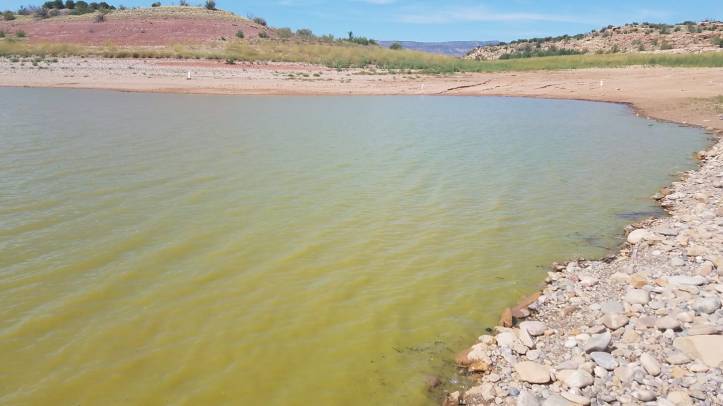 Algae levels remain elevated along the shoreline of Abiquiu Lake. Rangers continue to test levels as it can change rapidly, but at this time the swimming closure remains in effect. Water levels are also low as explained by John Mueller below. Photo Courtesy BOT

I wanted to provide an update on Abiquiu Dam and Reservoir as we have been fielding a large number of inquiries regarding the current water level situation. Many of our visitors crest Trujillo Hill expecting to find a full reservoir due to the higher than average snow pack that we received this winter, but are shocked to see the water level is so low.

The reason for this is based in the congressionally authorized purpose of the dam: flood control and water supply. Abiquiu was the second dam built on the Chama river completed in 1963, with El Vado, a Bureau of Reclamation (BOR) dam being the first completed in 1935. El Vado is authorized to store native Chama water while Abiquiu is only allowed to store San Juan Chama Diversion water, all native water must be passed through and only stored for flood control purposes and released once the flood risk has passed.

The San Juan Chama Diversion is a 25-mile tunnel completed in the late 1970s crossing the Continental Divide collecting water destined for the San Juan River in southwest Colorado and sending it through the tunnel crossing into New Mexico where it is impounded by Heron Reservoir, built for this purpose also by the BOR. The San Juan Chama water is purchased and used, the largest owner being the City of Albuquerque. Historically for the past 30 or so years, City of Albuquerque has stored their share of the SJC water in Abiquiu as they relied on the majority of their water from an underground aquifer.

Around 10 years ago it was discovered that this aquifer was not nearly as large as once believed and a new water management plan was needed. This new management plan included building a surface water treatment facility to treat surface water and begin utilizing the SJC water. This has been occurring since 2009, the last time Abiquiu Reservoir was at full storage capacity of 6220 elev ft (roughly 180,000 acre ft), was December 2011. We have been storing less every year since as this water is being utilized by the owners.

Due to this management shift the lake will be operating in a much lower surface range, generally from 50,000 – 100,000 acre ft. Currently our storage is at 58,703 acre ft and Reservoir Control has advised me that we should be staying at this general level until September when SJC water will move from Heron Reservoir to Abiquiu increasing Abiquiu storage to roughly 90,000 acre ft.

I understand this is big change for us all and causes many difficulties, our staff is doing its best to augment the recreational infrastructure to accommodate the new shoreline. This includes an extension of the main boat ramp that is scheduled for implementation this year.

In regards to downstream river operations, our channel capacity for releases is set by our Water Control Manual. This max release is 1800 cfs due to acequia structures in the river, and this max release is reached at least once a year generally in the spring during the runoff season. This release not only serves to move native water downstream but also flushes the river channel in order to help maintain the 1800 cfs release capacity to evacuate flood water safely and efficiently. Flows are monitored to ensure the USGS Chamita gauge does not exceed 4,000 cfs. Abiquiu releases will be reduced if flows exceed 4,000 cfs at the Chamita gauge and also for life safety or major property damage.

As always please contact the Abiquiu Lake Project Office at 505,685.4371 for any questions and information regarding current conditions and forecasts.