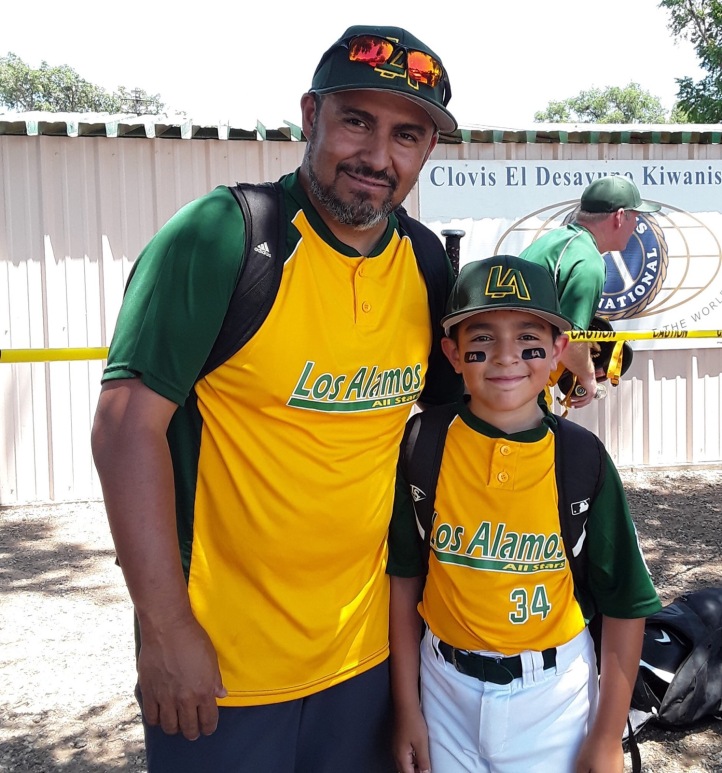 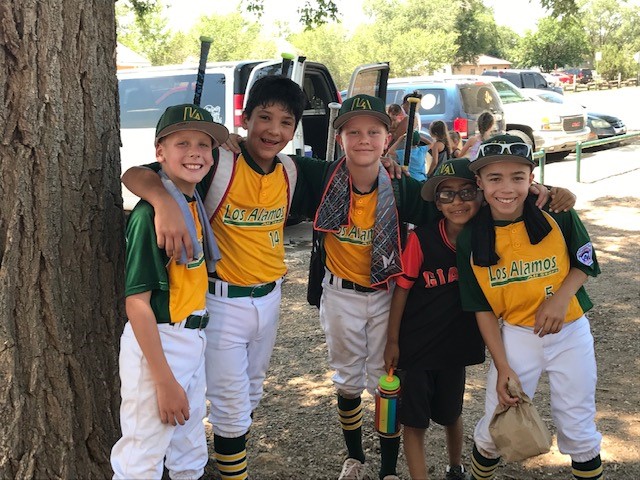 Celebrating after a win. Courtesy photo 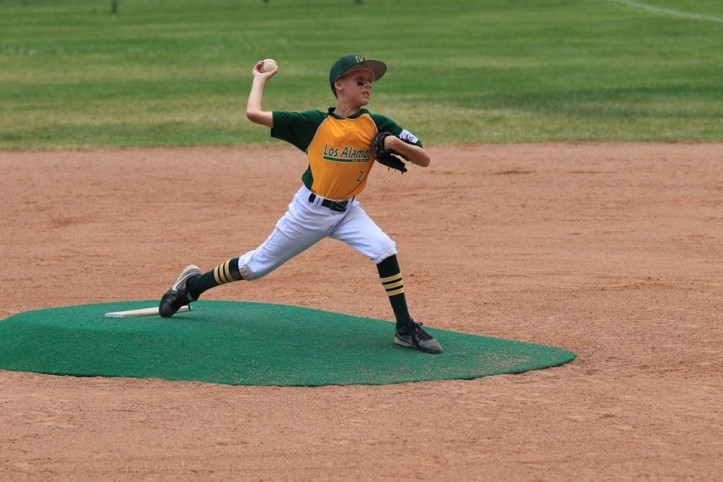 Maclain Griffin during a game in Clovis. Courtesy photo

The 2019 baseball season was one of the best for Los Alamos County Little League in many years with the 9-11 year olds All Star Team taking fourth place at the State Tournament.

The team was selected in early June and began practicing several days a week throughout the month. The practices involved a huge time commitment for players, coaches and parents who dedicated themselves to being there on a daily basis working on building a consistent team that played hard and made limited errors on the field.

“We all had a common goal to not only make it to the State Tournament, but to play well enough to show other teams from around the state that Los Alamos has some ball players that can compete with anyone,” team manager and head coach Joe Martinez told the Los Alamos Reporter. Martinez and assistant coaches Jordan Garcia and Gary Watkins led the team through the season.

This year’s District tournament began for the team with a June 29 game against Espanola Valley Little League. Martinez said the team came out aggressively and was able to get an early 3-0 lead in the first inning. From there the Los Alamos pitchers and defense held Espanola scoreless and ended up with a 5-0 win. Ben Dattelbaum, Graeme Martinez and Aden Garcia combined to pitch a shutout and the team combined for seven hits during the game with Hayden Watkins having two hits.

On June 30, the team played Santa Fe Little League stepping things up with 15 runs in the 1st inning and adding another nine runs in the 2nd inning.  The game was stopped early when the score was 24-2. In that game, Hayden Watkins, Aden Garcia and Terran Robertson combined to pitch a no-hitter with the offense led by Brodi Miller and Hayden Watkins who each had two hits. The team ended up with 15 total hits during the game.

Los Alamos faced Espanola again in the District Championship July 2 after Espanola worked their way through the consolation bracket.

“Our team was really focused on coming out strong and getting an early lead like we had during the two previous games. The boys got some hard base hits early in the inning and we were able to take a 5-0 lead in the first inning.  That first inning set the tone for the rest of the game and ended up taking the District Championship by a score of 14-4” Martinez said.

Hayden Watkins, Adrian Oshel, and Ben Dattelbaum led the team in hitting during the championship game with Luke Watkins pitching three strong innings and Adrian Oshel coming in relief to close out the game for the team.  The team ended up with a total of 15 hits during that game as well.

“I give Espanola’s team a lot of credit.  At one point they were down 9-0 and it would have been easy for them to lose focus and just give up.  But they battled back and scored four runs over the next two innings and made us work for that Championship win.  Their players and coaches really showed that they were ready to compete until the very end,” Martinez said. “The Espanola fans were great as well.  During the post-game pin ceremonies, several Espanola fans made it a point to congratulate our players and coaches and wish us well during the State Tournament.”

Martinez said the Los Alamos team only had about a week and a half after the District Tournament before the State Tournament started.

“As coaches, we wanted to make sure that the team wouldn’t lose focus on the ultimate goal of winning a state championship. We also knew that the summer heat of southern New Mexico could potentially affect our boys’ stamina and focus, so we tried as best we could to prepare them for that as well,” he said.

Los Alamos played their first State Tournament against Enchantment Little League from Los Lunas, immediately coming out strong in the first inning with three runs. Enchantment came back with two runs of their own, going on to add three runs in each of the 3rd and 4th innings, beating Los Alamos 9-4. In that game Ben Dattelbaum pitched four innings and Aden Garcia led the team on offense with two hits and two runs batted in.

“You never want to lose the first game of a tournament because it puts you in a position where you have to work your way through the consolation bracket in order to make it to the championship game. There is very little room for error when you’re in the consolation bracket and you could get sent home fairly quickly with a second loss,” Martinez said. “Ultimately, I think our team learned a good lesson from that first loss.  When you have a lead on another team, you can’t let up.  You have to keep the pressure on them, especially at the State Tournament where every team has great ball players and they all have the ability to come back and beat you if you don’t stay focused.”

In the next game, the team rallied and beat Silver City Little League 14-0 with Hayden Watkins pitching a three-hit shutout and the team as a whole having 14 hits. Brodi Miller and Luke Watkins led the team with two hits and two runs scored each.  “I think that game against Silver City gave our boys a lot of confidence. They proved to themselves that they could beat those teams at the tournament and they were able to carry that confidence with them into the other games later in the tournament” Martinez said.

Los Alamos then took on Taos Little League which Martinez said was a really tough team with great pitching that held Los Alamos to only five hits the entire game. Pitchers Luke Watkins, Adrian Oshel and Aden Garcia only allowed one run during the entire game and Los Alamos won by a score of 3-1.

“Our team came to the field ready to show Enchantment that they didn’t get the best version of our team during the initial game against them. We immediately scored two runs in the 1st inning, three in the 2nd inning and another two in the 3rd inning. Our pitchers and defense held Enchantment scoreless for the first three innings of the game but then Enchantment came back to score four runs in the 4th inning to cut our lead to 7-4, Martinez said. “Enchantment added another run in the 5th inning and one last run in the 6th inning.  Our defense held strong in those last two innings and we were able to hold and win by a score of 7-6.”

The last game for Los Alamos was against the Shorthorn Little League team from Carlsbad.

“They were a really tough team and there weren’t many highlights for us during that game. Shorthorn held us scoreless for the first three innings and scored a total of 12 runs during the first four innings but our boys never gave up.  Our pitcher did a great job throwing strikes but their hitters kept finding holes in our defense and they ended up beating us 12-1, “ Martinez said.

He said overall, the Los Alamos team accomplished some great things with their run at the State Tournament.

“Our boys gained a lot of confidence by beating some really great teams during the tournament and we proved that we can compete with anyone in the state.  This postseason run was a real team effort, every single player on our roster contributed with a big defensive play, a timely base hit, or a great pitching performance that helped us win games.  They should all be proud of themselves,” Martinez said.

He congratulated the team members and thanked the players’ families for their great support throughout the season.

“Team parents organized awesome team-building activities such as swimming parties, cookouts and a trip to a Santa Fe Fuego professional baseball team game. They provided exceptional support for our team and deserve a great deal of the credit for this team’s success,” Martinez said. He thanked his assistant coaches Garcia and Watkins as well as league president Magdalen Miller, safety coordinator Allison Watkins and LA All Stars coordinator Jason Martinez.