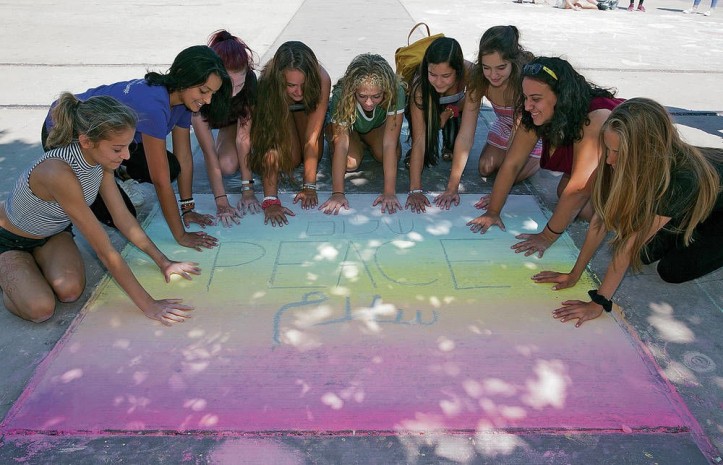 The community of Los Alamos will have the opportunity to hear four young women who are part of Creativity for Peace’s leadership program share their stories of life and reconciliation in the face of war. The event will be held from 11:15 a.m. to 12:30 p.m. Sunday, Aug. 4 at the Unitarian Church of Los Alamosestion and answer period with the audience.

The four young women are taking part in the 21st Creativity for Peace camp session along with 16 high school girls from Palestine and Israel who are beginning their training as leaders and peacemakers. While in New Mexico, the group takes part in intensive dialogue, collaborative art projects, experiential activities and social time – all vehicles that help them transform anger and prejudice into compassion and friendship.

Since 2003, more than 300 teen girls of Jewish, Muslim, Christian and other faiths have participated in this Santa Fe-based program. After the summer, gatherings and leadership trainings continue year-round in Israel and Palestine.

In their three weeks in Santa Fe, campers will attend a dress rehearsal at the Santa Fe Opera, climb the high ropes at the Santa Fe Mountain Center, cook New Mexican food with Chef Johnny Vee and perform acrobatics with the Wise Fool circus ensemble – activities that empower and build friendships.

Young Palestinian and Israeli women arrive in New Mexico with deeply felt hopes and convictions, such as these expressed by 2018 campers:

“Peace is not something that happens when you sign a piece of paper, its means that both sides need to know and trust each other.” –Eden, Jewish Israeli

“I think that sustainable peace can’t happen without the two peoples going through a deep process of historical reconciliation.”  –Mais, Palestinian living in Israel

“Peace can be achieved when we have common ground, when we do not judge, when we give the other the benefit of the doubt and when we treat each other as humans.” – Dania, Palestinian

Although they live geographically close, Palestinians and Israelis (even inside Israel) do not know one another. Their native languages are different, they attend separate schools and live segregated lives. West Bank Palestinians are separated from Israelis by walls, checkpoints and soldiers. What the young women know about each other is greatly affected by family stories, media, schools and other institutions on both sides that perpetuate racism and fear. They have never lived in a time of peace and most have lost loved ones to the conflict. Their mistrust and anger towards one another are based in real-life experience.

Over the course of the last decade and a half the situation on the ground in Israel/Palestine has deteriorated and the international community has shown signs of fatigue in its search for a resolution. Creativity for Peace is committed to providing young women opportunities to learn about one another, identify common cause, build trust and support the universal desire for a peaceful future.

During camp, young women undergo significant transformations, including fundamental changes in attitudes, reduction in prejudice and the motivation to return home to work for peace. Many of their friendships have endured for more than a decade. This is what we believe lays the groundwork for a future of peace.

The organization’s impact extends far beyond an intense experience of reconciliation in the mountains of New Mexico. Through the Young Leader program, many young women remain involved and deepen their skills over a period of years. As they complete their educations and step out into the world, they are poised to move into positions of responsibility in their home countries and eventually to become leaders dedicated to peacemaking.

Creativity for Peace alumnae have spoken at such venues as the World Economic Forum in Davos and the United Nations in New York City. A number work with social justice organizations and reconciliation projects in Palestine and Israel.