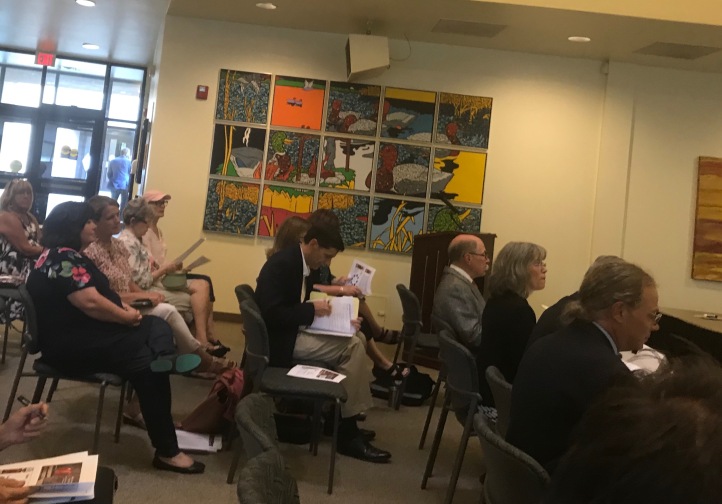 The hearing before the PEC was on the application of the Polaris Charter School proposed governing committee to the state for approval of the charter school. Hargraves is a member of the proposed governing committee and was one of the presenters at Tuesday’s meeting. He has been a part of the charter school organizing team since its inception and prior to that, was involved with the XQ team which explored what an ideal high school might look like.

The issue of Hargraves’ potential conflict of interest as a board member involved with the Polaris team was first raised by McCumber in November 2017 as then chair of the school board. McCumber felt there was potential conflict of interest as it related to the board and its supervision of Supt. Kurt Steinhaus. At that time she raised the issues of the board being possible decision makers in the charter school application process and alleged that Hargraves being on the Polaris committee put Steinhaus in an awkward position.

Ellen Ben-Naim, who now chairs the board, noted at that time that Hargraves had gone out of his way to separate his role as a board member from his role on the charter school committee. During the discussion, Hargraves explained that the Polaris committee had emerged when the board in early 2016 chose not to pursue the option of a different learning environment following on from the XQ project. Hargraves at that time told the board that he was smart enough to know how to keep the two roles separate.

Hargraves also said at that meeting that he would like for the board to have a discussion about the proposed charter school because the board was faced with a decision of whether or not it wanted to wok with the Polaris team and have the “district kind of option” rather than Polaris applying through the PEC. He asked the board to consider that the Polaris application was a very important community. He said the Public Education Department was willing to work with them to help them understand the impact a charter school might have in the community. wh

“We encourage the board to take this on and try to understand it. If we have a state charter school it will change the climate of education in the community even if there’s only a few kids,” Hargraves said. He said whether the Polaris team went through the school district or the state was up to what the school board wanted to do but added that it seemed kind of silly for a charter school to operate under the state.

At that meeting, McCumber said she was not at all knowledgeable about the charter school application. She said she hesitated to adopt the “partnership attitude” Hargraves was describing because as an elected official her duty and responsibility was to the school district. Hargraves suggested that the best way to discuss the charter school proposal was to have meetings. He said he had expressed his opinion but that the board’s position was unknown.  McCumber said the board had learned about the proposed charter school “externally” and had never been approached by the Polaris team and that no presentation had been put forth. She said the superintendent had more than enough to do and that his position is also neutral.

PEC member Karyl Ann Armbruster was also at that November 2017 meeting. She pointed out to the board that the Polaris committee didn’t even need to tell the board  about their application until the January date for submittal. She told the board that the PEC would come to Los Alamos for input as part of the process and that at that time any member of the community could address the PEC. Armbruster stressed to the board that charter schools are public schools.

At the meeting, McCumber presented a legal opinion concerning McCumber’s perception of a conflict of interest for Hargraves which she and Steinhaus had requested from attorney John F. Kennedy of Cuddy McCarthy. This opinion was subsequently referenced by McCumber at Tuesday’s PEC hearing and also at Tuesday’s school board meeting.

Kennedy’s opinion was that as a citizen, Hargraves “has the right to participate as an organizer of the prospective charter school but it would pose a conflict of interest for him to be a member of the charter school’s governing body of the applicant for charter school approval, when the charter application is submitted either to the local school board, or to the PEC, which has the authority to appove state charters under the Charter School’s Act”.

Kennedy’s letter stated that he cautioned Hargraves that his activities as a member of the charter school’s organizing group must be kept scrupulously separate from his role as a public school board member.

The opinion also addressed a question asked of Kennedy by Steinhaus and McCumber as to how Steinhaus should address requests for his involvement by the charter school group for his involvement by the charter group. Kennedy’s advice was that while McCumber, Steinhaus and Hargraves had advised him that they would like to work cooperatively, how far Steinhaus goes in “supporting” the charter school effort is a matter which the superintendent and the school board should decide because of this inherent tension and potential conflict”.

At Tuesday evening’s school board, 20 months later, Kennedy’s opinion and Hargraves’ potential conflict of interest was again discussed at length with Hargraves’ four fellow board members expressing their concerns about the issue. Board chair Ellen Ben-Naim said she was disappointed and sad that the board is “in this position”. She said the New Mexico School Board Association code of ethics tells board members to avoid being placed in a position of conflict of interest.  Hargraves pointed out that other board members have had conflicts of interest.

“I don’t know exactly what you’re asking me to do. I have no interest in being on two boards. Conflicts of interest have been identified on the past and dealt with,” he said.

Hargraves said he had consulted the state Charter Schools Division.

“They told me straight and outright that I’m not in violation of any statutes they’re aware of,” he said. He added that he was willing to participate in any review and that if any illegality is determined, he is “perfectly willing to make a decision on whether or not I want to stay on the board or participate in Polaris”. Until that point Hargraves said he can manage the conflict of interest in a way that he can “do both at least until the election is over”.

“I’m not doing anything illegal. I sought legal advice and I’m acting on it, “ he said.

Hargraves’ term of office ends in December. The election for a board member to replace him will take place in November. The PEC is required by statute to make a decision on Polaris by September 1.