The Boese Brothers logo on each table top is one of the additional touches brothers Sam and George have added to the decor at their new location. Photo by Maire O’Neill/losalamosreporter.com 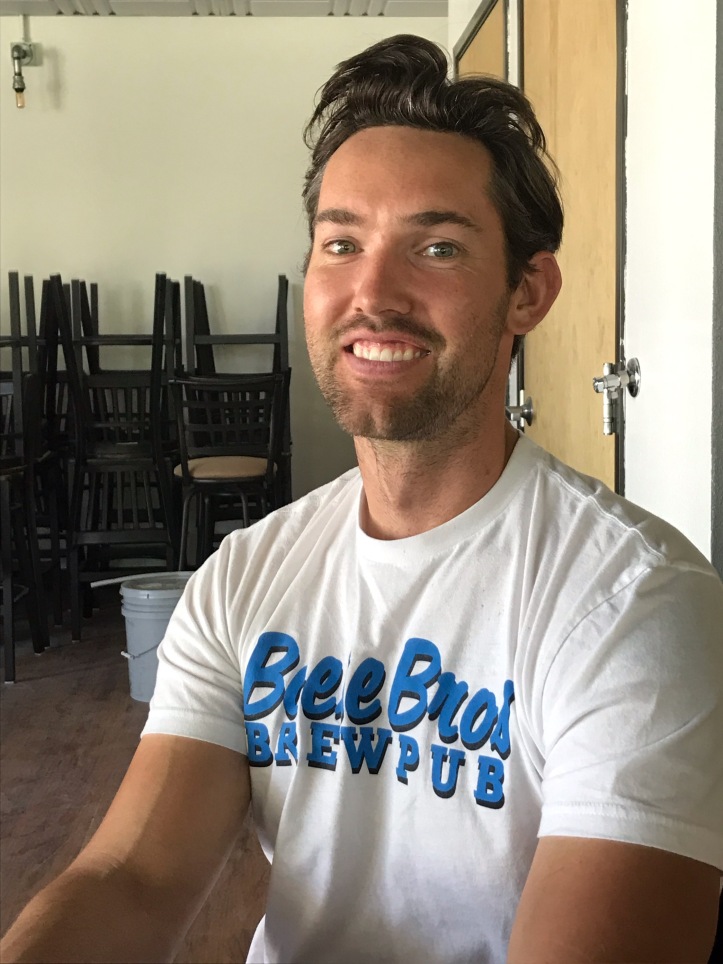 George Boese is working on some of the decorating for the Boese Bros Brewpub in Central Park Square. Photo by Maire O’Neill/losalamosreporter.com

The light fixtures at the Boese Bros Brewpub are part of the new look. Photo by Maire O’Neill/losalamosreporter.com 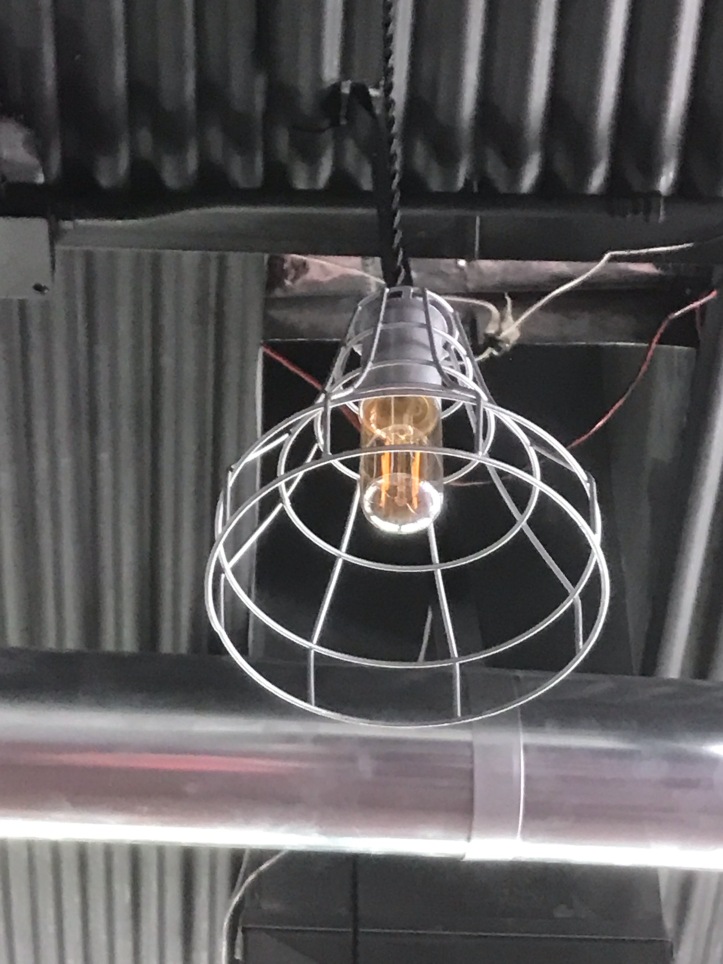 Corrugated metal and Edison style light bulbs are part of the style of the new Boese Bros Brewpub in Central Park Square. Photo by Maire O’Neill/losalamosreporter.com 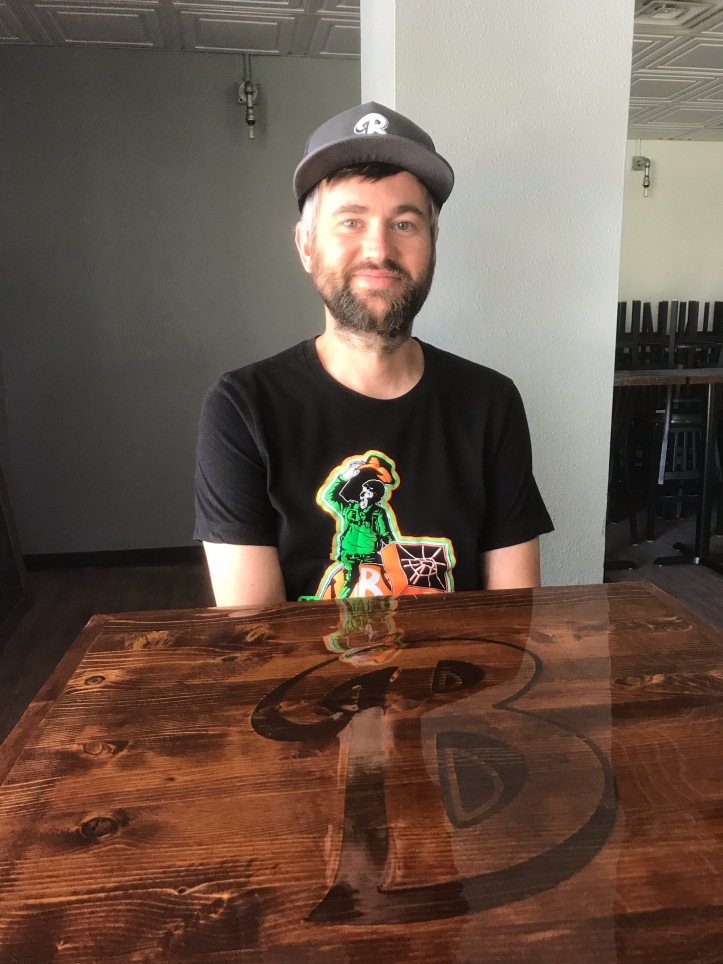 Sam Boese takes are break at the new Boese Bros Brewpub to chat with the Los Alamos Reporter about the brothers’ latest venture. Photo by Maire O’Neill/losalamosreporter.com

Brothers Sam and George Boese are set to open their third brewpub location in New Mexico in August at 145 Central Park Square.

What started as a dream in 2011, materialized in  2014 when they founded Boese Brothers Brewing to create easy-drinking craft beers based on classic styles, while staying true to three core values: family, quality and good time.

The downtown Albuquerque taproom is a former Studebaker dealer founded in 1926 which was later converted into a parking garage. The brothers began working on the neglected building to install power and plumbing as well as overseeing and doing the majority of the build-out for their first taproom. Their brewing system, which supplies all of their taprooms, is also located in downtown Albuquerque and supplies some 30 wholesale customers throughout the state.

The Boese brothers are partners in Desert Dogs Brewery and Cidery in Santa Fe which sells more than 20 beers and ciders brewed by Boese and Desert Dogs. At the end of last year, the brothers opened their second brewpub in a remodeled nail salon at Tramway and Paseo in Albuquerque.

The brothers do much of work on their premises by hand as much as possible and the new Los Alamos location is no exception. A quick look around the Central Park Square location reveals a whole new vibe with Edison style light fixtures and table tops adorned with their “B” logo which they worked on themselves.

George’s wife, Liese, who does all the ink drawings for the Boese Brothers bottles is going to transfer one of those designs into a mural for one of the walls at the new brewpub.

“It’s the design for the Strangelove IPA which is named after Doctor Strangelove in the Stanley movie which is particularly relevant in Los Alamos,
George said.

Prior to getting into the brewing business, George Boese attended the Air Force Academy in Colorado Springs and was stationed at Kirtland Air Force Base during his service term. the whole time he was in. He was a program manager working with several government contractors specifically on modeling and simulation.

Sam Boese lived in Pittsburgh, Penn., for a number of years where he did freelance video and photography work. He also worked for an oil and gas company doing investor relations for a number of years. He worked in breweries for several years and eight years ago attended the American Brewers Guild school in Salisbury, Vermont to learn how to brew.

“I put too much water in the beer and it ended up being a little weaker than we intended so what we ended up doing was dry-hopping it more than we had intended and what we ended up with was this really neat version of a steam beer that was hopped more like a pale ale,” he said. “A steam beer is not something you see very often, but something that’s hopped that much is definitely something you don’t see very often, so that’s probably my favorite beer,” he said.

George said the lager is hit or miss with customers.

“People that like it and enjoy it will drink it all the time but when people think lager they think something that’s light and very easy to drink which we think it is, but it’s a somewhat dark beer with a pretty nice hop bite to it. Sometimes it catches people off guard,” he said.

The brothers have conducted interviews and anticipate having three or four bartenders and probably two or three people working in the kithen.

The food mention will be very similar to the Northeast Heights location where the big sellers are the Reuben sandwich and the green chile grilled cheese.  Eight to 10 cold sandwiches will be on the menu with the same number of panini hot pressed sandwiches.