Rotary Club Of Los Alamos Is Going To Mars!

A close-up of the NASA Boarding Pass for the Rotary Club of Los Alamos. Photo by Linda Hull 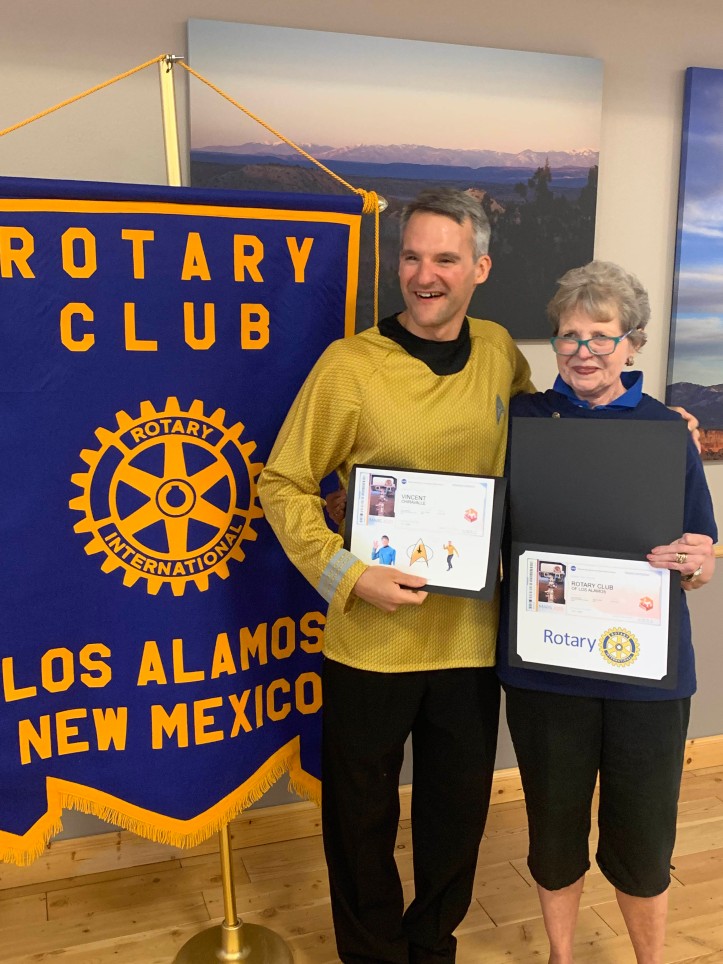 Rotary Club President Vincent Chiravalle, left, with the Boarding Pass to Mars presented to him by Rotarian Linda Hull during the Club’s ‘Star Trek’ end-of-the-year banquet Wednesday evening. Hull holds a similar certificate to Mars for the Rotary Club. Photo by Laura Loy

The Rotary Club of Los Alamos is going to Mars!  (At least in name only). In July 2020, a Mars Rover will launch to search the Red Planet “for signs of past microbial life, to characterize the planet’s climate and geology, to collect samples for future return to Earth, and to pave the way for human exploration.” The spacecraft is expected to touch down on Mars in February 2021.

Although it will be years before the first humans set foot on Mars, the National Space and Aeronautics Association (NASA) is giving the public an opportunity to send their names to the Red Planet with the Mars 2020 Rover.  This is part of a public engagement campaign to highlight missions involved with NASA’s journey from the Moon to Mars.

Thomas Zurbuchen, the associate administrator for this NASA mission, says, “As we get ready to launch this historic Mars mission, we want everyone to share in this journey of exploration.  It’s an exciting time for NASA, as we embark on this voyage to answer profound questions about our neighboring planet, and even the origins of life itself.”

And guess what?  You can ride along, too. (Or at least your name can go to Mars.)  Sending your name to Mars comes with a souvenir boarding pass and “frequent flyer” points.

NASA’s Jet Propulsion Laboratory in Pasadena will use an electron beam to stencil the submitted names onto a silicon chip with lines of text smaller than one-thousandth the width of a human hair.  (That’s 75 nanometers). At that size, more than a million names can be written on a microchip the size of a dime. The chip will ride on the Rover under a glass cover.

This month Rotarian Linda Hull submitted the Rotary Club of Los Alamos for its first travel to Mars, making it the very first Rotary Club in the Universe to have a club on the Red Planet.

Knowing Club President Vincent Chiravalle’s interest in space, particularly Star Trek, Hull submitted Chiravalle’s name to travel on the Mars Rover, too.  His name and the Club’s will launch from Cape Canaveral Air Force Station in Florida in July 2020 and land in Jezero Crater on Mars in February 2021.

According to NASA, “From now until Sept. 30, 2019, you can add your name to the list and obtain a souvenir boarding pass to Mars here: https://go.nasa.gov/Mars2020Pass

Come fly with us!