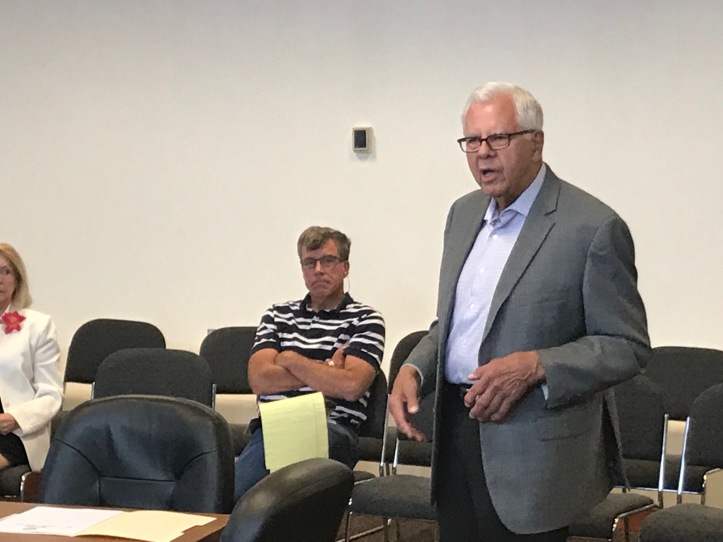 Former State Representative John Heaton, who is vice chair of the Lea-Eddy Energy Alliance, addresses the Regional Coalition of LANL Communities Board Friday afternoon in Espanola. Photo by Maire O’Neill/losalamosreporter.com

On Friday, the same day as Gov. Michelle Lujan Grisham sent a letter to Secretary of Energy Rick Perry and Nuclear Regulatory Commission Chair Kristine Svinicki expressing her opposition to the proposed storage of high-level nuclear waste in the state of New Mexico, the Regional Coalition of LANL Communities board heard from John Heaton in support of the proposed Holtec interim storage facility.

Heaton, the vice chair of the Eddy-Lea Energy Alliance, told the RCLC board, meeting in Espanola, that the Alliance is a group that has made an agreement with Holtec International to sell them 1,000 acres they purchased in 2006. He said the Alliance formed a joint powers between Eddy and Lee Counties and Carlsbad and Hobbs.

“We purchased the land when it was realized that the repository was not moving forward in the country at a very rapid pace and there was a substantial need for interim storage,” he said.

Heaton said the 1,000 acres is a “well-characterized piece of property with good utility access, 35 miles from any population.” He said with the Waste Isolation Pilot Project (WIPP) and URENCO there is a robust scientific and nuclear workforce in the area and that there is strong local support. He said the Alliance had chosen Holtec because they had a subsurface system rather than “bowling pins” – casks sitting on the surface.

“We thought without question that they had the safest system in the world. The main reason we chose them was the safety factor but they also had 60 percent of the used fuel business in the United States. They had a very strong record of safety and they were extremely strong financially compared to the other bidders. They were a very research-oriented company and we thought that would be very good for us and good for New Mexico, bringing other research activities,” Heaton said.

Heaton described the four layers of containment propose for the waste. He said the first layer is the pellet which is about the size of an eraser on a pencil, that enriched uranium is a solid ceramic, “hard, tough to break”.

Heaton said the pellet then goes into a zirconium fuel rod  and the pellets are stacked up in the fuel rod and then it’s welded shut at the top. He said typically about 100 fuel rods go into an assembly and 36 of those assemblies go into the canister. Then the canister is either place on a pad at the site itself and be put into a cask there for storage or it could go into transportation directly but that typically the ones that are already in storage would be transported.

He said the casks are NRC-licensed and that they are tested by Sandia National Laboratory. He described the four steps in testing the casks – free-drop impact, puncture impact, fire and water immersion. Heaton said the casks weigh about 250,000 pounds. For rail travel, he said the rail cars have 12 axels and loaded will weigh about 200 tons.

“The question out of most peoples’ mouths is will the rail tolerate that kind of weight. You have to understand that the engines going up and down the rail all weigh about 425 or 450 tons so they’re in that neighborhood. The distribution of the weight over the axels reduces the pressure on the rail itself,” Heaton said.

He said some 92 percent of the rail system is privately owned and that there is very little public rail in the system. The routes are determined by the Department of Transportation, the NRC and the Federal Rail Administration, Heaton said, adding that those entities choose the best rail and the safest route to the destination. He said before a shipment leaves, the casks are wiped for radiation release and the maximum radiation release allowed at two meters from the cask by the NRC is 10 iper hour.

“So you would have to stand in one place for an hour to get 10 millirem which is about the equivalent of a chest x-ray. The Holtec cask has a designation of 2 millirem so it’s one-fifth of the allowed level of radiation so it’s significantly less. At a distance of 10 meters, you’re looking at about background level,” he said.

Heaton said dedicated trains with seven to 10 cars, including a security car with armed guards will transport the waste and will satellite-tracked and given rail preference to their destination. The fastest the cars will ever travel, he said is 50 mph and as the rail becomes lower quality, the speeds are dropped.

“So actually out in the Carlsbad area where we have the rail the potash companies are using, speeds probably will be in the neighborhood of 10 to 15 mph maximum. All of those affect and reduce the impacts so that’s how they manage all of this,” he said.

Heaton noted that there have been more than 1,300 fuel transports in the United States to date and said there has not been an incident or a release.

“There have been more than 850 fuel shipments by the U.S. Navy across the country all ending up in Idaho without incident or release as well as 30,000 shipments worldwide,” he said. He said for example. WIPP has had more than 12,000 shipments and now they are very close to 14 million loaded miles which is like going to the moon and back 28 times and we have never had a release or an accident that has resulted in anything other than a fender bender more or less,” he said.

Heaton said there has been a huge number of questions about transportation because that is the thing that is most visible and it’s the issue that’s most close to large populations.

“The interesting thing about the transportation is the NRC when they talk about risk, they can’t say zero but they say it’s a billion to one chance of a release and that’s about as close to zero as I think you can get,” he said.

Heaton described how the interim storage area is to be excavated down 30 feet and a pad of reinforced concrete placed on the bottom. On that pad, silos would be put in place which would contain the canister that is shipped in the cask. He said the whole thing is filled with concrete and a three-foot slab of concrete is placed on top. The silos are designed so that they can take other U.S.-based canisters approved one at a time by the NRC.

Heaton said the Alliance was very intent on having incentives for the state and for the local area for economic development.

“We have a contract with Holtec that says we get 30 percent of the gross revenue and that they receive the project and we’re expecting that at least 75 percent goes to the state and that 25 percent stays local. We would hope that goes into highway construction across the state,” he said. “It’s a $2.4 billion capital investment so it’s huge. It’s bigger than some of the ones going on in Las Lunas now that everybody was excited about. We’ll have about 215 what we think will be highly paid jobs as well as the 100 construction jobs that will go on for 10 years and the highly trained engineers handlers and that sort of thing.”

Heaton told the board there will be spin-offs such as an aging program to determine how canisters age in place which he said will bring a whole different group of people.

“We are excited about all this research for the nuclear industry whether it’s the Labs or commercial we think it has a big role to play,” he said.

Heaton noted that that a draft environmental impact statement is expected later this year with the final EIS due in late summer 2020 followed by the NRC review and record of decision. He said conceivably construction could start in late 2020 or 2021 with the first shipment to the facility in 2023.

“We have a 1,500 foot slab of salt underneath this facility so nothing is going to go through it. The oil companies can frack and drill underneath this project without impacting it whatsoever. It’s very benign no pumps no moving parts. It just gets cooler every day,” he said.

In  contrast with Heaton’s position, Governor Lujan Grisham’s letter says a facility like Holtec poses unacceptable risk to New Mexicans she says look to southeastern New Mexico as a driver of economic growth in the state, citing the agriculture, oil and gas industries. She says establishing an interim storage facility in the region would be “economic malpractice” and that any disruption because of a perceived or actual incident would be catastrophic.