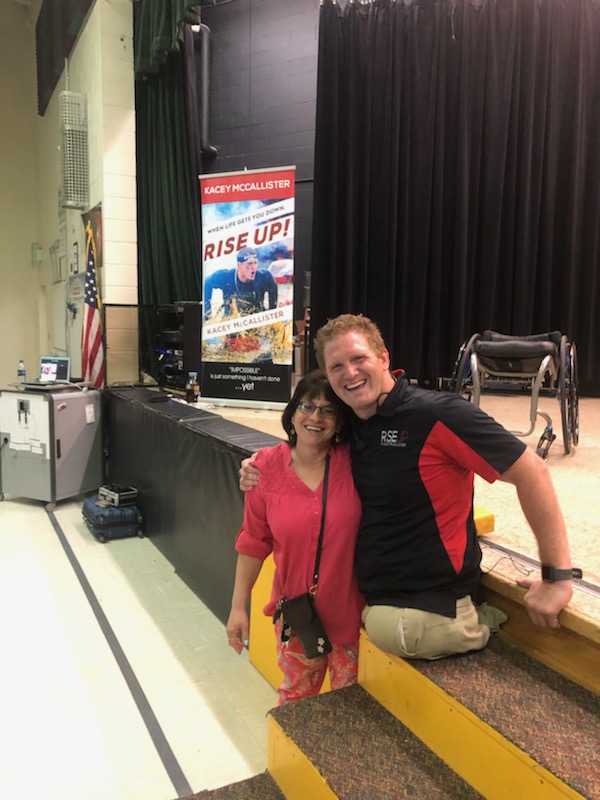 After the students’ initial positive reaction to the YouTube video, Parsons decided to dig deeper and reached out to McCallister on the off chance he would come out to Los Alamos for a presentation. After months of researching, planning, and collaboration between the elementary school staff and PTOs, Parsons’ idea came to fruition. McCallister visited Chamisa, Barranca, and Mountain Elementary schools in May.

McCallister is a double amputee and motivational speaker who lost his legs at age six in an automobile accident. His catchphrase is aptly “Rise Up!” because he not only relearned how to perform everyday tasks, he proved people wrong who told him “no.”

McCalliser has played sports competitively, including holding 2nd place in the state of Oregon for wrestling, and has set an incredible example of overcoming obstacles. He has completed many Sparta races (9 mile obstacle course) on his hands and also finished a 50-mile hike, just to name a few of his athletic accomplishments. He is now married, has four kids, including an adopted boy with special needs, and speaks across the country to many different organizations.

At his presentation in Los Alamos, McCallister broke the ice with lighthearted limb jokes, and then told his life story. More importantly, he explained that “when life gets you down, rise up!” McCallister emphasized that while there will always be obstacles in your life, what matters most is what you do about them.

The students thoroughly enjoyed the presentation, and between the three elementary schools who hosted him, the message reached about 1,200 kids.

School staff also gave a positive reception. Former Chamisa Principal Suzanne Lynne said, “Having Kacey at our school was extremely moving. He is a powerful force for good.”

“Kacey McCallister is probably one of the most inspiring people you could ever meet,” said Mountain Principal Jennifer Kieltyka. “He was able to reach all the students, kindergarten through 6th grade with his story. He used humor to teach the students to never give up no matter what life throws at you.”

As an assignment following McCallister’s presentation, Parsons gave his Language Arts class a writing prompt about overcoming obstacles. The depth of their responses lead Parsons to believe that, because of the enormous challenge McCallister faced, the kids are now able to reflect on their own struggles and find a way to overcome.

Parsons gives this advice to teachers: “If you see something cool, like an awesome motivational YouTube video, reach out because you never know what will come of it.”

To learn more about McCallister’s journey, visit his website here.