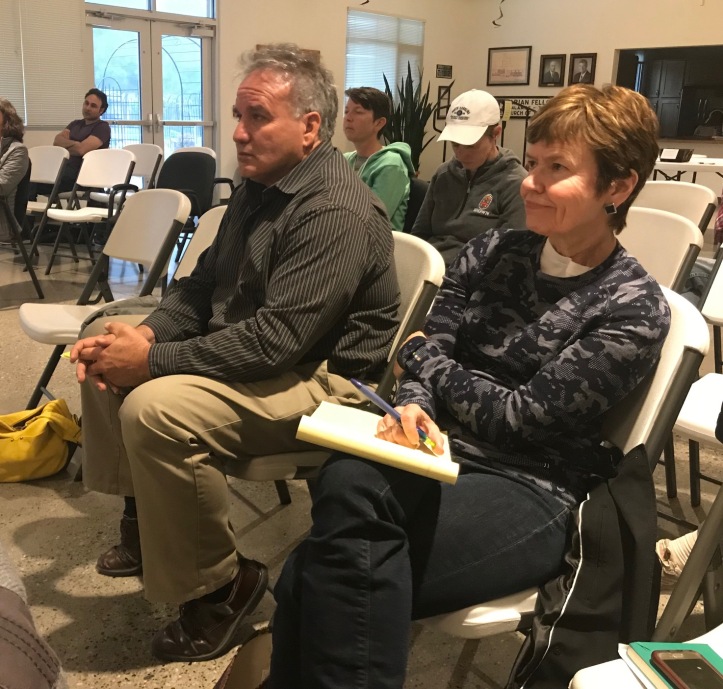 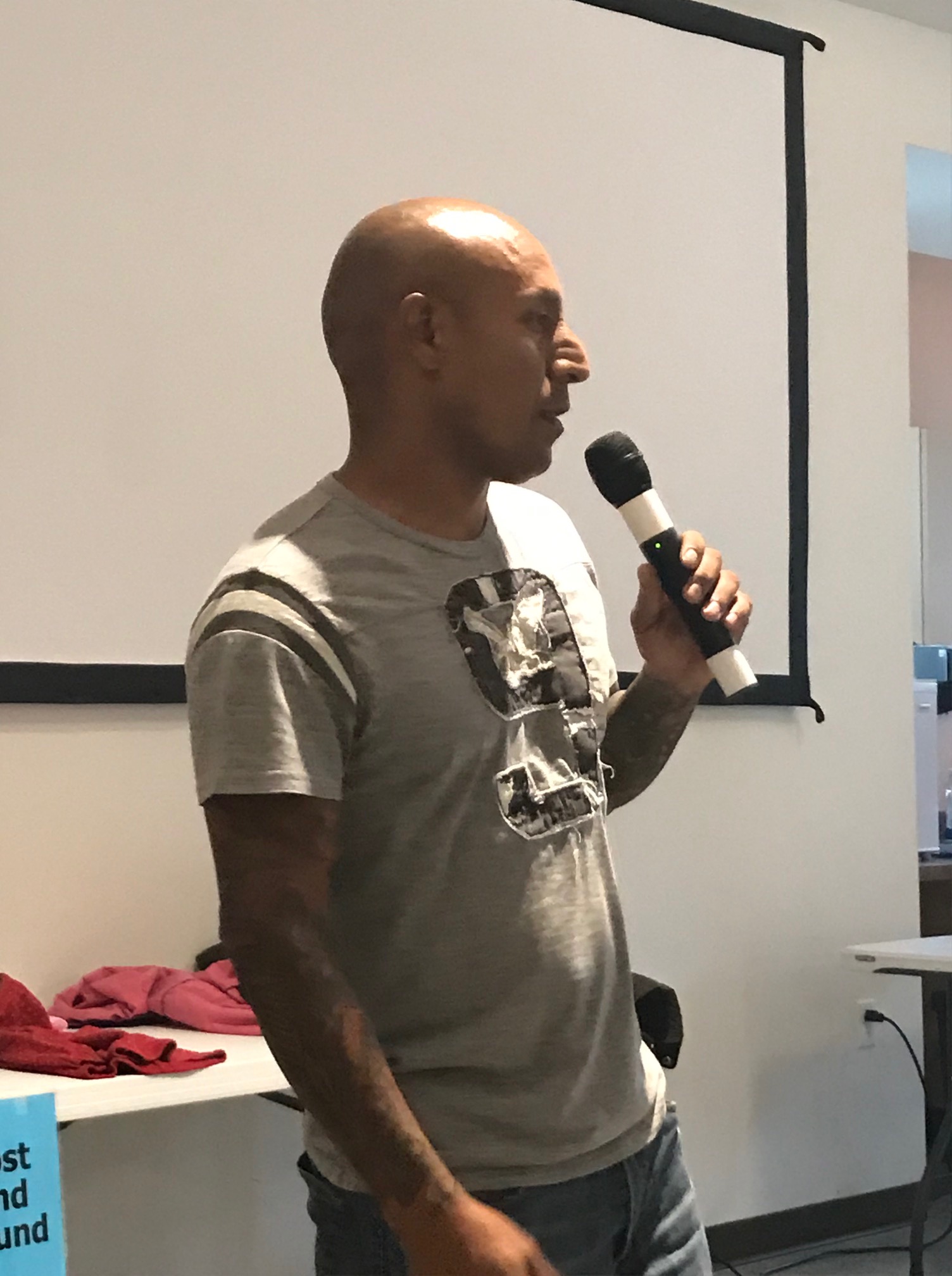 It appears that having a homeless shelter in Espanola is becoming more and more of a reality as government agencies, legislators and nonprofits as well as community groups and individuals throw their support to the project.

Just this week, the board directors of the New Mexico Coalition to End Homelessness (NMCEH) gave its approval for NMCEH to be the fiscal agent for the Espanola Pathways Shelter project. This means that financial donations may be made to NMCEH for the project and will be kept separately in their accounting system.

The NMCEH was founded in 2000 by a group of nonprofit agencies and the New Mexico Finance Authority who saw a need for a statewide coalition to coordinate the efforts of agencies working to combat homelessness.

Speaking before the Voices of Los Alamos Monday evening at the Unitarian Church, Rio Arriba County Economic Development director Chris Madrid described how some $225,000 in operating funds was set aside by Rep. Joseph Sanchez for the shelter project during the legislative session and that the entire delegation has been involved. He was accompanied by Ralph Martinez and Marisol Atkins of the shelter project team. Rep. Christine Chandler was also on hand for the presentation.

Madrid told the group that Martinez is a credible individual that makes things happen.

“He doesn’t just have ideas, he executes those ideas,” Madrid said. He said that in addition to a fulltime job, Martinez successfully for three years has coordinated the Espanola Matanza which he called “a really grand event” that drew thousands of people.

“I think we have a very credible program and opportunity. Taos and Santa Fe have shelters. We haven’t been successful in establishing a shelter but I think this go-around it’s going to happen. But we need all partners – we need government partners, our neighbors, knowledgeable about this and offering support. We have already reached out to the New Mexico Coalition to End Homelessness who will be watching over and managing the process,” Madrid said. “We have a very credible idea and leadership like Ralph who has the ability to talk to audiences and leaders but at the same time can reach back down to the people in need and have those conversations as well.”

Madrid said what’s important is the project is called “Pathways” and is not just about putting a roof over somebody’s head temporarily or providing a shower but that the group has talked to all the entities that provide wrap-around services so immediately when someone comes to the proposed shelter, there’s going to be a triage component because there are a lot of behavioral health and substance abuse issues with the homeless population.

He said people can stay for a while and they will have a case manager but the goal is to find the next location.

“The Coalition is very good at helping people get back into homes. I think there’s a good plan ahead. One of our challenges right now is we’re blessed with operational dollars but unfortunately the way our government works is they compartmentalize operational and capital funds. To get a homeless shelter up we need capital right now. We have some good prospects of locations but we’re going to need dollars to do the tenant improvements,” Madrid said.

Atkins told the group that many of the issues around homelessness and addiction stem from untreated trauma and pain that was caused before age three. She said brain research is emerging that indicates that a lot of who people are as adults really happened between pregnancy and age five when 85 percent of brain development occurs.

“It has been fascinating to me to see how all these issues are intertwined and if we really want to get ahead of homelessness and issues around social ills, we need to invest in moms and dads during pregnancy and the young children,” she said. She said her interest is really how to get upstream in supporting babies, pregnant mothers and families and how to ensure that people have basic dignity and a warm place to live, regardless of what they’ve done or what they’re addicted to or what their experiences are.

“Every person is somebody’s child and somebody’s brother and somebody’s parent and sibling. I could easily be homeless myself and I’m really grateful that I’m not. To me that’s a call for all of us to step up and assist,” Atkins said.

She told the group that in New Mexico, the excuse has been used that the as a state we are poor and can’t change things.

“But while we may be poor in dollars but we are rich in culture, heart, diversity, strength and drive,” Atkins said. “I’m looking around and there are so many opportunities that if we worked together we would have a lot better outcomes. I don’t buy that we don’t have enough money – we just don’t have the right sort of money. A lot of creative people have a lot of ideas that are turning.”

“I’ve been around long enough that every now and then the stars align and the right people start popping up and the synergy happens. We have to jump on those moments because they don’t always stay,” she said. “I feel like we’re in one of those places and I’m psyched. I love that this project involves folks with lived experience and members of the community stepping up and saying, ‘We need to do this and we’re going to do it,’ rather than the state saying, ‘you really need this and we have this problem’.”

She noted that no matter what community is being discussed, needs assessments have found that housing, transportation and behavioral health services are what are needed.

“Now courageous folks are stepping up and taking action and it’s past time. At the end of the day we are our brother’s keeper and ending homelessness benefits all of us even if we don’t care about people. Homelessness impacts the economy and community safety and so many other things so we don’t have to care about it but  logically speaking it makes sense for all of us to work together to end homelessness,” Atkins said.

Martinez stressed the importance of needs management through different types of services they hope to house at Pathways which will give people a foundation under their feet to be able to find what it is that they need and help them get there. He said it is very exciting for the project to be able to accept donations through the NMCEH.

“We have had two community forums in Espanola and we have a Facebook page and people have been reaching out to us asking how they can help. The pieces of the puzzle are falling together and this is a very big piece,” he said.

Martinez said three possible locations are being looked at and the main goal is to get one of them moving along. He noted that the numbers have never been established for the homeless population and that the goal is to have a shelter up and running by Nov. 15 before the first really cold snap.

Asked by members of the audience what help is needed, Atkins responded, “Money, time, commitment, heart. Not necessarily in that order. After the place is decided we will need labor for renovations. Presentation is everything. Want to have a place that makes people welcome validates that they are worthy. It may be  small.but we want it to say, ‘you’re worth something’.

Rep. Christine Chandler discussed the capital needs for the project with the three presenters saying it might be the right time to be working on these things.

“We’ve all spoken about the money that’s been available this year and the expectation is there should be a fair amount of money available in this coming year unless something very strange happens to the oil and gas industry. The expectation is there should be a reasonable amount of capital money for us legislators as well as for other statewide projects. Get your proposal together,” she said.

She noted that she, Rep. Susan Herrera and Rep. Joseph Sanchez all work together well as the three representatives that cover portion of Rio Arriba County.

“We talk together about what we can do, so I look forward to hearing about what’s going on so that we know what you need,” she said.