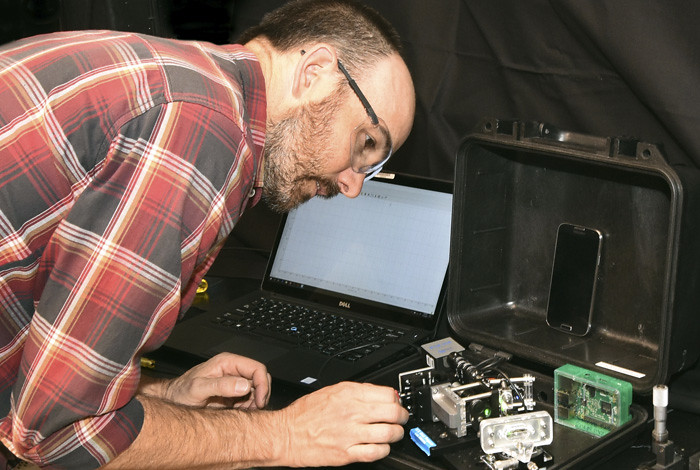 Bacteremia is a leading cause of death for children in sub-Saharan Africa where childhood mortality rates are the highest in the world, and its early diagnosis and treatment can save many lives. However, diagnosing bacteremia is challenging, especially when there is co-infection with diseases such as malaria and HIV. The good news is that research from Los Alamos published in the April 19 edition of Nature Scientific Reports indicates that there may be a way to greatly speed up diagnosis. In the paper, the scientists report on a method for the rapid and accurate detection of bacteremia using a technique that works by mimicking the way the human immune system recognizes pathogens.

Bacteremia is the presence of bacteria in the bloodstream and it can be either asymptomatic or result in a life-threatening infection that includes sepsis. Sepsis, which is when the body’s response to infection causes damage to its own tissues and organs, is the most common cause of global childhood mortality.  Microbial culture, which requires bacterial growth in a petri dish, is the current clinical standard for sepsis diagnosis and it is both slow, insensitive, and not practical for field diagnostics. Because of these limitations there is a pressing need for a rapid and accurate method that can direct therapeutic intervention at the point of need. The work presented by the Los Alamos authors is the first step towards developing such a capability and is inspired by the ability of the human immune system to sensitively detect bacteremia in blood very early in the course of infection by its reaction to pathogen biomarkers.

The researchers developed and clinically validated a novel method for the direct detection of the same pathogen biomarkers that the immune system uses to recognize bacteremia associated with both Gram-negative bacteria and Gram-positive bacteria. The Gram test is a method to broadly categorize bacteria based on their cell wall properties, and it is important to be able to detect bacteremia in all classes of bacteria. These biomarkers interact with host lipoprotein carriers in blood, which allows for their direct detection using two tailored assays developed at Los Alamos called membrane insertion and lipoprotein capture (see figure 1). The detection occurs in a waveguide-based optical biosensor platform that was also developed at Los Alamos. The team also demonstrated the application of these methods for the detection of Salmonella Typhimurium bacteremia and Staphylococcalbacteremia in clinical samples from children in rural Africa, in collaboration with the University of New Mexico. Taken together, these results demonstrate the significance of biochemistry in both understanding of host-pathogen biology, and the development of assay methodology, as well as demonstrating a method for the rapid, sensitive and accurate diagnosis of bacteremia at the point of need.