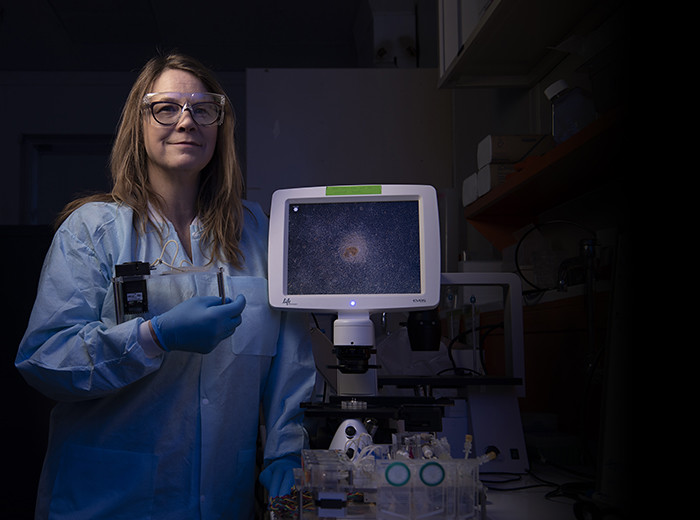 Biologist Jennifer Harris is one of the leaders of the bioengineering capability at Los Alamos National Laboratory. She specializes in creating laboratory-based artificial organs designed to be better preclinical test platforms than animals. Major funding for the PuLMo project is provided by the Defense Threat Reduction Agency. PuLMo is part of the larger ATHENA (Advanced Tissue-engineered Human Ectypal Network Analyzer) program to design an integrated, miniaturized surrogate human organ system that includes the heart, liver, and lung. Photo Courtesy LANL

Intro: From supercomputers to artificial lungs, Los Alamos National Laboratory’s mission is to provide science and technology to meet national security challenges. The Faces of Innovation series focuses on seven scientists and engineers who are pioneering new technology and programs at Los Alamos. Their groundbreaking ideas, experiments, and data have big implications for national security. This article originally appeared in National Security Science Magazine.

Scientists rely on animal testing to show a new drug is safe for the public, but biological differences between humans and animals complicate the testing process. One such difference is simply the air animals and humans breathe. Mice, for example, scamper and sniff at ground level, so their lungs are adapted to life down low, often in filth. Humans walk upright, so their respiratory systems typically breathe higher, cleaner air. These differences mean that mice are imperfect analogs as test subjects for drugs meant for humans. In fact, drugs that have passed animal testing have even proven dangerous to humans.

The need to build a bridge between animal and human studies and effectively test new drugs with minimal risk motivates Jennifer Harris of Biosecurity and Public Health. Harris is one of the leaders of the bioengineering capability at Los Alamos National Laboratory. She specializes in creating laboratory-based artificial organs designed to be better preclinical test platforms than animals.

Harris’ love is the lung, and her team won an R&D 100 Award in 2016 for its work on PuLMo, a miniature human lung model. PuLMo co-cultures many different types of lung cells and replicates the conditions in an actual human lung, even the mechanical stresses of breathing. A PuLMo unit resembles the human organ in cellular function but not in appearance; the model is rectangular, about the size of a shoebox, and features dozens of modular components, including the system’s life support system of valves, tubes, pumps, and reservoirs.

Along with their interest in pharmaceutical applications, bioengineers at Los Alamos are working to adapt the PuLMo technology to identify and counter biological, chemical, and radiological threats. Work is underway to make the technology deployable in two modes depending on the scenario and threat. In one mode, the technology is brought to bear on the battlefield in broad sweeps (such as in a flyover) to “inhale” large amounts of air and characterize potential airborne contaminants before soldiers are exposed to the environment. This grants warfighters critical intelligence about airborne threats and allows them to utilize proper protective gear to prevent human exposure.

In the second mode, the technology operates in a lightweight, wearable device that continuously monitors the air that a soldier breathes, scanning and analyzing potential contaminants. The device would provide immediate actionable intelligence in life-or-death situations, allowing medical personnel to prioritize treatment of soldiers on the battlefield and apply countermeasures.

“To see lung cells grow and perform like they’re supposed to in PuLMo is amazing,” Harris says. As the technology evolves, it promises to serve as a sentinel for respiratory safety anywhere it is deployed.