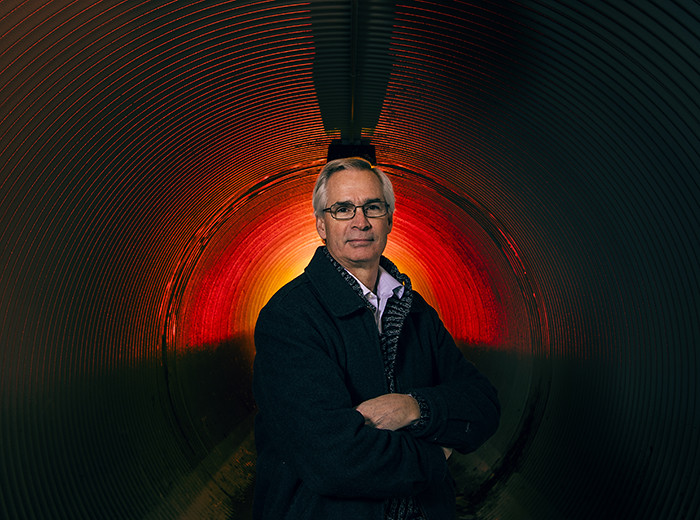 Dave Funk leads Enhanced Capabilities for Subcritical Experiments, one of the initiatives the United States is pursuing “to ensure the necessary capability, capacity and responsiveness of the nuclear weapons infrastructure and the needed skills of the nuclear enterprise workforce,” according to the Nuclear Posture Review presented to Congress in 2018. Photo Courtesy LANL

Intro: From supercomputers to artificial lungs, Los Alamos National Laboratory’s mission is to provide science and technology to meet national security challenges. The Faces of Innovation series focuses on seven scientists and engineers who are pioneering new technology and programs at Los Alamos. Their groundbreaking ideas, experiments, and data have big implications for national security. This article originally appeared in National Security Science Magazine.

Dave Funk has a complicated job. He leads a multi-lab effort to design and build a linear induction accelerator that can take x-rays (radiographs) of the late stages of implosion experiments at NNSS. Not only that, his team has to assemble the accelerator in a tunnel 960 feet underground.

Funk, of the Laboratory’s Accelerator Development Program Office, is the senior director of the Advanced Sources and Detectors (ASD) Project, part of the Enhanced Capabilities for Subcritical Experiments (ECSE), a federally directed portfolio to enable studies of what happens to plutonium during the late stages of its implosion (compression) inside a nuclear weapon. Those studies will take the form of contained implosion experiments that include fissionable, or fissile, nuclear materials. Those materials, however, are not allowed to “go critical,” so the experiments produce no nuclear yield. These noncritical experiments, called subcritical experiments, or subcrits, will be carried out in NNSS’s U1a Complex, a subterranean laboratory.

Starting in the 1960s, U1a was used for underground nuclear tests, but those tests stopped with the 1992 moratorium on U.S. nuclear weapons testing and the advent of science-based stockpile stewardship—experiments and computer simulations that give scientists the confidence they need to ensure the safety, security, and effectiveness of the nuclear weapons in the U.S. stockpile.

The accelerator for which Funk is responsible—Scorpius—will be located in a new U1a tunnel and will be a key ECSE diagnostic tool. The radiographs it takes will allow researchers to analyze exactly what’s happening from the beginning to the end of each experimental implosion. Creating those radiographs requires a lot of high-energy x-rays, which is why the 20-megaelectronvolt (MeV) Scorpius is named after the brightest x-ray source, other than the sun, that is visible from Earth.

The ability to take radiographs of subcritical experiments is the biggest difference between Scorpius and the Dual-Axis Radiographic Hydrodynamic Test (DARHT) facility at Los Alamos, which has been used since 2000 for hydrodynamic implosion experiments. These “hydros” get so hot that the imploded materials melt and flow like water. DARHT takes up to five high-speed radiographic images of a mock-nuclear device (it contains no fissile materials), capturing the images as the device implodes at speeds greater than 10,000 miles an hour. Data from the radiographs are compared with high-performance computing simulations that predict how well a real nuclear weapon will perform.

“While DARHT provides multiple high-quality radiographic images of the late-time implosion of weapons containing surrogate (nonfissile) materials, Scorpius will provide, for the first time in the United States, the same radiographic imaging capabilities as DARHT, but on experiments that contain fissile materials such as plutonium,” explains Technical Director Mark Crawford, who oversees the development and implementation of the radiographic system.

Because Scorpius will radiograph subcritical implosion experiments containing plutonium, scientists hope to learn a lot about how this fissile material acts in the later stages of an implosion. Plutonium is a key element in current U.S. nuclear weapons, some of which are more than 40 years old.

“Scorpius will be used to help us learn more about aging plutonium,” explains Funk, noting that newfound knowledge will be coupled with data from past experiments and underground testing. “As we learn more, we’ll be able to make our weapons safer and more secure.”

Mining—aka drilling—the 420-foot-long tunnel for Scorpius is currently underway. After the soil and rock are hauled up an 8-foot-square elevator shaft, the accelerator’s parts will be sent down the same shaft for assembly underground. Three-dimensional computer models are being used to work out the logistics of building a 300-plus-foot-long accelerator composed of an injector, 72 cells, a transport region, and an x-ray converter target.

Entombment drifts (tunnels) will also be mined. After each experiment, the six-foot spherical containment vessels in which the experiments occur will be “entombed”—placed at the end of one of these tunnels and sealed off to isolate and contain the nuclear material.

“The biggest challenge for us in building Scorpius has been to develop the necessary accelerator architecture and technologies that will enable multi-image radiography in the very limited space of the underground tunnels where the experiments must occur,” Crawford explains. “We have strived to build on the technology base from DARHT wherever possible, but we will be using a novel solid-state (electronics) pulsed-power system developed by Lawrence Livermore National Laboratory.”

This innovative pulsed-power system allows for higher-quality images and the ability to take radiographs at very specific intervals. In this system, Scorpius generates high-energy electron pulses that are timed by the scientists and may be as close together as 200 nanoseconds (billionths of a second). Energy is added to the electrons as they travel the length of the accelerator. Near the end, magnets focus electrons onto a target that converts the electron pulses to x-rays. As the x-rays go through the test device (the imploding subcritical experiment), they are converted to normal light in a scintillator. That light is recorded by a camera. (Of course, a camera that can capture four images as close together as 200 nanoseconds doesn’t exist yet, but MIT Lincoln Labs is partnering with the Laboratory to change that.)

Scorpius is expected to be operating by 2025. Its first set of experiments will focus on the W80-4, a nuclear warhead currently going through a life extension program (LEP) that will keep it in use in U.S. air-launched cruise missiles far into the future. Los Alamos designed the original W80 in 1976, and Lawrence Livermore National Laboratory is overseeing the LEP.

The multi-lab history of the W80 makes that warhead a fitting subject for tests at U1a. Scorpius, after all, is a multi-lab project. “This is a closely coordinated effort between Los Alamos, Livermore, Sandia, and NNSS,” Crawford says. “The coordination is necessary not only because of the broad range of technical skills required to bring the system to completion, but also because no single site can provide the necessary number of people for the project while still meeting other institutional priorities.”

In addition, “with a planned lifetime of 30 years, Scorpius, with the capabilities it will bring to NNSS, will help us train the next generation of experimentalists and weapons designers across the entire DOE complex, ensuring the strength of our deterrent for decades to come,” Funk says.