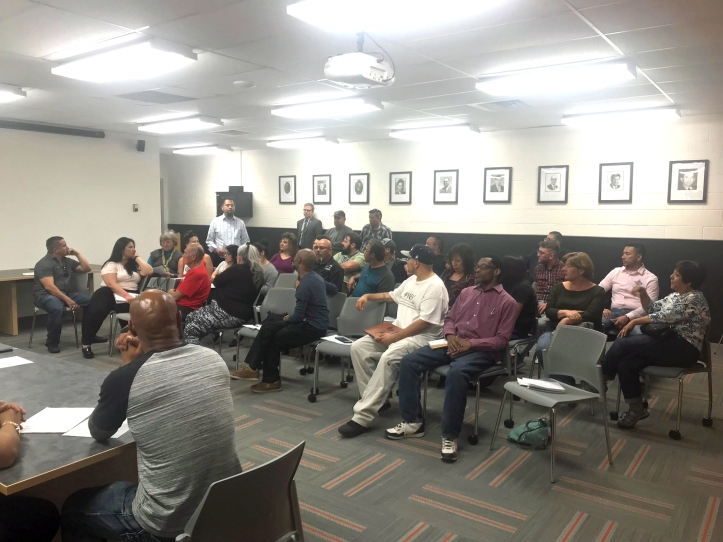 Attendees at a meeting for the Espanola Pathways Shelter Project Monday evening in Espanola introduce themselves and explain their interest or involvement with the homeless community. Photo by Maire O’Neill/losalamosreporter.com 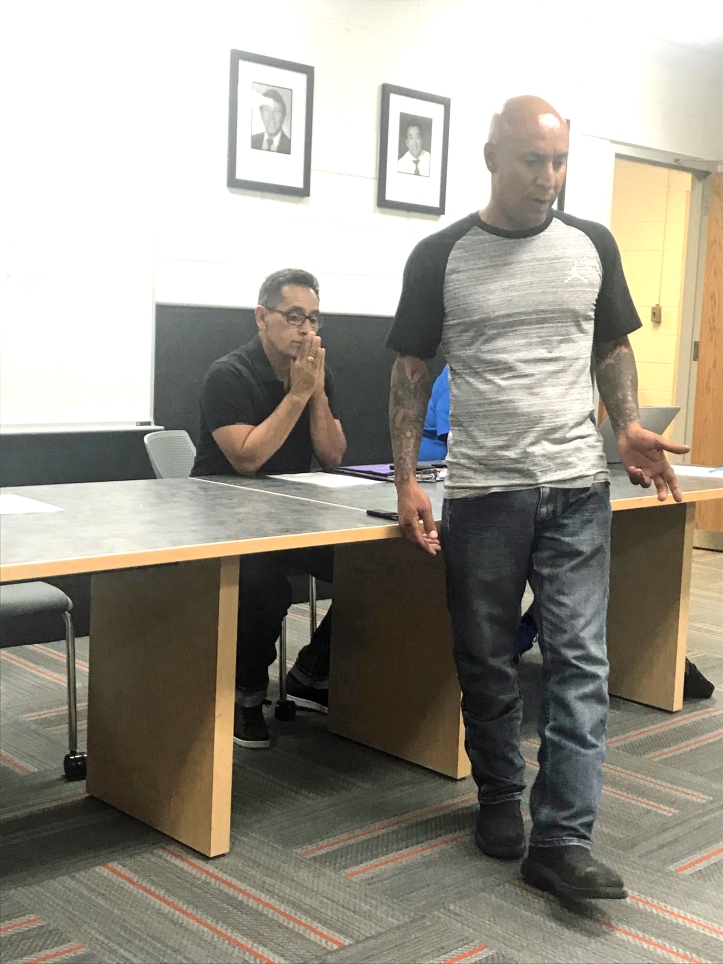 Espanola Pathways Shelter Project organizer Ralph Martinez speaks of the time between 2006 and 2012 that he lived as a homeless person in the Espanola community. Photo by Maire O’Neill/losalamosreporter.com

The goal of establishing a 20-bed low barrier homeless shelter in Espanola for men and women ages 18 and older is closer to becoming a reality, organizers of the Espanola Pathways Shelter Project told some two dozen people gathered Monday evening at the Mayor’s Conference Room in the Espanola Public Library.

Montoya said homelessness is a really big issue, not solvable by any one person. He said the testimonials and breadth of experience of those in the room gave him goosebumps and that the whole community is responding in the most incredible way.

“The latest bit of really amazing news is that Rep. Joseph Sanchez in District 40 decided to make an appropriation of $225,000 that will be, God willing, reoccurring. We have a pretty strong promise (there’s always the potential that it won’t be reoccurring) for the four years that Gov. Michelle Lujan Grisham is in office. It could be eight years and it could also be expanded,” he said adding that the funds are to be used for leasing, utilities, supplies and potentially for moving in portable structures.

Montoya said the mission of EPS is simple – to improve the lives of homeless men and women.

“It’s pretty general but you get the picture. A growing coalition of individuals and organizations have made significant progress towards collective impact. We believe that we have an ethical and moral and economic obligation also to public safety to act on this,” he said. “So, once we got this money, it suddenly became real. We started this just before Christmas. We’re only four and a half months in and things are really starting to happen”

Montoya said what’s so critical is that the Espanola community has the capacity, the vision and certainly the heart to do something extraordinary, not just a Band-Aid, but something really beautiful. He listed the many resources already involved such as Northern New Mexico College, Presbyterian Hospital, St. Martin de Porres Soup Kitchen, a coalition of multiple faith-based organizations, Habitat for Humanity and local banks.

“We have the capacity, what we need most is a plan – thinking about love, creativity, science, the notion of a laboratory and critically measuring who we’re serving, how we’re serving, and how we can do this with grace and dignity and elegance. It’s an opportunity to take a serious adversity and turn it into an opportunity that can feed us all. The art of the possible,” Montoya said. “Speaking pragmatically, the money will start flowing by July 1 and we need to have a plan in action because we made a commitment to the community that by the first cold snap in November we will have a place however humble somewhere in the city. “

Montoya said EPS is working very creatively with the City and the County to identify properties that would be appropriate for the proposed facility. The location currently being considered is a city-owned lot near the Head Start School on North Railroad Avenue.

“The City has identified a potential property and it’s not cut in stone, but there’s a piece of property there that could be leased and the infrastructure could be paid partially perhaps by this funding,” he said. “We’re thinking about portable buildings – there are many scattered across the landscape. We will need to retrofit them and create different stages of service, from the drop-in center for men and women separate, bathroom facilities, sleeping quarters, administration, an assessment entrance and most importantly the case management piece and this notion of crisis triage.”

Montoya said Hank Hughes, executive director of the New Mexico Coalition to End Homelessness, has agreed to be the fiscal agent for the project for the first two years and would help set up non-profit status if necessary. He said the funds would be managed by a comptroller and the facility would have a house manager.

“My secret wish is that Ralph Martinez could be placed in that capacity. I’m going to put it out publicly that Ralph might serve in that position,” he said.

Mayor Sanchez, speaking at the end of the meeting said there had been comments that he wanted to reduce violence and homelessness.

“In the call to action for the reduction of violence, I found out immediately that it wasn’t violence we were trying to reduce. it was trying to give children an opportunity to be a part of their community, to grow in it and to find the strength in it to become better people. That’s what reduces the violence. That’s what reduces homelessness,” Sanchez said. “When we give children the idea that we are here to take care of them, that education will set them free, that learning with their hands whether it be vocational jobs or planting seeds – those are the actions that reduce violence and the actions that reduce homelessness and that’s why we are all here today.”

He said he doesn’t care if he drops the homelessness rate one percent or two percent.

“Those are lofty goals. I think in order to be long-term genuine to ourselves and show the successes that we’re going to have, we need to really imagine that we are here to help our community. I appreciate the idea that we are not going to be discriminating against anybody – man, woman, gender, anything like that. Somebody that’s homeless from here has just the same need as a homeless person that came to us from New Zealand or Washington State,” Sanchez said. “But realistically, living in this community, we want to help our own and I think that when we make a goal of trying to do that, that’s going to be a technicality you’re going to have to figure out. How do we help those in our community first without breaking those barriers of discrimination? I think that’s a reality that we have to look at.”

For more information on the Espanola Pathways Shelter Project, visit their Facebook page.