Petition Signed By Whitehead, Shin And Others On Tuesday’s County Council Agenda 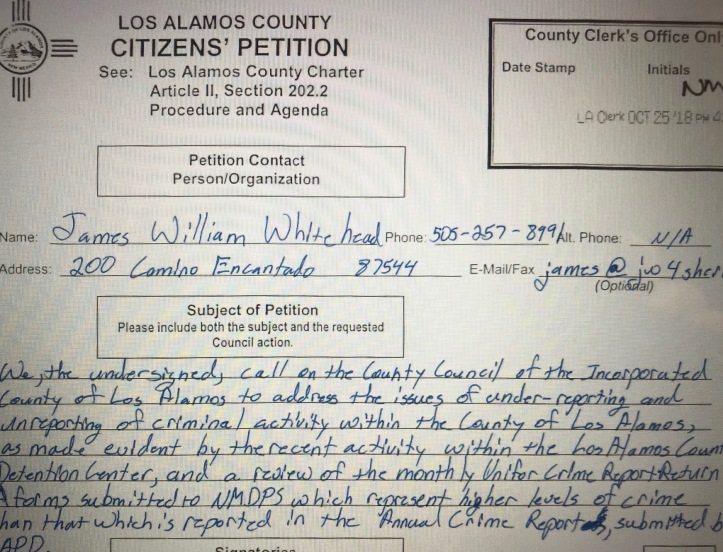 The petition, which is on the agenda for Tuesday evening’s Council meeting reads as follows:

“We, the undersigned, call on the County Council of the Incorporated County of Los Alamos to address the issues of under-reporting and non-reporting of criminal activity within the County of Los Alamos as made evident by the recent activity within the Los Alamos County Detention Center and a review of the month by month Uniform Crime Report Return A forms submitted to (New Mexico Department of Public Safety) which represents higher levels of crime than that which is reported in the Annual Crime Report submitted by LAPD.”

Whitehead told the Los Alamos Reporter Monday afternoon that he is not prepared to make a statement on the petition at this time.

Whitehead addressed the Council during its Oct. 30 meeting in White Rock under the public comment item on the agenda. He said his first concerns involved “the Marion Loope case regarding the four phone calls and the letter that was sent to a victim within our community”.

“I would like for this county to take action to investigate or identify how these failures to comply with policy within the Los Alamos Detention Center have led to this further victimization of this family,” he said.

He said he also wanted to bring Council’s attention to the information he “witnessed in the Youth Risk and Resiliency Survey”.

The YRRS is a joint project of the New Mexico Department of Health and the New Mexico Public Education Department along with the University of New Mexico Prevention Research Center. The 2017 YRRS report for Los Alamos County indicates that the survey was taken by 349 students – 194 girls and 155 boys – in grades 9-12.

“I urge the community to not just get lost in the first few pages that kind of sugar-coat these results. We actually have a significant problem with violence within our community. Young people being forced to perform sexual acts by anyone,” Whitehead said. “I was actually shocked to see how many children have actually brought weapons to our schools and how many children have experimented with drugs. I assume it’s an experimentation with drugs – that’s something that I’m projecting onto the statistic.”

Marion Loope, mentioned by Whitehead is an inmate of the Los Alamos County Detention Center. Harassment charges were filed against her in connection to calls she has made and letters she has sent to people in the Los Alamos community.

Los Alamos Magistrate Court documents in the case indicate that Heather Ortega, one of those who signed the petition filed by Whitehead, received three voice mails from Loope between June 27 and Oct. 10. The statement of probable cause filed by Los Alamos Police Cpl. Dominic Perez states that the messages that were left were “vague and harassing in nature”. The messages were left from a phone number assigned to the LADC. Perez’s report indicates that Loope also sent a letter to Ortega.

Loope was originally arrested following an incident in which she allegedly became angry with her mother, threw a cup of hot coffee at her, grabbed her head, took off her glasses and began beating her mother’s head against a door frame. Loope then allegedly grabbed her mother and tried to strangle her and grabbed a knife, which she held at her mother’s throat. She was charged with aggravated battery with a deadly weapon against a household member and battery against a household member.

Loope has been incarcerated since her arrest and is slated for a District Court docket call before First Judicial District Judge Jason C. Lidyard Dec. 19. A pre-trial hearing is scheduled in Magistrate Court for Nov. 29.

The third issue raised by Whitehead is his ongoing claim that crime statistics reported by LAPD Chief Dino Sgambellone to the New Mexico Department of Public Safety and those presented in the LAPD Annual Report to the County Council are inconsistent. Whitehead emailed Sgambellone in May alleging the discrepancies and Sgambellone responded explaining why the statistics look different and included a handbook on Uniform Crime Reports.

In a June 13 newspaper interview Sgambellone said his numbers are right. He said LAPD takes pride in thoroughly and accurately reporting and analyzing its data.

“We are a nationally accredited department and our reporting methods were examined and scrutinized during the accreditation process. It’s unclear what Mr. Whitehead’s intent is here as we have not spoken in person and I have not heard back from him since I provided him with the UCR handbook last month,” Sgambellone said at that time. He also noted that as with any citizen, he would be happy to sit down with Whitehead and explain the information he had sent to him.

The County Council meeting is slated for 6 p.m. at the Municipal Building, 1000 Central Ave., Los Alamos.