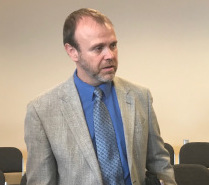 A meeting of the Regional Coalition of LANL Communities scheduled for Friday has been canceled and rescheduled for Oct. 19 in Los Alamos, executive director Eric Vasquez announced Tuesday. Vasquez said the cancelation was due to a change in the availability of the scheduled presenter which he said was Los Alamos National Security.

Members of Los Alamos County Council believe the RCLC needs to dig further into reimbursements improperly made and monies improperly spent since the RCLC’s inception, including Council vice chair Chris Chandler who said at the Sept. 6 Council special meeting to discuss the Adams + Crow report that there is not a consensus necessarily between the report issue by the State Auditor’s Office and the Adams + Crow report paid for by the County.

Chandler said the wants to know what plan the RCLC has to some conclusion as to what monies should be collected back from those making requests for reimbursements which were made with public monies.

“The RCLC was responsible for managing the public funds that they were entrusted with and I believe it is RCLC that needs to get to the bottom of what was misspent or improperly spent over the years and ensure that those monies are collected appropriately and reimbursements are sought from those individuals who received the improper reimbursements,” Chandler said.

Chandler said it is time to start expecting the RCLC to exercise the responsibilities vested in it. She suggested giving the new RCLC executive director a little time and allowing the organization to get back up to speed and then to come before the Council to explain what has been done in terms of improving business practices and ensuring that monies spent have been collected from appropriate parties. She said at that time the County could evaluate what role it wants to play if any in RCLC if the Council is satisfied that the errors and mismanagement have been corrected.

Council Chair David Izraelevitz said at the Sept. 6 meeting that revisiting the County’s fiscal and other agency to a lot of its outside organizations is appropriate.

“We are in cases not just fiscal agent but we have more implied responsibilities and we should be looking to whether those are appropriate, whether those are kind of a historical accident that we started having them and now the organizations have become mature enough that they can start handling it on their own. I think we need to be careful that we do it without hurting the organizations that we feel have provided value to the County,” he said.

Izraelevitz said he agrees the County needs to come to get to the bottom of what has been spent and strongly agrees that the proper party to do that is the RCLC so that they can provide according to the expectations of their own board, the legal and accounting resources that they merit.

He said he wishes the Adams +  Crow report had been more thorough.

“I wish they had interviewed key staff. I was also interviewed by Adams + Crow but again it was a preliminary discussion and when they wanted to talk to me I expected them to ask me about what my role had been. It was not about that at all and they did not call me and apparently they did not call others either so there’s a disappointment. A lot of the questions would have been resolved if there had been more of a conversation,” Izraelevitz said.

He said he also doesn’t want to “throw out the baby with the bath water” because the RCLC has been of immense value to the County.

“I wish Los Alamos County was the beloved member of Northern New Mexico but we have to understand that Los Alamos is different. We are wealthier. We have some issues that are in common with other counties and some of them are very different, so when we can find those areas of common interest and concern, whether it’s environmental clean-up, economic development or transportation, we need to almost celebrate those and take advantage of those and come together and present those as a unified front and that’s where the RCLC has shown the best,” Izraelevitz said.

Councilor Susan O’Leary, who along with former Councilor James Chrobocinski requested the independent investigation that was conducted by Adams + Crow, expressed her disappointment that County tax dollars were used by the RCLC the way they were for so long. She said as someone who has watched the County’s interaction with the RCLC from a distance she would have to characterize the organization as “something of a County Council pet project”, adding that she did not mean that in a negative way because pet projects can be good projects”. She said the RCLC has received enthusiastic support from some Council members and yet there is no or very little mandate from the general public for the entity.

“Most Los Alamos citizens have no idea about the existence of the RCLC or the County’s financial commitment to it,” O’Leary said.

O’Leary suggested that the County continue the independent investigation to go back to the start of the RCLC in order to document all improper expenses, to request payment from the individuals involved and to return the money to the County so that it can be used for legal and appropriate County business. She also believes the County should cease its role as fiscal agent for the RCLC because it’s time for the RCLC to take responsibility for the work that the County has been doing.

“The County has, I’m sure with very good intentions, over-reached in its support and management of this organization and we need to step back. I also think the County should cease funding or minimally fund the RCLC based on a number of things, one of which is the fact that something like this has happened. We need to see that our money is going into an organization that is going to use it in a good way,” O’Leary said. She added that she is not recommending that the RCLC be disbanded, but that the current structure has failed to provide a viable entity and that change needs to be made.

“There are alternative ways to achieve the RCLC’s regional communication and policy objectives. Those things are really good and important things. Personally, I don’t think the organization needs an executive director. I think it needs an auditing firm and financial support. I think having an executive director allows the board members to not fulfil their responsibilities in the way that they should. What we need to see is more dedication and commitment from all its member communities and be a working group that operates without a dedicated budget, especially a travel budget, but rather than what it has been which is an executive board that lacks accountability and has been overly-pampered. This can be achieved by setting higher expectations about the roles and responsibilities of its members”, she said.

Also on Wednesday, David Carl, a spokesman for Attorney General Hector Balderas would only confirm that the Office of the Attorney General has received a public referral and that the matter is under review concerning a request from officers of Northern New Mexico Protects for Balderas to conduct a criminal investigation of the findings of reports by the State Auditor’s Office, Adams + Crow and Los Alamos County.

“All complaints received by the Office of the Attorney General are fully reviewed and appropriate action is taken, but we remain deeply concerned about any misuse of public funds by officials,” Carl said.